From Wikipedia, the free encyclopedia
"Tussauds" redirects here. For the company, see The Tussauds Group.
Wax museum in London 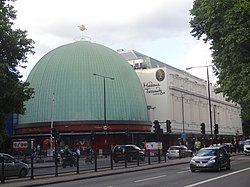 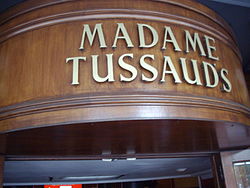 Madame Tussauds ( UK: /tjuːˈsɔːdz/, US: /tuːˈsoʊz/) [1] [N. 1] is a wax museum in London; it has smaller museums in a number of other major cities. It was founded by wax sculptor Marie Tussaud in 1835. It used to be spelled as "Madame Tussaud's"; the apostrophe is no longer used. [2] [3] Madame Tussauds is a major tourist attraction in London, displaying the waxworks of famous and historical figures, as well as popular film and television characters played by famous actors.

Marie Tussaud was born as Marie Grosholtz in 1761 in Strasbourg, France. Her mother worked for Philippe Curtius in Bern, Switzerland, who was a physician skilled in wax modeling. Curtius taught Tussaud the art of wax modelling beginning when she was a child. He moved to Paris and took his young apprentice, then only 6 years old, with him. [4]

Grosholtz created her first wax sculpture in 1777 of Voltaire. [5] At the age of 17, she became the art tutor to Madame Elizabeth, the sister of King Louis XVI of France, at the Palace of Versailles. During the French Revolution, she was imprisoned for three months and awaiting execution, but was released after the intervention of an influential friend. [4] During the Revolution, she made models of many prominent victims. [6]

Grosholtz inherited Curtius's vast collection of wax models following his death in 1794. For the next 33 years she travelled around Europe with a touring show from the collection. She married Francois Tussaud in 1795 and took his surname. She renamed her show as Madame Tussaud's. In 1802, she accepted an invitation from Paul Philidor, a lantern and phantasmagoria pioneer, to exhibit her work alongside his show at the Lyceum Theatre, London. She did not fare particularly well financially, with Philidor taking half of her profits.

She was unable to return to France because of the Napoleonic Wars, so she traveled throughout Great Britain and Ireland exhibiting her collection. From 1831, she took a series of short leases on the upper floor of "Baker Street Bazaar" (on the west side of Baker Street, Dorset Street, and King Street in London). [7] This site was later featured in the Druce-Portland case sequence of trials of 1898–1907. This became Tussaud's first permanent home in 1836. [8] 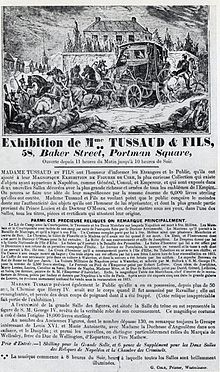 By 1835, Marie Tussaud had settled down in Baker Street, London and opened a museum. [9] One of the main attractions of her museum was the Chamber of Horrors. The name is often credited to a contributor to Punch in 1845, but Tussaud appears to have originated it herself, using it in advertising as early as 1843. [10]

This part of the exhibition included victims of the French Revolution and newly created figures of murderers and other criminals. Other famous people were added, including Lord Nelson, the Duke of Wellington, Henry VIII and Queen Victoria. [11]

Some sculptures still exist that were made by Marie Tussaud herself. The gallery originally contained some 400 different figures, but fire damage in 1925, coupled with German bombs in 1941, severely damaged most of such older models. The casts themselves have survived, allowing the historical waxworks to be remade, and these can be seen in the museum's history exhibit. The oldest figure on display is that of Madame du Barry, the work of Curtius from 1765 and part of the waxworks left to Grosholtz at his death. Other faces from the time of Tussaud include Robespierre and George III. In 1842, she made a self-portrait, which is now on display at the entrance of her museum. She died in her sleep in London on 16 April 1850. [12] 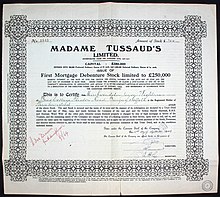 By 1883, the restricted space and rising cost of the Baker Street site prompted her grandson Joseph Randall to commission construction of a building at the museum's current location on Marylebone Road. The new exhibition galleries were opened on 14 July 1884 and were a great success. [13] But Randall had bought out his cousin Louisa's half share in the business in 1881, and that plus the building costs resulted in his having too little capital. He formed a limited company in 1888 to attract fresh capital but it had to be dissolved after disagreements between the family shareholders. In February 1889 Tussaud's was sold to a group of businessmen, led by Edwin Josiah Poyser. [14] The first wax sculpture of a young Winston Churchill was made in 1908; a total of ten have been made since. [15] The first overseas branch of Madame Tussauds was opened in Amsterdam in 1970. [16]

On 17 July 2007, as part of the financing for the Tussauds deal, Merlin sold the freehold of Madame Tussauds to private investor Nick Leslau and his investment firm Prestbury under a sale and leaseback agreement. [20] Although the attraction sites are owned by Prestbury, they are operated by Merlin based on a renewable 35-year lease. [18] 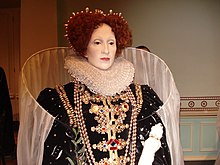 Waxwork of Elizabeth I in London

Madame Tussaud's wax museum became a major tourist attraction in London. Until 2010 it incorporated the London Planetarium in its west wing. A large animated dark ride, The Spirit of London, opened in 1993. Today's wax figures at Tussauds include historical and royal figures, film stars, sports stars, and famous murderers. It has been known since 2007 as "Madame Tussauds" museums (no apostrophe).

In July 2008, Madame Tussauds' Berlin branch became embroiled in controversy when a 41-year-old German man brushed past two guards and decapitated a wax figure depicting Adolf Hitler. This was believed to be an act of protest against showing the ruthless dictator alongside sports heroes, movie stars, and other historical figures. The statue has since been repaired, and the perpetrator has admitted that he attacked the statue to win a bet. [21] The original model of Hitler was unveiled in Madame Tussauds London in April 1933; it was frequently vandalised and a 1936 replacement had to be carefully guarded. [22] [23] [24] In January 2016, the statue of Adolf Hitler was removed from the Chamber of Horrors section in the London museum in response to an open letter sent by a staff writer of The Jewish Journal of Greater Los Angeles, followed by significant support for its removal from social media. [25]

Entry of Madame Tussauds in Berlin

Madame Tussauds opened in Hollywood in 2009

Celebrity poses with their wax figures

Many times celebrities pose like their wax figures as pranks and publicity stunts.

The amateur tenor, whose vocal villainies
All desire to shirk,
Shall, during off-hours
Exhibit his powers
To Madame Tussaud's waxwork. 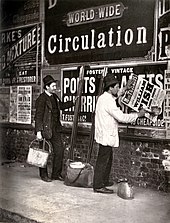 Advertising man pasting a bill for Madame Tussaud's Chamber of Horrors, London 1877. Early exhibits included Burke and Hare. The chamber closed on 11 April 2016 and was replaced by the Sherlock Holmes Experience. [64]