From Wikipedia, the free encyclopedia
People based in the Korean Peninsula and Manchuria

Koreans mainly live in the two Korean states: North Korea and South Korea (collectively and simply referred to as just Korea). Korean people are considered the 16th largest ethnic group in the world. They are also an officially recognized ethnic minority in China, Japan, Singapore and Vietnam, plus in a number of post-Soviet states, such as Russia, Kazakhstan and Uzbekistan. Over the course of the 20th century, Korean communities have also formed in the Americas (especially in the United States and Canada) and Oceania.

As of 2020, there were an estimated 8.3 million ethnic Koreans residing outside Korea. [4]

In the chorus of the South Korean national anthem, Koreans are referred to as Daehan-saram ( Korean: 대한사람, lit. 'Korean people').

Ethnic Koreans living in Russia and Central Asia refer to themselves as Koryo-saram ( Korean: 고려 사람; Cyrillic: Корё сарам), alluding to Goryeo, a Korean dynasty spanning from 918 to 1392.[ citation needed]

Modern Koreans are suggested to be the descendants of the ancient people from Manchuria, Mongolia and southern Siberia, who settled in the northern Korean Peninsula. [18] [19][ page needed][ verification needed] Archaeological evidence suggests that proto-Koreans were migrants from Manchuria during the Bronze Age. [20] According to most linguists and archaeologists with expertise in ancient Korea, the linguistic homeland of proto-Korean and of the early Koreans is located somewhere in Manchuria, particularly the Liao river. Later, Koreanic-speakers already present in northern Korea started to expand further south, replacing and assimilating Japonic-speakers and likely causing the Yayoi migration. [21] [22] Whitman (2012) suggests that the proto-Koreans arrived in the southern part of the Korean Peninsula at around 300 BCE and coexisted with the descendants of the Japonic Mumun cultivators (or assimilated them). [23] Vovin suggests Old Korean was established in southern Manchuria and northern Korean peninsula by the Three Kingdoms of Korea period, and migrated from there to southern Korea during this period by Goguryeo migrants. [24]

The largest concentration of dolmens in the world is found on the Korean Peninsula. In fact, with an estimated 35,000-100,000 dolmen, [25] Korea accounts for nearly 70% of the world's total. Similar dolmens can be found in Manchuria, the Shandong Peninsula and the Kyushu island, yet it is unclear why this culture only flourished so extensively on the Korean Peninsula and its surroundings compared to the bigger remainder of Northeastern Asia.

Stephen Pheasant (1986), who taught anatomy, biomechanics and ergonomics at the Royal Free Hospital and the University College, London, said that Far Eastern people have proportionately shorter lower limbs than Europeans and black Africans. Pheasant said that the proportionately short lower limbs of Far Eastern people is a difference that is most characterized in Japanese people, less characterized in Korean and Chinese people, and the least characterized in Vietnamese and Thai people. [26] [27]

In a craniometric study, Pietrusewsky (1994) found that the Japanese series, which was a series that spanned from the Yayoi period to modern times, formed a single branch with Korea. [29] Later, Pietrusewsky (1999) found, however, that Korean and Yayoi people were very highly separated in the East Asian cluster, indicating that the connection that Japanese have with Korea would not have derived from Yayoi people. [29]

Koreans display high frequencies of the Y-DNA Haplogroup O-M176. [31] Genetic studies also found that, just like other East Asians, Koreans are almost very similar to their ancestors, the proto-koreans. [32] Although few people claim that Koreans descended from several groups, a recent study show that Koreans possess a dual ancestry. The study says that Koreans have two genetic components; one from East Asia and one from East Asia or Northeast Asia. [33] And Koreans weren't that homogenous at first, according to the study. They have had small amounts of admixture with ethnic groups like the Han Chinese, Yakuts, and Manchu.

Studies of polymorphisms in the human Y-chromosome have so far produced evidence to suggest that the Korean people have a long history as a distinct, mostly endogamous ethnic group, with successive waves of people moving to the peninsula and two major Y-chromosome haplogroups. [34] Koreans also show a close genetic relationship with other modern East Asians such as the Han Chinese and Japanese [35] and with Neolithic specimens recovered from Chertovy Vorota Cave in Primorsky Krai. [10] The reference population for Koreans used in Geno 2.0 Next Generation is 94% Eastern Asia and 5% Southeast Asia & Oceania. [36]

Korea Foundation Associate Professor of History, Eugene Y. Park said that many Koreans seem to have a genealogical memory blackout before the twentieth century. [37] [38] According to him the vast majority Koreans do not know their actual genealogical history. Through "inventing tradition" in the seventeenth and eighteenth centuries, families devised a kind of master narrative story that purports to explain a surname-ancestral seat combination's history to the extent where it is next to impossible to look beyond these master narrative stories. [39] He gave an example of what "inventing tradition" was like from his own family's genealogy where a document from 1873 recorded three children in a particular family and a later 1920 document recorded an extra son in that same family. [40] Park said that these master narratives connect the same surname and ancestral seat to a single, common ancestor. This trend became universal in the nineteenth century, but genealogies which were published in the seventeenth century actually admit that they did not know how the different lines of the same surname or ancestral seat are related at all. [41] Only a small percentage of Koreans had surnames and ancestral seats to begin with, and that the rest of the Korean population had adopted these surname and ancestral seat identities within the last two to three hundred years. [42]

North Korea and South Korea share a common heritage, but the political division since 1945 has resulted in some divergence of their modern cultures.[ citation needed] 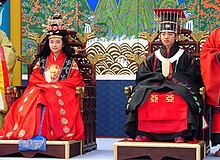 Large-scale emigration from Korea began as early as the mid-1860s, mainly into the Russian Far East and Northeast China or what was historically known as Manchuria; these populations would later grow to more than two million Koreans in China and several hundred thousand Koryo-saram (ethnic Koreans in Central Asia and the former USSR). [44] [45] During the Korea under Japanese rule of 1910–1945, Koreans were often recruited and or forced into labour service to work in mainland Japan, Karafuto Prefecture ( Sakhalin), and Manchukuo; the ones who chose to remain in Japan at the end of the war became known as Zainichi Koreans, while the roughly 40 thousand who were trapped in Karafuto after the Soviet invasion are typically referred to as Sakhalin Koreans. [46] [47] 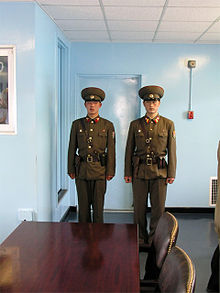 Estimating the size, growth rate, sex ratio, and age structure of North Korea's population has been extremely difficult. Until release of official data in 1989, the 1963 edition of the North Korea Central Yearbook was the last official publication to disclose population figures. After 1963 demographers used varying methods to estimate the population. They either totalled the number of delegates elected to the Supreme People's Assembly (each delegate representing 50,000 people before 1962 and 30,000 people afterwards) or relied on official statements that a certain number of persons, or percentage of the population, was engaged in a particular activity. Thus, on the basis of remarks made by President Kim Il-sung in 1977 concerning school attendance, the population that year was calculated at 17.2 million persons. During the 1980s, health statistics, including life expectancy and causes of mortality, were gradually made available to the outside world. [54]

In 1989, the Central Bureau of Statistics released demographic data to the United Nations Population Fund in order to secure the UNFPA's assistance in holding North Korea's first nationwide census since the establishment of the state in 1948. Although the figures given to the United Nations might have been distorted, it appears that in line with other attempts to open itself to the outside world, the North Korean regime has also opened somewhat in the demographic realm. Although the country lacks trained demographers, accurate data on household registration, migration, and births and deaths are available to North Korean authorities. According to the United States scholar Nicholas Eberstadt and demographer Brian Ko, vital statistics and personal information on residents are kept by agencies on the ri ("village", the local administrative unit) level in rural areas and the dong ("district" or "block") level in urban areas. [54]

Korean emigration to the U.S. was known to have begun as early as 1903, but the Korean American community did not grow to a significant size until after the passage of the Immigration and Nationality Act of 1965; as of 2017, excluding the undocumented and uncounted, roughly 1.85 million Koreans emigrants and people of Korean descent live in the United States according to the official figure by the US Census. [55]

The Greater Los Angeles Area and New York metropolitan area in the United States contain the largest populations of ethnic Koreans outside of Korea or China. Significant Korean populations are present in China, Japan, Argentina, Brazil and Canada as well. During the 1990s and 2000s, the number of Koreans in the Philippines and Koreans in Vietnam have also grown significantly. [56] [57] Koreans in the United Kingdom now form Western Europe's largest Korean community, albeit still relatively small; Koreans in Germany used to outnumber those in the UK until the late 1990s. In Australia, Korean Australians comprise a modest minority. Koreans have migrated significantly since the 1960s. Now they form an integral part in society especially in Business, Education and Cultural areas.[ citation needed]

The Korean population in the United States represents a small share of the American economy, but has a disproportionately positive impact. Korean Americans have a savings rate double that of the U.S. average and also graduate from college at a rate double that of the U.S. average, providing highly skilled and educated professionals to the American workforce. According to the U.S. Census Bureau's Census 2000 data, mean household earnings for ethnic Koreans in the U.S. was $59,981, approximately 5.1% higher than the U.S. average at the time of $56,604. [58]