Jamaica Bay Wildlife Refuge is a wildlife refuge in New York City managed by the National Park Service as part of Gateway National Recreation Area. It is composed of the open water and intertidal salt marshes of Jamaica Bay. It lies entirely within the boundaries of New York City, divided between the boroughs of Brooklyn to the west and Queens to the east.

Bird watching has always been a popular activity at the Jamaica Bay Wildlife Refuge, June 1973. Photo by Arthur Tress. 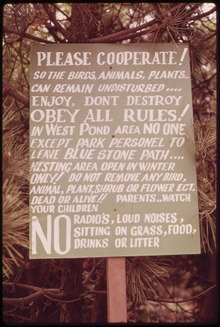 Jamaica Bay Wildlife Refuge consists of several islands in Jamaica Bay, located in both Brooklyn and Queens. The Queens portion is located near John F. Kennedy International Airport, which was built upon a portion of the wetlands in Jamaica Bay. In April 1942, the City of New York started placing hydraulic fill over the marshy tidelands of the area. [1] JFK International Airport is now the sixth busiest airport in the United States, [2] and the aviation traffic may pose some serious noise pollutant threats to the surrounding environment. [3]

The refuge provides habitat for a wide variety of flora and fauna, both marine and terrestrial. It is a prime location for viewing birds and bird migrations, diamondback terrapin egg-laying and horseshoe crab mating and egg laying. The primary diet of the diamondback terrapins include fish, snails, worms, clams, crabs and marsh plants, many of which are abundant in these particular marshlands. [4] Ospreys are currently being captured, tagged and studied in the Wildlife Refuge to help scientists better understand the birds' habits. [5] Small mammals such as eastern gray squirrels [6] and raccoon [7] are also present in the area. The recently increased raccoon population, however, has developed a taste for diamondback terrapin eggs, and many nests are often destroyed only 24 hours after being laid. [8]

The extent of the refuge is mostly open water, but includes upland shoreline and islands with salt marsh, dunes, brackish ponds, woodland and fields. It is the only "wildlife refuge" in the National Park System. Originally created and managed by New York City as a wildlife refuge, the term was retained by Gateway when the site was transferred in 1972. Usually, federal wildlife refuges are managed by the U.S. Fish and Wildlife Service. Features created under city ownership include two large freshwater ponds. A visitor center with a parking lot provides free permits to walk the trails. [9] The two main trails go around the East Pond and the West Pond. The West Pond and its trail, however, were breached by Hurricane Sandy in 2012.