From Wikipedia, the free encyclopedia
Folly in Central Park in Manhattan, New York City
Not to be confused with Schloss Belvedere, Belvédère Castle, or Belvedere House and Gardens. 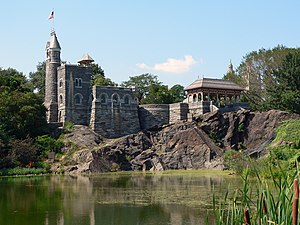 Belvedere Castle in September 2005
Map of notable buildings and structures at Central Park. Pan and zoom the map and click on points for more details.
This map:

Belvedere Castle is a folly in Central Park in Manhattan, New York City. It contains exhibit rooms and an observation deck, and since 1919, has also housed the official Central Park weather station.

Belvedere Castle was designed by Frederick Law Olmsted and Calvert Vaux in 1867–1869. An architectural hybrid of Gothic and Romanesque styles, Vaux's design called for a Manhattan schist and granite structure with a corner tower with conical cap, with the existing lookout over parapet walls between them. [1] Its name comes from belvedere, which means "beautiful view" in Italian. [2]:162 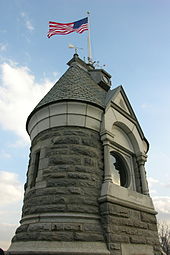 The tower in February 2005; note the anemometer and wind vane on the top; these instruments record the official wind speed and direction for Central Park

Belvedere Castle was originally built as a shell with open doorway and window openings. [2]:162 The main tower was given a more medieval design, with a weather antenna on top, but during the castle's 1983 renovation, the tower was restored to a German style with a flag, a weather vane, and an anemometer on top. The two fanciful wooden pavilions deteriorated without painting and upkeep and were removed before 1900. [3]

Starting in 1919, Belvedere Castle housed the New York Meteorological Observatory, which had been taken over by the [National Weather Service|United States Weather Bureau]. The current weather station in Central Park, an Automated Surface Observing System (ASOS), is located immediately south of the castle, though wind equipment is still located on the main tower. [2]:162 [4]

The castle caps Vista Rock, a 130-foot-tall (40 m) outcropping of schist and the park's second-highest natural elevation. [5] [6] (Summit Rock, at 83rd Street overlooking Central Park West, is higher at 137.5 feet (41.9 m). [7]) Constructed of Manhattan schist quarried in the park and dressed with gray granite, it tops the natural-looking woodlands of The Ramble, as seen from the formal Bethesda Terrace. The natural rock was tunneled through for the innovative sunken transverse roadway that still carries commercial and other traffic unobtrusively through the park.

The castle serves now as a visitor center and gift shop. Free family and community programs hosted at Belvedere Castle include birding and other Central Park Conservancy discovery programs for families as well as a variety of history and natural history programs led by NYC Urban Park Rangers, including stargazing/astronomy and wildlife-education events.

The eastern elevation formerly faced a rectangular receiving reservoir that was part of the Croton Aqueduct system. The reservoir was filled in with city building rubble, beginning with spoil from construction of the New York City Subway's IND Eighth Avenue Line (now carrying the A, ​ B, ​ C, and ​ D trains) in the 1930s. Today, the eastern elevation overlooks the Great Lawn and Turtle Pond, which occupies the former site of the receiving reservoir.

Mould's bronze cockatrice, part of a transom over a doorway of the Castle in 2004

The castle was designed by the architects Calvert Vaux and Jacob Wrey Mould as an additional feature of the Greensward Plan, created by Vaux and Frederick Law Olmsted. Olmsted and Vaux were re-hired to their positions in mid-1865 after quitting abruptly several years before. [8] [9]:58–59 In 1867, Vaux decided to develop this area by building Belvedere Castle on the top of the rock, overlooking the Croton Reservoir. [10] [11] The site already held a fire tower under the control of the Croton Aqueduct board, and so the fire tower was demolished. [12]

The original plans for Belvedere Castle called for two turreted stone towers: a larger structure on the eastern elevation and a smaller structure on the west side. [9]:60 To reduce costs it was revised in November 1870 under the Tammany Hall regime, which had taken over construction by this time, and completed as an open painted-wood pavilion. [13] The eastern structure was completed by 1871, while the western structure was never built. [9]:60 As the plantings matured, the castle has been obscured from its original intended viewpoint. Its turret is the highest point in the park. [14]

After the New York Meteorological Observatory automated its equipment and moved its offices to Rockefeller Center in the 1960s, Belvedere Castle was closed to the public and became an object of much vandalism, neglect and deterioration. [15] [16] The Central Park Conservancy launched a restoration effort and reopened the structure on May 1, 1983. The original turret was replaced, the pavilions were rebuilt, and the castle was converted into a visitor center. [4] In 1995, the Conservancy's Historic Preservation Crew replaced the painted wooden loggia of the castle, working from Vaux's designs, on the granite piers and walls that had survived. The same year, a $340,000 grant was distributed toward restoring the castle as the Henry Luce Nature Center. That restoration was completed in 1996. [17]

In 2018, the Central Park Conservancy conducted a second renovation of Belvedere Castle. Plans included replacing existing doors and windows with double paned glass. [4] In addition the Conservancy proposed to construct a new access path to ADA standards from the East Drive. [18] The access path − actually an elevated ramp with parapets − has been criticized as creating an unnecessary barrier in the otherwise naturalistic park. [19] Following the $12 million renovation, the castle reopened on June 28, 2019. [20] [21] [22]

The first season episode of The Naked City titled 'Belvedere Tower', first screened on November 18, 1958, featured location filming at the castle where a killer takes refuge, holding a weather official hostage, and is taken into custody after a shootout with police.

In the 1970s, its facade was used for exterior shots of the castle where Count von Count lived on the children's television series Sesame Street.

Soon after its 1983 restoration, the building was used as a filming location for Merchant Ivory's 1984 film The Bostonians, starring Christopher Reeve and Vanessa Redgrave.

The castle is depicted in animated form twice in season 2 of the American animated series Gargoyles. First in the episode "High Noon" where it is chosen as the location of the episode's climax and later in the episode "Avalon" when it's the site of a reunion.

It is also featured in the 1998 film Stepmom, as a photography location for Julia Roberts' character.

The castle was also used in the 2011 film The Smurfs where it served as both the hiding place of the evil sorcerer Gargamel and the location of the film's final battle.

In the "DeathSpeaker Codex" series by Sonya Bateman, the castle is prominent in many of the books as a place where the protagonist, Gideon, goes back to time and time again for various paranormal reasons.

It was featured in the 2018 PlayStation 4 game Spider-Man.