The Ironman World Championship has been held annually in Hawaii since 1978, with an additional race in 1982. It is owned and organized by the World Triathlon Corporation. It is the annual culmination of a series of Ironman triathlon qualification races held throughout the world. 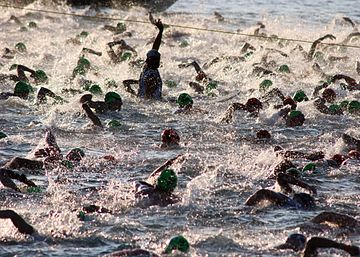 From 1978 through 1980 the race was held on the island of Oahu, the course combining that of three events already held there: the Waikiki Roughwater Swim (2.4 mi./3.86 km), the Around-Oahu Bike Race (115 mi./185.07 km, originally a two-day event), and the Honolulu Marathon. The bike stage was reduced by 3 miles to link it to the start of the marathon course. In 1981 the race was moved to the less urbanized Big Island, keeping the distances the same: a 2.4 miles (3.86 km) open water swim in Kailua-Kona Bay, a 112 miles (180.25 km) bike ride across the Hawaiian lava desert to Hāwī and back, and a marathon (26 miles 385 yards, 42.195 km) run along the coast of the Big Island from Keauhou to Keahole Point and back to Kailua-Kona, finishing on Aliʻi Drive.

Since 1982, the race has been held in the fall each year, before which it was held in the spring, giving two races in 1982. The most recent Ironman World Championship took place on 12 October 2019. Qualifying for the World Championship is achieved through placement in one of the other Ironman races or some Ironman 70.3 races. For the 2017 event there were 40 qualifying Ironman races and 4 at the 70.3 distance. [1]

Until 2015, individuals could enter a lottery for the chance to participate in the Ironman World Championship. The lottery entry fee was $50 and afforded the chance to win one of 100 berths in the championship race. If selected the winners then had to pay the normal entry fee. [14]

However, according to a sworn complaint filed with the U.S. District Court in Tampa, Florida, Ironman illegally charged athletes for a chance to win the opportunity to compete in the Ironman World Championship. [15] [16] According to Florida law, the state where the World Triathlon Corporation resides, it is illegal to set up and charge for a lottery. [17] Because WTC charged a $50 fee to enter the lottery, instead of giving away the opportunity to win a slot at the championships, they were in violation of this law. [18] Following the complaint WTC cooperated with the United States Attorneys office and the FBI's investigation of the matter and agreed to forfeit $2,761,910, the amount collected from the lottery since 24 October 2012. [15] [19] The attorney representing the United States in the matter was 8-time Ironman finisher James A. Muench. [20]

Winners of the 2015 lottery were notified on 17 March 2015, prior to the announcement of the complaint. [16] WTC stated that these winners would be unaffected by this decision and that their slots for the upcoming championship race would be honored. [21]