Interstate 515 (I-515) is a 14.444-mile-long (23.245 km) spur route of Interstate 15 in Nevada that runs from the junction of I-11, I-215 and SR 564 (the Henderson Spaghetti Bowl Interchange) in Henderson to the junction of I-15, US 93 and US 95 (the Las Vegas Spaghetti Bowl Interchange) in Downtown Las Vegas. The freeway connects traffic headed from Boulder City and Henderson to Downtown Las Vegas via a direct, high-speed route and is concurrent with both US 93 and US 95 along its entire length.

The I-515 designation was first approved in 1976, but construction did not begin until 1982, and was constructed in stages until it reached its former terminus north of Railroad Pass in 1994, when signs of the designation finally were put up. I-515 was built to bypass Fremont Street and Boulder Highway, both of which were former alignments of US 93, US 95 and US 466 and provide a direct freeway connection with Henderson.

Northbound view approaching northern terminus of I-515 in 2015

I-515 begins in Henderson as a continuation of I-11 at the Henderson Spaghetti Bowl Interchange with I-11/I-215/SR 564, concurrent with US Routes 93 and 95. Continuing northwest, the highway passes through the southeastern areas of the Las Vegas Valley. After intersecting Charleston Boulevard, the freeway turns west and runs just north of downtown Las Vegas before ending at the Spaghetti Bowl Interchange with I-15/US 93/US 95.

Prior to the completion of the freeway, US 93 and US 95 originally followed Fremont Street / Boulder Highway from Downtown Las Vegas southeast through Henderson towards to Boulder City. Boulder Highway was signed as a business route of US 93/95 after the freeway was completed, but that designation has since been removed; it is now just State Route 582.[ citation needed]

The I-515 freeway, which began construction in 1982, is a continuation of the Oran K. Gragson Freeway (named for the former Las Vegas mayor who advocated for the construction of the then Las Vegas Expressway) which ran primarily along the former West Fremont Street alignment between Las Vegas Boulevard and Rainbow Boulevard.[ citation needed] The spur was completed southeast to Charleston Boulevard ( SR 159) in 1984, to Tropicana Avenue ( SR 593) in 1986, to Russell Road in 1988, to Lake Mead Parkway ( SR 564) (then known as Lake Mead Drive, SR 146 west and SR 147 east), in 1990, and finally to Railroad Pass just south of Boulder Highway in 1994 at an at-grade intersection with Paradise Hills Drive (which was eventually removed.)[ citation needed] With the final extension of highway complete, the length of I-515 was 20.010 miles (32.203 km). [2]

The I-515 designation was first approved by the American Association of State Highway and Transportation Officials (AASHTO) on July 12, 1976, from the I-15 interchange to the junction of US 93 and US 95 (at Boulder Highway, current exit 70). [3] On December 7, 1984, AASHTO approved the southeasterly extension of the route to its former terminus near Boulder City. [4] Even though the route number was approved prior to the highway's construction, I-515 was not consistently signed until after the freeway was completed down to its former southern terminus north of Railroad Pass in 1994.[ citation needed] 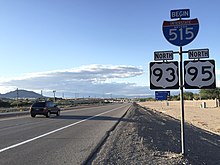 Beginning of northbound I-515 as seen in 2015, at former southern terminus in the southern city limits of Henderson.

With the pending construction of the Boulder City Bypass introducing the I-11 designation to Nevada, the Nevada Department of Transportation (NDOT) sought to connect the new route to other interstate highways. NDOT submitted an application to AASHTO at their spring 2014 meeting to request the designation of "Future Interstate 11", which included routing I-11 along existing I-515 between Railroad Pass and the I-215 Henderson Spaghetti Bowl interchange—AASHTO approved this request on May 29, 2014, with condition that it also be approved by the Federal Highway Administration. [5] The Boulder City Bypass was completed in August 2018. NDOT began replacing I-515 signs along the southern stretch with I-11 signs on March 17, 2019. The signing continued through April 26, 2019. [6]

The designation of future Interstate 11 is planned to connect the Phoenix, Arizona, and Las Vegas metropolitan areas, with potential for future expansion northwest of Las Vegas to Reno in the northwestern part of the state. The current I-515 alignment, with a continuation northwest along US 95, is one of three corridors under consideration to carry the I-11 designation through the Las Vegas Valley. [7]

Exits on I-515 are numbered according to US 95 mileposts. The entire route is in Clark County.