From Wikipedia, the free encyclopedia
Law school in Atlanta, Georgia

The Georgia State University College of Law is a law school located in downtown Atlanta, Georgia. Founded in 1982, it is accredited by the American Bar Association and is a member of the Association of American Law Schools. 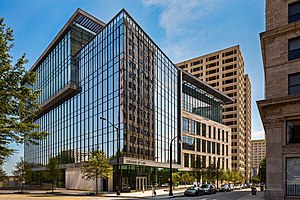 In addition to the Juris Doctor degree, the college offers joint degree programs with other colleges at Georgia State University.

As far back as the early 1970s, Georgia legislators and academic leaders debated establishing a new law school. The Georgia State University College of Law finally was sanctioned by the state’s Board of Regents in 1981 and Ben F. Johnson became its first dean. [5]

The college enrolled 200 students in its inaugural year, taught by six professors. Most students were part-time, and many took classes at night, because they had full-time jobs during the day. The college’s first seven graduates were hooded in December 1984.

By the end of its first decade, full-time faculty had grown to 31, nearly half of whom were women.

Georgia State University College of Law is currently ranked as the 67th best law school by U.S. News & World Report (2019). [4] The College of Law also boasts a strong Health Law program (currently ranked 2nd nationally) and a large part-time program (ranked 13th nationally). [4] The school is ranked 42nd by Above The Law using metrics that focus more on student outcomes rather than inputs. [6] Additionally, GSU was named by Princeton Review in its 2013 edition of The Best 168 Law Schools. [7]

The school has a number of legal clinics, such as the Phillip C. Cook Low-Income Taxpayer Clinic, which serves low-income taxpayers. [9]

The school operates the Summer Academy in International Commercial Arbitration, a five-week, six-credit hour study abroad program based in Linz, Austria. [10] the Buenos Aires Summer Program in Argentina (jointly sponsored with the Florida International University College of Law); and the Summer Legal and Policy Study in Rio de Janeiro, Brazil. [11]

According to Georgia State's official 2018 ABA-required disclosures, 71.5% of the Class of 2018 obtained full-time, long-term, JD-required employment nine months after graduation. [12] Georgia State's Law School Transparency under-employment score is 13.4%, indicating the percentage of the Class of 2018 unemployed, pursuing an additional degree, or working in a non-professional, short-term, or part-time job nine months after graduation. [13]