University of Georgia School of Law

The law school was founded in 1859. The founding three professors of the university’s new law school included one of the United State’s first state supreme court chief justices, Joseph Lumpkin, a Princeton alumnus. [6] Joining him was attorney Thomas Cobb, who was the author of first enacted comprehensive codification of common law in the United States. [7] The third original law professor was William Hull, an honors graduate of the University of Georgia, who had been a United States Attorney and a Solicitor General of the United States. [8] Previously, law courses had been offered as part of the undergraduate curriculum of Franklin College of the university. The first classes of the Lumpkin Law School, as it was originally designated, were held at the law offices of Lumpkin and Cobb at the corner of Prince Avenue and Pulaski Street until 1873. [9]

By 1880, the curriculum included courses in equity, parliamentary law, and various commercial law studies such as partnership, insurance, tax, and tariffs. Around 1889, stricter admission standards mandated that students be at least 18 years old. Two years later, an entrance exam had been instituted. The modern method of case law instruction was ushered in during the 1920s. In December 1931, the school was granted membership in the Association of American Law Schools. After being housed in various buildings over the years, the law school in 1932 moved into the new Hirsch Hall, named in honor of prominent Coca-Cola attorney Harold Hirsch, located on historic North Campus at the University of Georgia. [10]

Hirsch Hall, expanded by many thousands of square feet over the years in connected buildings and upgrades, remains the site of law school classrooms and offices, as well as the Alexander Campbell King Law Library and the Hatton Lovejoy Courtroom. [11] [12] A 2012 renovation created almost 4,000 square feet of additional space, including a cafe and enclosed three story courtyard. [12]

More than 300 courses, clinics, and seminars are offered at Georgia Law, including business-related law, property-related law, personal rights and public interest law, trial and appellate practice, as well as global practice preparation. [17] Degrees awarded include the Juris Doctor (J.D.), the Master of Laws (LL.M.) for foreign-trained lawyers, [18] and the Master in the Study of Law (M.S.L.) for those who wish to gain an understanding of legal principles and perspectives in order to advance their careers. [19] Students also may choose to pursue interdisciplinary coursework in other University schools and colleges, or to earn one of many dual degrees including a J.D./M.B.A. or LL.M./M.B.A. [20] [21]

Admission to the school is highly competitive, Georgia Law accepting 26.8% of applicants for the Class of 2021, with a median LSAT of 165 and a median GPA of 3.83. [25] [26] Georgia Law's selectivity rating is 95 out of a possible maximum of 99, Georgia Law enrolled students being in the top 4% of law school applicants. [27] Although grades, degrees earned, and standardized test scores are important, for each applicant the admissions committee primarily considers a mandatory personal admission essay, a mandatory resume detailing the applicant's education, employment, fellowships, skills, honors, awards, community involvement, volunteer work, and other accomplishments, as well as mandatory letters of recommendation. [28]

The 2019 first year students came from 25 states, 14 countries, and 97 undergraduate institutions. Nearly 70% of those students received merit based scholarships. [29]

Georgia Law's Mentorship Program matches every law student with a faculty member mentor, an upperclassman peer mentor, a Career Development Office counselor, and an alumnus professional mentor. [30] There are just six students for each faculty member. [31] [32]

Georgia Law students publish three legal journals: Georgia Law Review, Journal of Intellectual Property Law, and Georgia Journal of International and Comparative Law. These journals have frequently been cited by federal and state courts, as well as textbooks and law reviews. [33] Membership on the journals is limited to students in their second and third years of law school. [33] In addition to the Georgia Law Review, students publish the online component, the Georgia Law Review Posts, which features essays by students, practitioners, judges and professors focused primarily on timely legal issues in the U.S. Supreme Court and U.S. Courts of Appeals. [34]

The Alexander Campbell King Law Library is the oldest and largest law library in the state of Georgia. In 1967, U.S. Supreme Court Justice Hugo Black gave the keynote address at an outdoor ceremony to dedicate a modern law library building adjacent to Hirsch Hall. [35] Housing a collection of more than 500,000 digital and print titles, the law library is a founding member of the Legal Information Preservation Alliance and the Law Library Microform Consortium. It has been designated a Federal Depository Library. [36] The library is also one of the United States' Specialized European Documentation Centres, houses the Faculty Writings Collection, the Phillips Nuremberg Trials Collection, the Rare Book Collection, and the J. Alton Hosch Collection, which includes the extensive personal library of Dean Hosch, a member of the law school faculty from 1935 to 1964.

Tuition for one year at Georgia Law is $17,430 for Georgia residents and $35,868 for non-residents. The total cost of attendance (including the cost of tuition, fees and off-campus living expenses) for the 2018-19 academic year is estimated to be $37,558 for Georgia residents and $56,496 for non-residents. [51] Non-resident students are able to obtain Georgia residency at the beginning of their second year of law school, and available are tuition reduction scholarships that allow non-residents to pay resident tuition for one or two semesters of the first year of Georgia Law. [52] Further, nearly 70% of the members of the Class of 2021 received merit based scholarships funded by donors. [29] U.S. News & World Report ranked Georgia Law as a top ten law school in having the 4th best salary to debt ratio. [53] 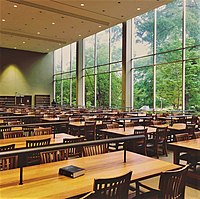 Living Georgia Law graduates work in all 50 states and more than 60 countries. [54] According to the School of Law's official 2019 ABA-required disclosures, not including those choosing to open their own practices, to pursue additional education, etc., within nine months 93.8% of the 2018 graduating class were hired to perform high-value jobs within nine months after graduation, and 91.8% held full-time, long-term, JD-advantage positions at that point (Georgia Law being in the top 14 law schools for high-value jobs out of 204 ABA-approved schools). [55] [56] [57] [58] Of 179 students who graduated in 2018 - not including those who opened their own practices, pursued additional education, etc. - 56 went to law firms with up to 50 attorneys, 36 to law firms with 51 to over 500 attorneys, 15 to business organizations, 32 to government and public interest organizations (not including judicial clerkships that 38 graduates obtained) and one to academia. [58]

Serving as a judicial clerk is considered one of the most prestigious positions in legal circles, and often opens up wide-ranging opportunities in private practice, high-ranking government work, and academia. [59] Georgia Law has had six alumni serve as judicial clerks for justices of the U.S. Supreme Court since 2005. Based on the 2005-2018 graduating classes, the School of Law was ranked 14th among the nation's law schools for sending its graduates to clerk for the U.S. Supreme Court. [60] For the class of 2018, Georgia Law placed 38 graduates in federal and state court clerkships (a top 13 placement rate of all ABA-approved law schools in the nation for federal court clerkships). [61]

For the 2019 Top 50 Law School Rankings, of the 204 ABA-approved law schools, Georgia Law was ranked #19. However, according to the study by Law School Transparency, Georgia Law ranked in the top ten nationally for employment outcomes, while The New York Times recognized Georgia law as being in the top five law schools offering the best salary-to-debt ratios in the nation. [62] [63] [64] [65] Furthermore, the law school has been ranked #13 of the top best law schools by the National Jurist. [66] U.S. News & World Report's 2021 ranking of #31 places Georgia Law in the top tier of all ABA-approved law schools, with the school additionally individually ranked in Trial Advocacy, Business/Corporate Law, Clinical Training, Constitutional Law, Contracts/Commercial Law, Dispute Resolution, Environmental Law, Intellectual Property Law, International Law, Healthcare Law, Legal Writing, and Tax Law. [67] Finally, based on outcome-driven factors such as average indebtedness, bar passage, and employment, Georgia Law has been ranked #1 as the best value in legal education in the United States by the National Jurist. [68]