First Hawaiian Center is the tallest building in the U.S. state of Hawaiʻi and the city of Honolulu, the largest city in the state. [2] It is the world corporate headquarters of First Hawaiian Bank, the oldest and largest bank based in Hawaiʻi. The tower is one of the most well-known buildings in Honolulu, with a striking presence at the center of downtown Honolulu's skyline. 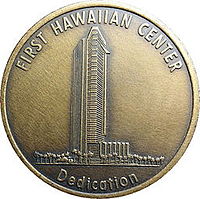 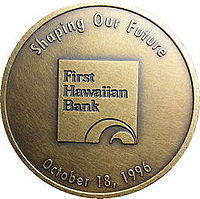 First Hawaiian Center features the 24,000 square feet (2,200 m²) of open plaza, park space and waterways in the middle of downtown Honolulu's financial district cityscape of towering commercial buildings and congested streets. It is within walking distance of the Aliʻiōlani Hale, Cathedral of Our Lady of Peace, Hawaiʻi State Capitol and ʻIolani Palace. Considered a "unique marriage of commerce and the arts,"[ citation needed] First Hawaiian Center features three floors devoted to the Honolulu Museum of Art Spalding House (formerly known as The Contemporary Museum, Honolulu) for an art gallery of local Hawaiian works. [3]

The First Hawaiian Center is home to the Innovation Center Pacific. [4]

First Hawaiian Center was completed and opened in 1996 by Chairman and Chief Executive Officer of First Hawaiian Bank Walter A. Dods, Jr. With over 645,834 square feet (60,000 m²) of space and a height of 429 feet (131 m), the building cost over USD $175 million to construct. The architects were from the firm Kohn Pedersen Fox Associates.[ citation needed]

First Hawaiian Center planning was met with controversy as Hawaiʻi residents became concerned about the effect skyscrapers would have on the Hawaiian landscape. Architects compromised with the use of Hawaiian architectural principles used in most contemporary Honolulu urban projects like those employed by architects of the Hawaiʻi Convention Center. Metaphoric designs were used in reference to natural phenomena found in Hawaiʻi.[ citation needed]

Two distinct architectural forms resulted in the compromise, one for the makai side facing the ocean and one for the mauka side facing the mountains. Horizontally louvered windows framed views of the sea and the horizon while vertically proportioned windows faced the mountains. A great deal of effort was made to incorporate as much natural light as possible into the building interiors.[ citation needed]