From Wikipedia, the free encyclopedia
(Redirected from Deer Valley Airport)

In the 1950s, the Sperry Flight Systems Company established an aerospace/defense manufacturing facility on land north of Phoenix's city limits in what was mostly undeveloped desert. While the plant was under construction, roughly 480 acres to the north nearby was also leased as the potential site for a new flight testing facility. Later on this land was developed into a private airport and then sold, in 1971, to the City of Phoenix. A number of flight research and general aviation firms soon made the new airport their base of operations. [6] Federal Aviation Administration funding enabled upgrades to the terminal building, flight control tower, runways, and many other facilities and safety features.

There is no scheduled airline service, but charter service is available through several companies.

Phoenix Deer Valley Airport has hosted various air shows of vintage World War II aircraft. Among the events which have taken place is "Wings of Freedom". 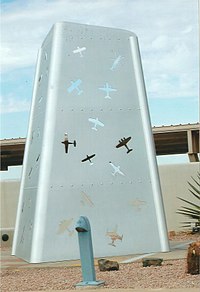