Dean E. Preston is an American civil rights attorney, tenant rights activist, and member of the San Francisco Board of Supervisors. He is known for having founded Tenants Together, a California tenant advocacy organization. In November 2019, Preston won a special election to finish Mayor London Breed's term on the San Francisco Board of Supervisors, defeating incumbent Vallie Brown to represent District 5. In November 2020, a regular election will be held for supervisor in District 5.

Preston was born in New York City. [2] His parents were refugees from Nazi Germany during World War II. [3] Their family lived in a co-operative apartment in Greenwich Village. [2]

Preston attended Bowdoin College, where he met his wife Jenckyn Goosby. [3] He graduated in 1991 with a major in anthropology and economics. [4] After graduation, the couple moved to Jenckyn's native San Francisco, settling down near Alamo Square. [1] [3] Preston studied law at UC Hastings College of the Law, receiving his J.D. in 1996. [4]

He was a co-owner of the bar and nightclub Cafe du Nord in the Castro District of San Francisco. [3]

After earning his law degree, Preston worked on police brutality cases at the firm of John Burris. He spent the late 1990s working at public interest firms. [2] Preston joined the non-profit Tenderloin Housing Clinic in 2000 and transitioned to tenant rights law.[ citation needed]

In 2008 Preston founded Tenants Together, a non-profit organization advocating for tenant rights in California. The organization campaigned against California's Proposition 98 that year. The ballot initiative would have abolished rent control across the state but was rejected by voters. [5]

Preston spearheaded a series of tenant bootcamps across San Francisco from 2015 to 2017, teaching renters how to protect their rights. [6] Tenants Together now supports a network of fifty tenant organizations throughout California with a hotline for renters, a network of tenant rights attorneys, and trainings for tenant organizers. [5] 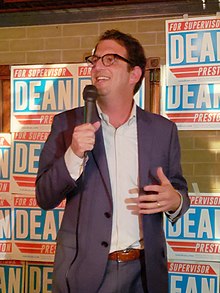 Preston at an election night campaign event in 2019

Preston ran against incumbent London Breed in the 2016 Board of Supervisors election for District 5 but lost 48% to 52%. [7]

He authored San Francisco's 2018 Proposition F, which directs the city to establish a universal right to counsel for tenants facing eviction. [8]

In July 2018, Preston, a member of the San Francisco chapter of the Democratic Socialists of America (DSA), [9] became a candidate for the 2019 District 5 Supervisor election, to fill the vacancy left when Breed became mayor. [10] Shortly after, Breed appointed Vallie Brown to the fill the position, and Brown ran as an incumbent. [11] Preston ran as a democratic socialist and won the election by a narrow margin, becoming the first democratic socialist elected to the board in forty years. [12] Preston was sworn in on December 16, 2019. [13]