Boyd Gaming Corporation is an American gaming and hospitality company based in Paradise, Nevada. The company continues to be run by founder Sam Boyd's family under the management of Sam's son, Bill Boyd (born 1931), who currently serves as the company's executive chairman after retiring as CEO in January 2008.

Boyd Gaming's history dates to 1941, when founder Sam Boyd first arrived in Las Vegas with his family. After being hired as a dealer, Sam Boyd worked his way up through the ranks of the Las Vegas casino industry, first to pit boss, then shift boss. He eventually saved enough to buy a small interest in the Sahara Hotel and Casino; later, Sam Boyd left the Sahara to become general manager and partner of The Mint Las Vegas.

Sam Boyd first partnered with his son Bill in 1962, when the two teamed up to acquire the Eldorado Casino in Henderson, Nevada. Bill, who was then a practicing attorney, acquired his first stake in the Eldorado by doing its legal work. Sam would go on to manage the Eldorado full-time after the Mint was sold in 1968. 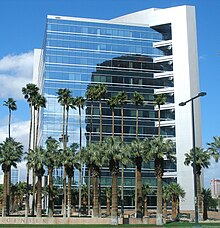 Although the Boyd family had been involved in the Las Vegas casino industry for decades, Boyd Gaming Corporation wasn't founded until January 1, 1975, when the company was formed to develop and operate the California Hotel and Casino in downtown Las Vegas. Then known as the Boyd Group, the company initially had 75 investors.

Boyd Gaming embarked on its first expansion in 1979, when it opened Sam's Town Hotel and Gambling Hall on Boulder Highway at Nellis Boulevard. Considered one of the first "locals" properties in Las Vegas, Sam's Town helped inaugurate the later development of Las Vegas' "Boulder Strip."

During these first two decades in operation, Sam and Bill Boyd developed a reputation for running a squeaky-clean operation. As a result, Nevada regulators turned to the Boyds for help following an investigation of skimming operations at the Stardust and Fremont casinos in the mid-1980s. The properties were notorious at the time for their extensive skimming operations; according to the FBI, anywhere from $7 million to $15 million in funds from the Stardust were diverted to organized crime figures between 1974 and 1976 alone. [3]

In 1984, after leveling a $3 million fine against the Stardust for skimming, the Nevada Gaming Commission asked to Boyds to run the property's gaming operations. When the Stardust was taken over by the reputable Boyd family, they were surprised by its huge profits, now that every penny of income was being recorded. Ex-FBI agent William F. Roemer Jr., longtime senior agent of the FBI's organized-crime squad in Chicago and an expert in Las Vegas doings, said, "The amount of skim had been so heavy that the profit and loss statement did not present a true picture of the gold mine that the Stardust was." [4] After several years of successful operations, Boyd Gaming officially acquired the Stardust and Fremont in 1985.

Company founder Sam Boyd died on January 15, 1993, at the age of 82, and was succeeded as Chief Executive Officer by Bill Boyd. In July of the same year, Boyd Gaming held its initial public offering of stock, debuting on the New York Stock Exchange under ticker symbol "BYD."

Funds from the IPO supplied Boyd Gaming with a source of capital for expansion, and the company embarked on a period of aggressive growth. The company acquired the Eldorado and Jokers Wild (which had previously been owned directly by the Boyd family) in 1993; later that year, Boyd Gaming acquired Main Street Station Hotel and Casino and Brewery.

Boyd Gaming's most ambitious expansion project came in 2003, when the company opened the $1.1 billion Borgata Hotel Casino in Atlantic City, N.J. A joint venture with MGM Resorts International, Borgata was the first new casino property to open in Atlantic City in 13 years, and quickly emerged as the market's leading property by gaming revenue. Borgata is by far Boyd Gaming's largest property, and currently supplies more than a third of the company's overall profits.

The Coast acquisition also included the yet-to-be completed South Coast, located five miles (8 km) south of the Strip on Las Vegas Boulevard. Boyd Gaming completed the project and opened its doors on December 22, 2005. Boyd Gaming operated the property for less than a year before selling it to former Coast CEO Michael Gaughan in 2006. (The property was rebranded to its current name, South Point, following the sale to Gaughan.)

In 2006, Boyd Gaming turned its focus to what would have been the largest project in its history: Echelon, a $4.8 billion resort complex at the site of the Stardust. In preparation for the project, Boyd Gaming swapped the Barbary Coast to Harrah's Entertainment in exchange for 24 acres near the Stardust, giving the company an 87-acre parcel on the north end of the Strip. The famed Stardust was closed on November 1, 2006, and imploded the night of March 13, 2007.

Construction on Echelon Place began on June 19, 2007 with plans to open in 2010, but was suspended a little over one year later, on August 1, 2008. At the time, Boyd Gaming officials cited "the difficult environment in today's capital markets, as well as weak economic conditions," and estimated construction would resume in three to four quarters. [5] As the global recession deepened, the suspension continued; in October 2009, the company said it would likely be three to five years before development resumed. [6] However, in March 2013, Boyd sold the Echelon site for $350 million to the Genting Group, a Malaysia-based gaming company to develop the site as Resorts World Las Vegas.

In 2007, Boyd purchased Dania Jai Alai, a fronton in Dania Beach, Florida. The company hoped to expand the facility with a casino, but efforts to allow new casinos in the Miami area made little headway. Boyd agreed in 2011 to sell the property to Dania Entertainment for $80 million, but the deal was not completed. The two companies reached a new sale agreement in February 2013 for $65.5 million. [7]

Boyd Gaming bought the IP Casino Resort & Spa in October 2011 for $278 million cash, plus a $10 million donation to the Engelstad Family Foundation. [8]

In November 2012, Boyd acquired Peninsula Gaming, an Iowa-based company with five casinos in the Midwest and South, for $1.45 billion. [9]

In July 2018, Boyd announced a partnership with MGM Resorts International "to significantly increase each company's market access and customer base throughout the United States." The partnership is focused on positioning both companies to succeed in the emerging online gambling and sports betting markets in the United States. [16]

In late 2018, Boyd completed two deals to increase its regional holdings. It acquired Valley Forge Casino Resort in Pennsylvania for $281 million. [17] [18] It also purchased the operations of four casinos from Pinnacle Entertainment for $564 million: Ameristar Kansas City, Ameristar St. Charles, Belterra Casino, and Belterra Park. [19] [20] The company paid another $58 million for the real estate of Belterra Park. [20] The sale was designed to ensure regulatory approval for Penn National Gaming's planned purchase of Pinnacle. [21]

Casinos in other states