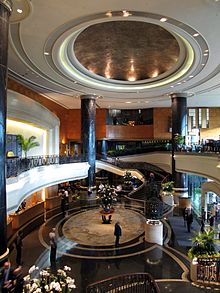 Hyatt Hotels Corporation, commonly known as Hyatt, is an American multinational hospitality company headquartered in the Riverside Plaza area of Chicago that manages and franchises luxury and business hotels, resorts, and vacation properties.

The Hyatt Corporation came into being upon purchase of the Hyatt House, at Los Angeles International Airport, on September 27, 1957. In 1969, Hyatt began expanding internationally. Hyatt has grown by developing new properties and through acquisitions, with the biggest growth coming from the acquisition of AmeriSuites (later rebranded Hyatt Place) in 2004, Summerfield Suites (later rebranded Hyatt House) in 2005, and Two Roads Hotels in 2018. [6] [7] [8] As of September 30, 2019, Hyatt has over 100,000 employees worldwide servicing nearly 900 properties across 20 brands in 60 countries. [9]

The first Hyatt House opened in 1954 by entrepreneurs Hyatt Robert von Dehn and Jack Dyer Crouch as a motel near Los Angeles International Airport. [10] In 1957, the hotel was purchased by entrepreneur Jay Pritzker for $2.2 million. His younger brother, Donald Pritzker, also took on an important role in the company. Considering the growing use of air travel for business, the Pritzker brothers realized that locating a high quality hotel near a major airport was a valuable business strategy. Within two years, they opened Hyatt House motels near San Francisco International Airport and Seattle–Tacoma International Airport. [11]

In 1967, the company opened their Regency Hyatt House in Atlanta, Georgia (today the Hyatt Regency Atlanta). The futuristic hotel was designed by Atlanta architect John Portman, who would go on to design many other hotels for the chain. It featured a massive indoor atrium, which soon became a distinctive feature of many Hyatt properties. [12]

In 1969, Hyatt opened its first hotel outside the United States, when it was awarded the management contract for the President Hotel in Hong Kong. The President Hotel was renamed the Hong Kong Hyatt Hotel (later known as the Hyatt Regency Hong Kong). [13]

In 1972, Hyatt formed Elsinore Corporation, a subsidiary to operate the Four Queens Hotel and Casino and the Hyatt Regency Lake Tahoe Resort, Spa & Casino. After Hyatt became a private company in 1979, Elsinore was spun off as a public company. The company opened the Playboy Hotel and Casino as a joint venture with Playboy Enterprises. [14] [15]

The Hyatt Regency brand is the oldest brand in the company, with the Grand Hyatt and Park Hyatt brands being introduced in 1980. Some of these are styled as "resort" properties, and may have spas or other recreational facilities. One of the first of these was the Hyatt Regency Maui in 1980. [17]

In August 2009, it was reported that Hyatt Hotels Corporation filed plans to raise up to $1.15 billion in an initial share sale. That November Hyatt completed an initial public offering and began trading publicly on the New York Stock Exchange under the symbol H. [22] According to the filing Mark S. Hoplamazian was to serve as CEO and Thomas Pritzker as Executive Chairman. [23] The public offering was a result of the acrimonious breakup of the Pritzker family empire. Accused of looting family trusts, Thomas and cousins Penny and Nicholas took control of the family businesses when they and other family members were sued by cousin Liesel Pritzker, claiming fraud and seeking damages of over US$6 billion. [24]

On September 1, 2011, Hyatt acquired Hotel Sierra, which had 18 properties in 10 states. Along with Hyatt Summerfield Suites hotels, several of these properties were rebranded as Hyatt house in January 2012. [25] 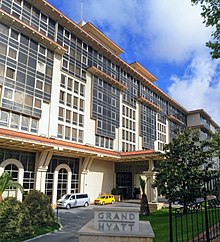 The Grand Hyatt Hotel in Istanbul

On October 28, 2015, Hyatt announced that they were in advanced talks to acquire Starwood Hotels in a cash and stock transaction. The transaction was not completed, and Starwood was acquired by Marriott International instead. [28]

In 2018, Hyatt saw expansion with the acquisition of Two Roads Hotels. This added the Joie de Vivre, Destination, Alila, and Thompson hotel brands to the Hyatt portfolio - a growth of 85 hotels in 23 markets. [30]

On December 6, 2018, Hyatt signed a contract with Kastrati Group to manage MAK Albania Hotel (former Sheraton Tirana) in Tirana, Albania. The hotel will be branded as Hyatt Regency and Residences Tirana. [31] 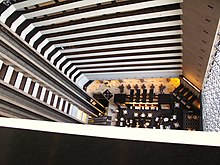 Hyatt-branded properties have traditionally catered to upscale or business customers; its properties were either full-service or boutique hotels. In 1980, Hyatt added the Grand Hyatt and Park Hyatt brands to its portfolio. In 1995, Hyatt entered the vacation ownership market. Hyatt introduced the Hyatt Place brand, designed as a limited service offering for business travelers, in 2006. Hyatt House was Hyatt's first select-service property, catering primarily to travelers with long-term stays and at a more economical price point. Since then, Hyatt has added a wide range of other brands, especially in the lifestyle and resort segments. [6]

Hyatt's partnership with MGM Resorts International allows members who join both companies' loyalty programs - World of Hyatt and Mlife, respectively - to "status match" (i.e., match their lower status in one of the programs to the higher tier achieved in the other), and then earn points and credits, as well as avail themselves of the perqs and partnerships associated with the higher, matched status in both programs. [40] [41] [42] [43]

In 2018, Hyatt also began partnering with select properties in the SLH (Small Luxury Hotels of the World) chain, which allows World of Hyatt members to earn and redeem points during their stays at participating SLH properties. [44]

In October 2018, Hyatt announced their purchase of Two Roads Hospitality, a lifestyle hotel management company, for a base purchase price of $480 million. Hyatt will take the management controls of 85 properties of Two Road's across eight countries. All the hotels have joined the World of Hyatt loyalty programme in 2019. [8]