From Wikipedia, the free encyclopedia
(Redirected from Bloomberg L.P)
Financial, software, data, and media company based in New York City

Bloomberg L.P. is a privately held financial, software, data, and media company headquartered in Midtown Manhattan, New York City. It was founded by Michael Bloomberg in 1981, with the help of Thomas Secunda, Duncan MacMillan, Charles Zegar, [7] and a 12% ownership investment by Merrill Lynch. [8] 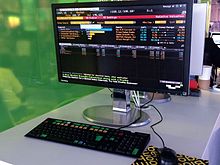 In 1981, Salomon Brothers was acquired, and Michael Bloomberg, a general partner, was given a $10 million partnership settlement. [12] Bloomberg, having designed in-house computerized financial systems for Salomon, [13] used his $10 million partnership buyout to start Innovative Market Systems (IMS). [14] [13] Bloomberg developed and built his own computerized system to provide real-time market data, financial calculations and other financial analytics to Wall Street firms. The Market Master terminal, later called the Bloomberg Terminal, was released to market in December 1982. [2] Merrill Lynch became the first customer, purchasing 20 terminals and a 30% equity stake in the company for $30 million in exchange for a five-year restriction on marketing the terminal to Merrill Lynch's competitors. [13] Merrill Lynch released IMS from this restriction in 1984. [13]

In 1986, the company renamed itself Bloomberg L.P. ( limited partnership). [15] Within a few years, Bloomberg launched ancillary products including Bloomberg Tradebook (a trading platform) and the Bloomberg Messaging Service. Bloomberg launched Bloomberg Business News, later Bloomberg News, in 1990, with Matthew Winkler as editor-in-chief. [16] Bloomberg.com was first established on September 29, 1993, as a financial portal with information on markets, currency conversion, news and events, and Bloomberg Terminal subscriptions. [17]

Bloomberg L.P. has remained a private company since its founding; the majority of which is owned by billionaire Michael Bloomberg. [21] To run for the position of Mayor of New York against Democrat Mark Green in 2001, Bloomberg gave up his position of CEO and appointed Lex Fenwick as CEO in his stead. [23] in 2012, Peter Grauer became the chairman of the company, a role he still holds. [24] In 2008, Fenwick became the CEO of Bloomberg Ventures, a new venture capital division and Daniel Doctoroff, former deputy mayor in the Bloomberg administration, was named president and CEO, serving until September 2014. [25] [26] At that point, it was announced that Michael Bloomberg would be taking the reins of his eponymous market data company from Doctoroff, who was chief executive of Bloomberg for the past six years after his term as deputy mayor. [27]

In June 2019, Bloomberg extended its parental leave policy for primary caregivers from 18 to 26 weeks. [28]

Since its founding, Bloomberg L.P. has made several acquisitions including the radio station WNEW, BusinessWeek magazine, research company New Energy Finance, the Bureau of National Affairs and the financial software company Bloomberg PolarLake. On July 9, 2014, Bloomberg L.P. acquired RTS Realtime Systems, a global provider of low-latency connectivity and trading support services. [29] On August 13, 2019, Bloomberg acquired RegTek.Solutions in a move to expand its suite of regulatory reporting and data management services. [30]

In 1992, Bloomberg L.P. purchased New York Radio station WNEW for $13.5 million. The station was converted into an all-news format, known as Bloomberg Radio, and the call letters were changed to WBBR. [31]

Bloomberg L.P. bought a weekly business magazine, BusinessWeek, from McGraw-Hill in 2009. The company acquired the magazine—which was suffering from declining advertising revenue and limited circulation numbers—to attract general business to its media audience composed primarily of terminal subscribers. [32] Following the acquisition, BusinessWeek was renamed Bloomberg Businessweek. In 2018, Joel Weber was named editor of the magazine. [33]

In 2009, Bloomberg L.P. purchased New Energy Finance, a data company focused on energy investment and carbon markets research based in the United Kingdom. [34] New Energy Finance was created by Michael Liebreich in 2004, to provide news, data and analysis on carbon and clean energy markets. Bloomberg L.P. acquired the company to become an industry resource for information to support low-carbon energy development. It was renamed to Bloomberg New Energy Finance or BNEF for short. Liebreich continued to lead the company, serving as the chief executive officer [35] until 2014, when he stepped down as CEO but remained involved as Chairman of the Advisory Board. [36]

On December 16, 2015, it was announced that Barclays had agreed to sell its index business, Barclays Risk Analytics and Index Solutions Ltd (BRAIS), to Bloomberg L.P. for £520 million, or about $787 million. [44] The company will be renamed Bloomberg Index Services Limited.

In September 2014, Bloomberg sold its Bloomberg Sports analysis division to the data analysis firm STATS LLC for a fee rumored to be between $15 million and $20 million. [45]

On December 10, 2019, Bloomberg Media announced that it has reached an agreement to acquire CityLab, The Atlantic’s award-winning news site for solutions-based journalism on urban innovation and the future of cities. This was Bloomberg's first acquisition of an editorial property by the news and financial data company in over a decade. [46]

Bloomberg Markets is a monthly magazine launched in 1992, that provides in-depth coverage of global financial markets for finance professionals. [55] In 2010, the magazine was redesigned in an effort to update its readership beyond Bloomberg terminal users. [56] Michael Dukmejian has served as the magazine's publisher since 2009. [57]

Bloomberg Pursuits was a bimonthly luxury magazine distributed exclusively to Bloomberg terminal users and to newsstands. It ceased publication in 2016. A digital edition and show on Bloomberg Television continue under the same name. [58]

Bloomberg Entity Exchange is a web-based, centralised and secure platform for buy side firms, sell side firms, corporations and insurance firms, banks or brokers to fulfill Know Your Customer (KYC) compliance requirements. It was launched on May 25, 2016. [59] [60]

Launched in 2011, Bloomberg Government is an online service that provides news and information about politics, along with legislative and regulatory coverage. [61] [62]

In 2009, Bloomberg L.P. introduced Bloomberg Law, a subscription service for real-time legal research. [63] A subscription to the service provides access to law dockets, legal filings, and reports from Bloomberg legal analysts as well as business news and information. [64]

Bloomberg Opinion, formerly Bloomberg View, is an editorial division of Bloomberg News which launched in May 2011. [65] The site provides editorial content from columnists, authors and editors about news issues and is available for free on the company's website. [66] David Shipley, former Op-Ed page editor at The New York Times, serves as Bloomberg Opinion's executive editor. [67]

Bloomberg Tradebook is an electronic agency brokerage for equity, futures, options and foreign exchange trades. [68] Its "buyside" services include access to trading algorithms, analytics and marketing insights, while its "sellside" services include connection to electronic trading networks and global trading capabilities. [69] Bloomberg Tradebook was founded in 1996, as an affiliate of Bloomberg L.P. [68]

Bloomberg Beta is a venture capital firm capitalized by Bloomberg L.P. [70] Founded in 2013, the $75 million fund is focused on investments in areas broadly of interest to Bloomberg L.P., and invests purely for financial return. It is headquartered in San Francisco. [71]

The Bloomberg Innovation Index is an annual ranking of how innovative countries are. It is based on six criteria: research and development, manufacturing, high-tech companies, post-secondary education, research personnel, and patents. [72] [73] Bloomberg uses data from the World Bank, the International Monetary Fund, the World Intellectual Property Organization, the United States Patent and Trademark Office, the OECD and UNESCO to compile the ranking. [74]

Bloomberg Live is a series of conferences targeted towards business people. [76]

QuickTake (formerly TicToc) is Bloomberg's social media brand. Originally launched on Twitter, it was expanded to other platforms including Facebook, Instagram, YouTube and is also available on Amazon's Alexa. It will also play at several screens across multiple airports in the United States and Canada. The platform is managed by a team of 70 people, consisting of editors, producers and social media specialists located across three bureaus in New York, London and Hong Kong. [77] In December 2019, TicToc was renamed to QuickTake in order to avoid confusion with the social media platform TikTok. [78]

Bloomberg New Economy Forum is an invitation-only event for business executives, government officials, and academics.[ citation needed] The inaugural event was held in 2018 in Singapore. In 2019, the annual forum will take place in Beijing, China. [79] 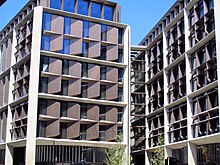 The Bloomberg L.P. offices are non-hierarchical – even executives do not have private offices. [42] All employees sit at identical white desks each topped with a custom-built Bloomberg computer terminal. The office space also includes rows of flat-panel monitors overhead that display news, market data, the weather and Bloomberg customer service statistics. [84]

In 1996, former Bloomberg L.P. sales representative Mary Ann Olszewski sued the company, alleging that she was drugged and raped by her supervisor, Bryan Lewis, and claimed she was terminated shortly after reporting the incident in a May 25, 1995 meeting. [86] [87] The lawsuit also alleged the company internally investigated Olszewski, attempting to get coworkers to portray her as “flirtatious” or a “sex hound.” [87] Olszewski also claimed that male employees at the company engaged in the “sexual degradation of women” and that the company “took no steps to prevent or curtail the ongoing sexual harassment of female employees by Michael Bloomberg.” [86] Bloomberg, on behalf of Bloomberg L.P., testified that he was made aware of the rape allegation and offered to move Olszewski into another sales unit. [87] Bloomberg also testified that he did not find Olszewski's allegation genuine because there was not "an unimpeachable third-party witness” present during the alleged event, elaborating that “there are times when three people are together.” [88]

The case was dismissed by a federal judge in 1999 after Olszewski's lawyer had ignored repeated deadlines to submit a response to a motion to end the case. The case was re-opened by another lawyer in 2000, but disappeared from the court docket in 2001. [87]

In 1997, former Bloomberg L.P. sales executive Sekiko Sakai Garrison filed a lawsuit against the company and Michael Bloomberg, alleging sexual harassment and wrongful termination. [89] [90] Garrison alleged that when she told Bloomberg that she was pregnant, he told her to "Kill it!" and said "Great! Number 16," referring to the number of women in the company who were pregnant or on maternity leave at the time. [88] According to the lawsuit, Garrison told a manager about the incident but was told to "forget it ever happened" before being fired. [86]

Garrison also claimed that Bloomberg told female salespeople to “line up to give him [oral sex] as a wedding present,” referring to a male employee who was getting married. [86] The lawsuit also alleged that Bloomberg berated a female employee who had trouble finding a nanny, saying, “It’s a f------ baby! All it does is eat and s---! It doesn’t know the difference between you and anyone else! All you need is some black who doesn’t even have to speak English to rescue it from a burning building!” [86] [89]

The company did not admit any wrongdoing, but settled the lawsuit out of court in 2000. [87]

In September 2007, the Equal Employment Opportunity Commission (EEOC) filed a class-action lawsuit against Bloomberg L.P. on behalf of more than 80 female employees who argued that Bloomberg L.P. engaged in discrimination against women who took maternity leave. [91] In August 2011, Judge Loretta A. Preska of the Federal District Court in Manhattan dismissed the charges, writing that the Equal Employment Opportunity Commission did not present sufficient evidence to support their claim. [92]

In September 2013, Preska dismissed an EEOC lawsuit on behalf of 29 pregnant employees of Bloomberg L.P. [93] In addition, she dismissed pregnancy bias claims from five individual plaintiffs, and allowed part of the case from a sixth plaintiff to proceed. [94]

Bloomberg L.P. v. Board of Governors of the Federal Reserve

Bloomberg L.P. brought a lawsuit against the Board of Directors of the Federal Reserve System ( Bloomberg L.P. v. Board of Governors of the Federal Reserve System) to force the Fed to share details about its lending programs during the U.S. Government bailout in 2008. [95] The records documented Federal Reserve loans issued to financial firms and revealed the identities of the firms, the amounts borrowed and the collateral posted in return. [96] Bloomberg L.P. won at the trial court level. [97] The Second Circuit Court ruled in favor of Bloomberg L.P. in March 2010, but the case was appealed to the Supreme Court by a group of large U.S. commercial banks in October. In March 2011, the Supreme Court let stand the Second Circuit Court ruling mandating the release of Fed bailout details. [98]