From Wikipedia, the free encyclopedia
(Redirected from Alabama-Coushatta) 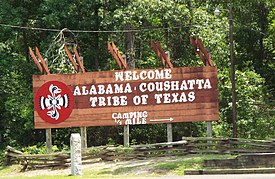 Large sign at the Alabama–Coushatta Reservation east of Livingston, Texas 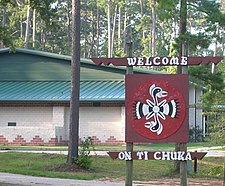 Smaller sign at the Alabama–Coushatta Reservation east of Livingston, Texas

The Alabama–Coushatta Tribe of Texas is a federally recognized tribe of Alabama and Koasati in Polk County, Texas. The tribe hosts an annual powwow in early June. These peoples are descended from members of the historic Muscogee or Creek Confederacy of numerous tribes in the southeast United States, particularly Georgia and Alabama.

They are one of eight Federally recognized tribes whose members are descended from the Creek Confederacy of the Southeast. Four tribes are located in Oklahoma, to where most of the Creeks were forcibly removed from the indigenous Creek homeland in Alabama and Western Georgia in the 1830s during the trail of tears under Indian Removal, one tribe is in Louisiana where another band of Creeks fled European encroachment in two waves in the late 1700s and the early 1800s and another tribe comprises the Poarch Band of Creeks who remained in Alabama. The Seminole Indian Nation in Florida also includes a large percentage of descendants of the Creek Confederacy who relocated there and merged with another tribe.

Under pressure from European-American settlement, the ancestors of this tribe were Alabama and Coushatta peoples who migrated from Alabama and the Southeast into Louisiana and finally east Texas when it was under Spanish rule in the late eighteenth century. They settled in an area known as Big Thicket and adapted their culture to the environment of forest and waters. [1]

When the area began to be settled by European Americans from the United States, the tribes established friendly relations and traded with the new settlers. Sam Houston helped protect them during years of conflicts with other Native Americans in the area. After annexation of Texas by the United States, settlement increased and the tribes were under pressure again. They appealed to the state to have land set aside for their exclusive use. [1]

As part of the Indian termination policy followed by the US government between the 1940s and 1960s, the Alabama Coushatta Tribe was targeted. On 23 August 1954 the United States Congress passed laws to terminate the federal relationship with the tribe. Public Law ch. 831, §1, 68 Stat. 768 provided that the Secretary of the Interior was to transfer to the State of Texas the tribal lands for the benefit of the tribe. In addition, it terminated the federal trust relationship to the tribe and the individual members of the tribe and canceled any federal debts. [3] In 1965 under House Bill 1096, 59th Texas Legislature, Regular Session, the newly formed Texas Indian Commission took over state administration and supervision for the Alabama-Coushatta Indian Reservation.

On 22 March 1983, Texas Attorney General Jim Mattox released an opinion (JM-17) stating that the state's assumption of power over the property of the Alabama–Coushatta was a violation of the Texas Constitution. He stated that as the federal government had withdrawn its recognition the tribe was "merely an unincorporated association under Texas law, with the same legal status as other private associations ... the 3,071 acre tract is entirely free from any legally meaningful designation as an 'Indian Reservation'." [4] In response to concerns by the tribe, Representative Ronald D. Coleman of Texas introduced a federal bill on 28 February 1985 to restore federal jurisdiction for the tribe. [5] Because the initial bill HR 1344 allowed gambling, amendments were made and the Yselta del Sur Pueblo and Alabama and Coushatta Indian Tribes of Texas Restoration Act was reintroduced as HR 318. [6] Public Law 100-89, 101 STAT. 666 was enacted 18 August 1987 and restored the federal relationship with the tribe. Section 207 (25 U.S.C. § 737) [1] specifically prohibits all gaming activities prohibited by the laws of the state of Texas. [7]

The Alabama–Coushatta Indian Reservation was established in 1854, [8] when the state bought "1,110.7 acres of land for the Alabama Indian reservation. About 500 tribe members settled on this land during the winter of 1854–55. In 1855 the Texas legislature appropriated funds to purchase 640 acres for the Coushattas" but never followed through. [1] The Coushatta began to live with the Alabama on their reservation.

Both the peoples struggled after the Civil War, as few spoke English and they had difficulty finding jobs. [1] They acquired more land and today their reservation is 4,593.7 acres large, located 17 miles east of Livingston, Texas. About half the tribe, or 500 people, live on the reservation. [1]

Both the Alabama and Koasati languages are Muskogean languages. [1]

The Alabama–Coushatta Tribe of Texas is headquartered in Livingston, Texas. The tribe is governed by a democratically elected seven-member council, as well as a principal chief and second chief who serve for life. The current administration is as follows: