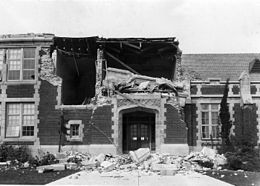 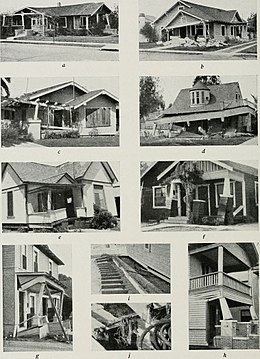 The 1933 Long Beach earthquake took place on March 10 at 5:54 P.M. PST south of downtown Los Angeles. The epicenter was offshore, southeast of Long Beach, California, on the Newport–Inglewood Fault. The earthquake had a magnitude estimated at 6.4 Mw, and a maximum Mercalli intensity of VIII (Severe). Damage to buildings was widespread throughout Southern California. 115 to 120 fatalities and an estimated forty million dollars' worth of property damage resulted. The majority of the fatalities resulted from people running out of buildings exposing themselves to the falling debris.

The major damage occurred in the densely-populated city of Long Beach on the south-facing coast of Los Angeles County. However, the damage was also found to have extended to the industrial area south of downtown Los Angeles. The magnitude of the earthquake is considered to be medium but a significant amount of damage was left due to unfavorable geological conditions (landfill, water-soaked alluvium) combined with poorly constructed buildings. In Long Beach, buildings collapsed, water tanks fell through roofs, and houses were tossed off their foundations. School buildings were among the structures that incurred the most severe damage. [6] It was recognized that unreinforced masonry bearing walls is the reason for school buildings suffering so much damage in the wake of the earthquake. [7]

This earthquake prompted the government to play an active role in disaster relief. The government created The Reconstruction Finance Corporation, providing loans for the reconstruction of buildings that were affected during the natural disaster. The Bureau of Public Roads also took action to rebuild roads, highways, and bridges. [9] The economy of Long Beach was able to return to normal swiftly because of the rise of the aircraft industry. To support the World War II efforts, Long Beach created naval yards and increased the number of aircraft produced. This directly helped Long Beach repair and stabilize the economy after the disaster. [10]

The earthquake plays a major part in the novel The Last Tycoon (1941), by F. Scott Fitzgerald. During the disruption caused by the quake, the hero, Monroe Stahr, meets Kathleen Moore, with whom he falls in love.

The earthquake is also included in John Fante's Ask the Dust (1939).

A radio newscast announces the aftermath of the earthquake in Season One, Episode Five of The Waltons.

This earthquake was mentioned by one of the guest characters, played by actor Ian Wolfe in Season Three, Episode One of Police Woman, who also mentions the 1971 San Fernando earthquake as the "Big One of '71".

Footage of the earthquake appeared in the film Encounters with Disaster, released in 1979 and produced by Sun Classic Pictures.