Stonewall 50 – WorldPride NYC 2019 was a series of LGBTQ events and celebrations in June 2019, marking the 50th anniversary of the 1969 Stonewall riots. It was also the first time WorldPride was held in the United States. [1] [2] [3] Held primarily in the metropolitan New York City area, the theme for the celebrations and educational events was "Millions of moments of Pride." [4] [5] [6] The celebration was the largest LGBTQ event in history, with an official estimate of five million attending Pride weekend in Manhattan alone, [7] including an estimated four million in attendance at the parade. [8] [9] The twelve-hour parade included 150,000 pre-registered participants among 695 groups. [10]

The Stonewall Uprising of June 1969 was a series of spontaneous, violent demonstrations by members of the gay (LGBTQ) community in Greenwich Village, New York City. [11] Patrons of the Stonewall Inn, gay street kids from the surrounding area, and members of the community who came from neighboring gay and lesbian bars, fought back against an early morning police raid, refusing to be arrested for simply patronizing a gay bar and being out in public. The Stonewall riots are widely considered to be the most important event leading to the gay liberation movement [12] [13] [14] [15] and the modern fight for LGBT rights in the United States. [16] [17] 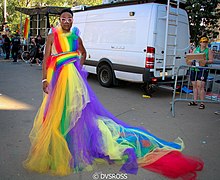 The Stonewall 50 - WorldPride events were held throughout June, which is traditionally Pride month in New York City and worldwide, under the auspices of the annual NYC Pride March. [2] The events represented the largest LGBTQ celebration in history. Produced by Heritage of Pride (HOP), they commemorated the 50th anniversary of the Stonewall uprising. Organizers and city authorities estimated 150,000 parade marchers, and five million visitors attending Pride weekend in Manhattan alone. [7]

HOP's Stonewall 50 Planning Committee began work in July, 2009. Additional programming was envisioned for the coming years and by 2011 new events had become a reality. This would eventually lead to a successful bid for the first US hosted WorldPride.

The concept for WorldPride events were established in 1997 when Heritage of Pride hosted the 16th annual conference of InterPride. WorldPride, licensed by InterPride and organized by one of its members, is an event that promotes LGBTQ pride issues on an international level through parades, festivals and other cultural activities. The inaugural WorldPride was held in Rome in 2000. The host cities are selected by InterPride, an international association of pride coordinators, at its annual general meeting. [19] [20] [21] [22] 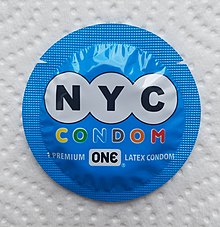 A condom given out by NYC Health Department during the Stonewall 50 – WorldPride NYC 2019 celebrations.