From Wikipedia, the free encyclopedia
Direct vote on a specific proposal 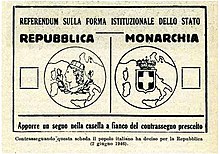 The ballot of the 1946 referendum in Italy deciding on having either a republic or a monarchy as the form of government.

A referendum (plural: referendums or less commonly referenda) is a direct vote by the electorate on a proposal, law, or political issue. This is in contrast to an issue being voted on by a representative. This may result in the adoption of a new policy or specific law, or the referendum may be only advisory. In some countries, it is synonymous with or commonly known by other names including plebiscite, votation, popular consultation, ballot question, ballot measure, or proposition.

Some definitions of 'plebiscite' suggest it is a type of vote to change the constitution or government of a country. [1] The word, 'referendum' is often a catchall, used for both legislative referrals and initiatives.

'Referendum' is the gerundive form of the Latin verb referre, literally "to carry back" (from the verb ferre, "to bear, bring, carry" plus the inseparable prefix re-, here meaning "back" [2]). As a gerundive is an adjective, [3] not a noun, [4] it cannot be used alone in Latin, and must be contained within a context attached to a noun such as Propositum quod referendum est populo, "A proposal which must be carried back to the people". The addition of the verb sum (3rd person singular, est) to a gerundive, denotes the idea of necessity or compulsion, that which "must" be done, rather than that which is "fit for" doing. Its use as a noun in English is not considered a strictly grammatical usage of a foreign word but is rather a freshly coined English noun, which follows English grammatical usage, not Latin grammatical usage. This determines the form of the plural in English, which according to English grammar should be "referendums". The use of "referenda" as a plural form in English (treating it as a Latin word and attempting to apply to it the rules of Latin grammar) is unsupportable according to the rules of both Latin and English grammar. The use of "referenda" as a plural form is posited hypothetically as either a gerund or a gerundive by the Oxford English Dictionary, which rules out such usage in both cases as follows: [5]

Referendums is logically preferable as a plural form meaning 'ballots on one issue' (as a Latin gerund, [6] referendum has no plural). The Latin plural gerundive 'referenda', meaning 'things to be referred', necessarily connotes a plurality of issues. [7]

It is closely related to agenda, "those matters which must be driven forward", from ago, to impel or drive forwards; and memorandum, "that matter which must be remembered", from memoro, to call to mind, corrigenda, from rego, to rule, make straight, those things which must be made straight (corrected), etc.

The term 'plebiscite' has a generally similar meaning in modern usage and comes from the Latin plebiscita, which originally meant a decree of the Concilium Plebis (Plebeian Council), the popular assembly of the Roman Republic. Today, a referendum can also often be referred to as a plebiscite, but in some countries the two terms are used differently to refer to votes with differing types of legal consequences. [8]

In Ireland, 'plebiscite' referred to the vote to adopt its constitution, but a subsequent vote to amend the constitution is called a 'referendum', as is a poll of the electorate on a non-constitutional bill.

The name and use of the 'referendum' is thought to have originated in the Swiss canton of Graubünden as early as the 16th century. [12] [13]

After a reduction in the number of referendums in the Mid-twentieth century, the referendum as a political tool has been increasing in popularity since the 1970s. This increase has been attributed to dealignment of the public with political parties, as specific policy issues became more important to the public than party identifiers. [14]

The term "referendum" covers a variety of different meanings, and the terminology is different depending on the country that holds them. A referendum can be binding or advisory. [15] In some countries, different names are used for these two types of referendum. Referendums can be further classified by who initiates them. [16]

David Altman proposes four dimensions that referendums can be classified by: [17]

A mandatory referendum is a class of referendum required to be voted on if certain conditions are met or for certain government actions to be taken. They do not require any signatures from the public. In areas that use referendums a mandatory referendum is commonly used as a legally required step for ratification for constitutional changes, ratifying international treaties and joining international organizations, and certain types of public spending. [18]

Typical types of mandatory referendums include:

An optional referendum is a class of referendums that is put to the vote as a result of a demand. This may come from the executive branch, legislative branch, or a request from the people (often after meeting a signature requirement).

Types of optional referendums include:

From a political-philosophical perspective, referendums are an expression of direct democracy, but today, most referendums need to be understood within the context of representative democracy. They tend to be used quite selectively, covering issues such as changes in voting systems, where currently elected officials may not have the legitimacy or inclination to implement such changes.

A referendum usually offers the electorate a straight choice between accepting or rejecting a proposal. However some referendums give voters multiple choices, and some use transferable voting.

In Switzerland, for example, multiple choice referendums are common. Two multiple choice referendums were held in Sweden, in 1957 and in 1980, in which voters were offered three options. In 1977, a referendum held in Australia to determine a new national anthem was held, in which voters had four choices. In 1992, New Zealand held a five-option referendum on their electoral system. In 1982, Guam had a referendum that used six options, with an additional blank option for those wishing to (campaign and) vote for their own seventh option.

A multiple choice referendum poses the question of how the result is to be determined. They may be set up so that if no single option receives the support of an absolute majority (more than half) of the votes, resort can be made to the two-round system or instant-runoff voting, which is also called IRV and PV.

In 2018 the Irish Citizens' Assembly considered the conduct of future referendums in Ireland, with 76 of the members in favour of allowing more than two options, and 52% favouring preferential voting in such cases. [24] Other people regard a non-majoritarian methodology like the Modified Borda Count (MBC) as more inclusive and more accurate.

Swiss referendums offer a separate vote on each of the multiple options as well as an additional decision about which of the multiple options should be preferred. In the Swedish case, in both referendums the 'winning' option was chosen by the Single Member Plurality ("first past the post") system. In other words, the winning option was deemed to be that supported by a plurality, rather than an absolute majority, of voters. In the 1977 Australian referendum, the winner was chosen by the system of preferential instant-runoff voting (IRV). Polls in Newfoundland (1949) and Guam (1982), for example, were counted under a form of the two-round system, and an unusual form of TRS was used in the 1992 New Zealand poll.

Although California has not held multiple-choice referendums in the Swiss or Swedish sense (in which only one of several counter-propositions can be victorious, and the losing proposals are wholly null and void), it does have so many yes-or-no referendums at each election day that conflicts arise. The State's constitution provides a method for resolving conflicts when two or more inconsistent propositions are passed on the same day. This is a de facto form of approval voting—i.e. the proposition with the most "yes" votes prevails over the others to the extent of any conflict.

Another voting system that could be used in multiple-choice referendum is the Condorcet method.

Quorums are typically introduced to prevent referendum results from being skewed by low turnout or decided by a motivated minority of voters.

In the 2005 Italian fertility laws referendum, opposition to the proposed loosening of laws on research on embryos and on allowing in-vitro fertilization, campaigned for people to abstain from voting to drive down turnout. Although a majority of people voted yes for the changes in the law, the results were invalid because participation was low. [7]

International tribunals have traditionally not interfered with referendum disputes. In 2021, the European Court of Human Rights extended its jurisdiction to referendums in its judgment Toplak and Mrak v. Slovenia, initiated by two disabled voters over polling place access. [27] 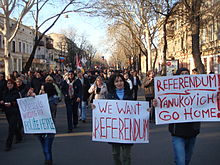 In Political Governance states that voters in a referendum are more likely to be driven by transient whims than by careful deliberation, or that they are not sufficiently informed to make decisions on complicated or technical issues. [28] Also, voters might be swayed by propaganda, strong personalities, intimidation, and expensive advertising campaigns. James Madison argued that direct democracy is the " tyranny of the majority".

Some opposition to the referendum has arisen from its use by dictators such as Adolf Hitler and Benito Mussolini who, it is argued, [29] used the plebiscite to disguise oppressive policies as populism. Dictators may also make use of referendums as well as show elections to further legitimize their authority such as António de Oliveira Salazar in 1933; Benito Mussolini in 1934; Adolf Hitler in 1934, 1936; Francisco Franco in 1947; Park Chung-hee in 1972; and Ferdinand Marcos in 1973. Hitler's use of plebiscites is argued[ by whom?] as the reason why, since World War II, there has been no provision in Germany for the holding of referendums at the federal level.

In recent years, referendums have been used strategically by several European governments trying to pursue political and electoral goals. [30]

In 1995, John Bruton considered that

All governments are unpopular. Given the chance, people would vote against them in a referendum. Therefore avoid referendums. Therefore don’t raise questions which require them, such as the big versus the little states. [31]

Closed questions and the separability problem

Some critics of the referendum attack the use of closed questions. A difficulty called the separability problem can plague a referendum on two or more issues. If one issue is in fact, or in perception, related to another on the ballot, the imposed simultaneous voting of first preference on each issue can result in an outcome which is displeasing to most.

Several commentators have noted that the use of citizens' initiatives to amend constitutions has so tied the government to a jumble of popular demands as to render the government unworkable. A 2009 article in The Economist argued that this had restricted the ability of the California state government to tax the people and pass the budget, and called for an entirely new Californian constitution. [32]