Psychedelic soul (originally called black rock [1] or conflated with psychedelic funk [2]) is a music genre that emerged in the late 1960s and saw Black soul musicians embrace elements of psychedelic rock, including its production techniques, instrumentation, effects units ( wah-wah pedal, phaser, etc.) and drug influences. [3] It came to prominence in the late 1960s and continued into the 1970s, playing a major role in the development of funk and disco. 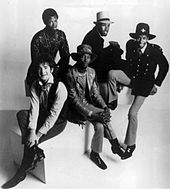 The Chambers Brothers in 1970

Following the lead of Jimi Hendrix in psychedelic rock, in the late 1960s psychedelia began to have a widespread impact on Afro American musicians, particularly the stars of the Motown label. [3] Influenced by the civil rights movement, it had a darker and more political edge than much psychedelic rock. [3] Building on the funk sound of James Brown, it was pioneered by Sly and the Family Stone with songs like " Dance to the Music" (1968), " Everyday People" (1968) and " I Want to Take You Higher" (1969), which had a sound that emphasized distorted electric rhythm guitar and strong basslines. [7] Also important were the Temptations and their producer Norman Whitfield, who moved from a relatively light vocal group into more hard-edged and topical material like " Cloud Nine" (1968), " Runaway Child, Running Wild" (1969), and " Psychedelic Shack" (1969). [7]

George Clinton's interdependent Funkadelic and Parliament ensembles and their various spin-offs, taking influence from Detroit rock groups including MC5 and The Stooges, used extended distorted guitar solos and psychedelic sound effects, coupled with surreal imagery and stage antics, especially on early Funkadelic albums such as Funkadelic (1970), Free Your Mind... and Your Ass Will Follow (1970), and Maggot Brain (1971); and Parliament album Osmium (1970), [1] producing more than forty singles, including three in the US top ten, and three platinum albums. [10] Shuggie Otis's 1974 album Inspiration Information was a psychedelic soul record that emerged too late to take advantage of the style's popularity, but later found acclaim when it was reissued in 2001. [11]

While psychedelic rock began to waver at the end of the 1960s, psychedelic soul continued into the 1970s, peaking in popularity in the early years of the decade, and only disappearing in the late 1970s as tastes began to change. [3] Isaac Hayes and Curtis Mayfield added orchestral instrumentation, creating cinematic soul, which ultimately led to disco. [12] Acts like Earth, Wind & Fire, Kool & the Gang, and Ohio Players, who began as psychedelic soul artists, incorporated its sounds into funk music and eventually the disco which partly replaced it. [13]