From Wikipedia, the free encyclopedia
For the concurrent period of race riots during the American civil rights movement, see Long hot summer of 1967. For other uses, see Summer of Love (disambiguation).
1967 social phenomenon in San Francisco

The Summer of Love was a social phenomenon that occurred during mid-1967, when as many as 100,000 people, mostly young people sporting hippie fashions of dress and behavior, converged in San Francisco's neighborhood of Haight-Ashbury. [1] [2] More broadly, the Summer of Love encompassed the hippie music, drug, anti-war, and free-love scene throughout the American west coast, and as far away as New York City. [3] [4]

Hippies, sometimes called flower children, were an eclectic group. Many were suspicious of the government, rejected consumerist values, and generally opposed the Vietnam War. A few were interested in politics; others were concerned more with art (music, painting, poetry in particular) or spiritual and meditative practices. [4] 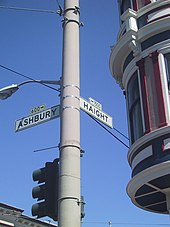 Junction of Haight and Ashbury Streets, San Francisco, celebrated as the central location of the Summer of Love

Inspired by the Beat Generation of authors of the 1950s, who had flourished in the North Beach area of San Francisco, those who gathered in Haight-Ashbury during 1967 allegedly rejected the conformist and materialist values of modern life; there was an emphasis on sharing and community. [5] The Diggers established a Free Store, and a Free Clinic where medical treatment was provided. [6]

It was at this event that Timothy Leary voiced his phrase, " turn on, tune in, drop out". [11] This phrase helped shape the entire hippie counterculture, as it voiced the key ideas of 1960s rebellion. These ideas included communal living, political decentralization, and dropping out. The term "dropping out" became popular among many high school and college students, many of whom would abandon their conventional education for a summer of hippie culture.

The event was announced by the Haight-Ashbury's hippie newspaper, the San Francisco Oracle:

A new concept of celebrations beneath the human underground must emerge, become conscious, and be shared, so a revolution can be formed with a renaissance of compassion, awareness, and love, and the revelation of unity for all mankind. [12]

The gathering of approximately 30,000 at the Human Be-In helped publicize hippie fashions. [13]

The term "Summer of Love" originated with the formation of the Council for the Summer of Love during the spring of 1967 as a response to the convergence of young people on the Haight-Ashbury district. The Council was composed of The Family Dog, The Straight Theatre, The Diggers, The San Francisco Oracle, and approximately twenty-five other people, who sought to alleviate some of the problems anticipated from the influx of people expected during the summer. The Council also assisted the Free Clinic and organized housing, food, sanitation, music and arts, along with maintaining coordination with local churches and other social groups. [14]

An anti-Vietnam War march in San Francisco on April 15, 1967

The increasing numbers of youth traveling to the Haight-Ashbury district alarmed the San Francisco authorities, whose public warning was that they would keep hippies away. Adam Kneeman, a long-time resident of the Haight-Ashbury, recalls that the police did little to help the hordes of newcomers, much of which was done by residents of the area. [15]

College and high-school students began streaming into the Haight during the spring break of 1967 and the local government officials, determined to stop the influx of young people once schools ended for the summer, unwittingly brought additional attention to the scene, and a series of articles in local papers alerted the national media to the hippies' growing numbers. By spring, some Haight-Ashbury residents responded by forming the Council of the Summer of Love, giving the event a name. [16]

The media's coverage of hippie life in the Haight-Ashbury drew the attention of youth from all over America. Hunter S. Thompson termed the district "Hashbury" in The New York Times Magazine, and the activities in the area were reported almost daily. [17]

The event was also reported by the counterculture's own media, particularly the San Francisco Oracle, the pass-around readership of which is thought to have exceeded a half-million people that summer, [18] and the Berkeley Barb.

The media's reportage of the "counterculture" included other events in California, such as the Fantasy Fair and Magic Mountain Music Festival in Marin County and the Monterey Pop Festival, both during June 1967. At Monterey, approximately 30,000 people gathered for the first day of the music festival, with the number increasing to 60,000 on the final day. [19] Additionally, media coverage of the Monterey Pop Festival facilitated the Summer of Love as large numbers of hippies traveled to California to hear favorite bands such as The Who, Grateful Dead, the Animals, Jefferson Airplane, Quicksilver Messenger Service, The Jimi Hendrix Experience, Otis Redding, The Byrds, and Big Brother and the Holding Company featuring Janis Joplin. [20]

"San Francisco (Be Sure to Wear Flowers in Your Hair)"

Musician John Phillips of the band The Mamas & the Papas wrote the song " San Francisco (Be Sure to Wear Flowers in Your Hair)" for his friend Scott McKenzie. It served to promote both the Monterey Pop Festival that Phillips was helping to organize, and to popularize the flower children of San Francisco. [21] Released on May 13, 1967, the song was an instant success. By the week ending July 1, 1967, it reached number four on the Billboard Hot 100 in the United States, where it remained for four consecutive weeks. [22] Meanwhile, the song charted at number one in the United Kingdom and much of Europe. The single is purported to have sold more than 7 million copies worldwide. [23]

In Manhattan, near the Greenwich Village neighborhood, during a concert in Tompkins Square Park on Memorial Day of 1967, some police officers asked for the music's volume to be reduced. [4] In response, some people in the crowd threw various objects, and 38 arrests ensued. [4] A debate about the "threat of the hippie" ensued between Mayor John Lindsay and Police Commissioner Howard Leary. [4] After this event, Allan Katzman, the editor of the East Village Other, predicted that 50,000 hippies would enter the area for the summer. [4]

Double that amount, as many as 100,000 young people from around the world, flocked to San Francisco's Haight-Ashbury district, as well as to nearby Berkeley and to other San Francisco Bay Area cities, to join in a popularized version of the hippieism. [24] A Free Clinic was established for free medical treatment, and a Free Store gave away basic necessities without charge to anyone who needed them. [25] [26] [27] [28]

The Summer of Love attracted a wide range of people of various ages: teenagers and college students drawn by their peers and the allure of joining an alleged cultural utopia; middle-class vacationers; and even partying military personnel from bases within driving distance. The Haight-Ashbury could not accommodate this influx of people, and the neighborhood scene quickly deteriorated, with overcrowding, homelessness, hunger, drug problems, and crime afflicting the neighborhood. [25]

Haight Ashbury was a ghetto of bohemians who wanted to do anything—and we did but I don't think it has happened since. Yes there was LSD. But Haight Ashbury was not about drugs. It was about exploration, finding new ways of expression, being aware of one's existence. [29]

After losing his untenured position as an instructor on the Psychology Faculty at Harvard University, Timothy Leary became a major advocate for the recreational use of psychedelic drugs. [11] After taking psilocybin, a drug extracted from certain mushrooms that causes effects similar to those of LSD, Leary endorsed the use of all psychedelics for personal development. He often invited friends as well as an occasional graduate student to consume such drugs along with him and colleague Richard Alpert.

On the West Coast, author Ken Kesey, a prior volunteer for a CIA-sponsored LSD experiment, also advocated the use of the drug. [11] Soon after participating, he was inspired to write the bestselling novel One Flew Over the Cuckoo's Nest. [11] Subsequently, after buying an old school bus, painting it with psychedelic graffiti and attracting a group of similarly-minded individuals he dubbed the Merry Pranksters, Kesey and his group traveled across the country, often hosting "acid tests" where they would fill a large container with a diluted low dose form of the drug and give out diplomas to those who passed their test. [11]

Along with LSD, cannabis was also much used during this period. However, as a result, crime increased among users because new laws were subsequently enacted to control the use of both drugs. The users thereof often had sessions to oppose the laws, including The Human Be-In referenced above as well as various "smoke-ins" during July and August, [30] however, their efforts at repeal were unsuccessful. 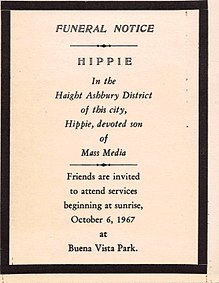 By the end of summer, many participants had left the scene to join the back-to-the-land movement of the late '60s, to resume school studies, or simply to "get a job". Those remaining in the Haight wanted to commemorate the conclusion of the event. A mock funeral entitled "The Death of the Hippie" ceremony was staged on October 6, 1967, and organizer Mary Kasper explained the intended message: [16]

We wanted to signal that this was the end of it, to stay where you are, bring the revolution to where you live and don't come here because it's over and done with. [31]

In New York, the rock musical drama Hair, which told the story of the hippie counterculture and sexual revolution of the 1960s, began Off-Broadway on October 17, 1967. [32]

The "Second Summer of Love" (a term which generally refers to the summers of both 1988 and 1989) was a renaissance of acid house music and rave parties in Britain. The culture supported MDMA use and some LSD use. The art had a generally psychedelic emotion reminiscent of the 1960s. [33] [34] [35] 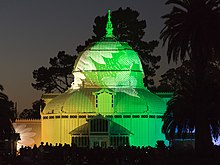 Illumination of the Conservatory of Flowers on June 21, 2017

In 2016, 2b1 Multimedia and The Council of Light, once again, began the planning for the 50th Anniversary of the Summer of Love in Golden Gate Park in San Francisco. By the beginning of 2017, the council had gathered about 25 poster artists, about 10 of whom submitted their finished art, but it was never printed. The council was also contacted by many bands and musicians who wanted to be part of this historic event, all were waiting for the date to be determined before a final commitment. [39] New rules enforced by the San Francisco Parks and Recreational Department (PRD) prohibited the council from holding a free event of the proposed size. There were many events planned for San Francisco in 2017, many of which were 50th Anniversary-themed. However, there was no free concert. The PRD later hosted an event originally called “Summer Solstice Party,” but it was later renamed “50th Anniversary of the Summer of Love” two weeks before commencement. The event had fewer than 20,000 attendees from the local Bay Area.

In frustration, producer Boots Hughston put the proposal of what was by then to be a 52nd anniversary free concert into the form of an initiative intended for the November 6, 2018, ballot. [40] [41] The issue did not make the ballot; however, a more generic Proposition E provides for directing hotel tax fees to a $32 million budget for "arts and cultural organizations and projects in the city." [42]