From Wikipedia, the free encyclopedia
Robotic space probe launched by NASA in 1973 to study the outer solar system

Pioneer 11 (also known as Pioneer G) is a 260-kilogram (570 lb) robotic space probe launched by NASA on April 5, 1973, to study the asteroid belt, the environment around Jupiter and Saturn, solar winds, and cosmic rays. [1] It was the first probe to encounter Saturn, the second to fly through the asteroid belt, and the second to fly by Jupiter. Later, Pioneer 11 became the second of five artificial objects to achieve an escape velocity allowing it to leave the Solar System. Due to power constraints and the vast distance to the probe, the last routine contact with the spacecraft was on September 30, 1995, and the last good engineering data was received on November 24, 1995. [2] [3]

Approved in February 1969, Pioneer 11 and its twin probe, Pioneer 10, were the first to be designed for exploring the outer Solar System. Yielding to multiple proposals throughout the 1960s, early mission objectives were defined as:

Subsequent planning for an encounter with Saturn added many more goals:

Pioneer 11 was built by TRW and managed as part of the Pioneer program by NASA Ames Research Center. [5] A backup unit, Pioneer H, is currently on display in the "Milestones of Flight" exhibit at the National Air and Space Museum in Washington, D.C. [6] Many elements of the mission proved to be critical in the planning of the Voyager program. [7]: 266–8

The Pioneer 11 bus measures 36 centimeters (14 in) deep and with six 76-centimeter-long (30 in) panels forming the hexagonal structure. The bus houses propellant to control the orientation of the probe and eight of the twelve scientific instruments. The spacecraft has a mass of 259 kilograms. [1]: 42

Orientation of the spacecraft was maintained with six 4.5- N, [8] hydrazine monopropellant thrusters: pair one maintains a constant spin-rate of 4.8 rpm, pair two controls the forward thrust, pair three controls attitude. Information for the orientation is provided by performing conical scanning maneuvers to track Earth in its orbit, [9] a star sensor able to reference Canopus, and two Sun sensors. [1]: 42–43

The space probe includes a redundant system transceivers, one attached to the high-gain antenna, the other to an omni-antenna and medium-gain antenna. Each transceiver is 8 watts and transmits data across the S-band using 2110 MHz for the uplink from Earth and 2292 MHz for the downlink to Earth with the Deep Space Network tracking the signal. Prior to transmitting data, the probe uses a convolutional encoder to allow correction of errors in the received data on Earth. [1]: 43

Pioneer 11 uses four SNAP-19 radioisotope thermoelectric generators (RTGs) ( see diagram). They are positioned on two three-rod trusses, each 3 meters (9 feet 10 inches) in length and 120 degrees apart. This was expected to be a safe distance from the sensitive scientific experiments carried on board. Combined, the RTGs provided 155 watts at launch, and decayed to 140 W in transit to Jupiter. The spacecraft requires 100 W to power all systems. [1]: 44–45

Much of the computation for the mission was performed on Earth and transmitted to the probe, where it is able to retain in memory, up to five commands of the 222 possible entries by ground controllers. The spacecraft includes two command decoders and a command distribution unit, a very limited form of a processor, to direct operations on the spacecraft. This system requires that mission operators prepare commands long in advance of transmitting them to the probe. A data storage unit is included to record up to 6,144 bytes of information gathered by the instruments. The digital telemetry unit is then used to prepare the collected data in one of the thirteen possible formats before transmitting it back to Earth. [1]: 38

Pioneer 11 has one additional instrument more than Pioneer 10, a flux-gate magnetometer. [10] 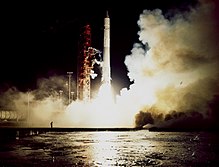 Pioneer 11 launching from Launch Complex 36A.

The Pioneer 11 probe was launched on April 6, 1973 at 02:11:00 UTC, by the National Aeronautics and Space Administration from Space Launch Complex 36A at Cape Canaveral, Florida aboard an Atlas-Centaur launch vehicle, with a Star-37E propulsion module. Its twin probe, Pioneer 10, had been launched a year earlier on March 3, 1972.

Pioneer 11 flew past Jupiter in November and December 1974. During its closest approach, on December 2, it passed 42,828 kilometers (26,612 mi) above the cloud tops. [24] The probe obtained detailed images of the Great Red Spot, transmitted the first images of the immense polar regions, and determined the mass of Jupiter's moon Callisto. Using the gravitational pull of Jupiter, a gravity assist was used to alter the trajectory of the probe towards Saturn and gain velocity. On April 16, 1975, following the Jupiter encounter, the micrometeoroid detector was turned off. [3]

By this time, Voyager 1 and Voyager 2 had already passed Jupiter and were also en route to Saturn, so it was decided to target Pioneer 11 to pass through the Saturn ring plane at the same position that the soon-to-come Voyager probes would use in order to test the route before the Voyagers arrived. If there were faint ring particles that could damage a probe in that area, mission planners felt it was better to learn about it via Pioneer. Thus, Pioneer 11 was acting as a "pioneer" in a true sense of the word; if danger were detected, then the Voyager probes could be rerouted further away from the rings, but missing the opportunity to visit Uranus and Neptune in the process.

Pioneer 11 imaged and nearly collided with one of Saturn's small moons, passing at a distance of no more than 4,000 kilometers (2,500 mi). The object was tentatively identified as Epimetheus, a moon discovered the previous day from Pioneer's imaging, and suspected from earlier observations by Earth-based telescopes. After the Voyager flybys, it became known that there are two similarly sized moons (Epimetheus and Janus) in the same orbit, so there is some uncertainty about which one was the object of Pioneer's near-miss. Pioneer 11 encountered Janus on September 1, 1979 at 14:52 UTC at a distance of 2500 km and Mimas at 16:20 UTC the same day at 103000 km.

Besides Epimetheus, instruments located another previously undiscovered small moon and an additional ring, charted Saturn's magnetosphere and magnetic field and found its planet-size moon, Titan, to be too cold for life. Hurtling underneath the ring plane, the probe sent back pictures of Saturn's rings. The rings, which normally seem bright when observed from Earth, appeared dark in the Pioneer pictures, and the dark gaps in the rings seen from Earth appeared as bright rings.

By 1995, Pioneer 11 could no longer power any of its detectors, so the decision was made to shut it down. [30] On September 29, 1995, NASA's Ames Research Center, responsible for managing the project, issued a press release that began, "After nearly 22 years of exploration out to the farthest reaches of the Solar System, one of the most durable and productive space missions in history will come to a close." It indicated NASA would use its Deep Space Network antennas to listen "once or twice a month" for the spacecraft's signal, until "some time in late 1996" when "its transmitter will fall silent altogether." NASA Administrator Daniel Goldin characterized Pioneer 11 as "the little spacecraft that could, a venerable explorer that has taught us a great deal about the Solar System and, in the end, about our own innate drive to learn. Pioneer 11 is what NASA is all about – exploration beyond the frontier." [31] Besides announcing the end of operations, the dispatch provided a historical list of Pioneer 11 mission achievements.

NASA terminated routine contact with the spacecraft on September 30, 1995, but continued to make contact for about 2 hours every 2 to 4 weeks. [30] Scientists received a few minutes of good engineering data on November 24, 1995, but then lost final contact once Earth moved out of view of the spacecraft's antenna. [3] [32] 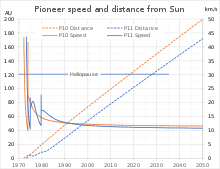 Pioneer 10 and 11 speed and distance from the Sun

Pioneer 11 has now been overtaken by the two Voyager probes launched in 1977, and Voyager 1 is now the most distant object built by humans. [37] 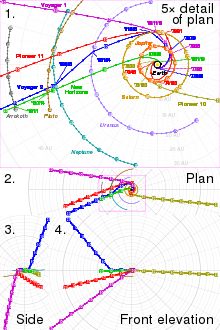 Plots of heliocentric positions of the interstellar probes (squares), and outer planets, Pluto, Arrokoth and Earth (circles) from 1972 to 2020, and launch and flyby dates by CMG Lee.
Plot 1 is a view of the solar system to scale from north perpendicular to the ecliptic with the First Point of Aries upwards; plots 2 to 4 are third-angle orthographic projections of their trajectories up to 2020 at 20% scale of plot 1.
Markers denote positions on 1 January of each year, with every fifth year labelled. Data is from COHOWeb and Horizons On-Line Ephemeris System. In the SVG file, hover over a trajectory to highlight it.

Analysis of the radio tracking data from the Pioneer 10 and 11 spacecraft at distances between 20 and 70 AU from the Sun has consistently indicated the presence of a small but anomalous Doppler frequency drift. The drift can be interpreted as due to a constant acceleration of (8.74 ± 1.33) × 10−10 m/s2 directed towards the Sun. Although it is suspected that there is a systematic origin to the effect, none was found. As a result, there is sustained interest in the nature of this so-called " Pioneer anomaly". [38] Extended analysis of mission data by Slava Turyshev and colleagues has determined the source of the anomaly to be asymmetric thermal radiation and the resulting thermal recoil force acting on the face of the Pioneers away from the Sun, [39] and in July 2012 the group of researchers published their results in the Physical Review Letters scientific journal. [40] 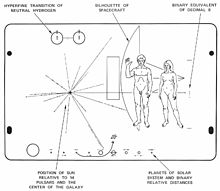 Pioneer 10 and 11 both carry a gold-anodized aluminum plaque in the event that either spacecraft is ever found by intelligent lifeforms from other planetary systems. The plaques feature the nude figures of a human male and female along with several symbols that are designed to provide information about the origin of the spacecraft. [41]

In 1991, Pioneer 11 was honored on one of 10 United States Postage Service stamps commemorating unmanned spacecraft exploring each of the then nine planets and the Moon. Pioneer 11 was the spacecraft featured with Jupiter. Pluto was listed as "Not yet explored". [42] 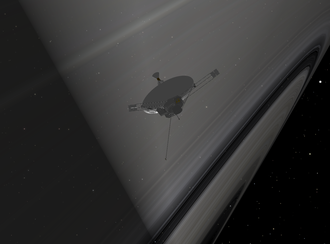 Position of Pioneer 11 as of February 8, 2012 showing spacecraft trajectory since launch (simulated view)