Partita for Violin No. 3 (Bach) 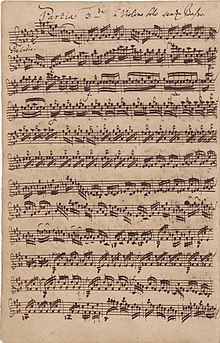 The Partita No. 3 in E major for solo violin, BWV 1006.1 (formerly 1006), [1] is the last work in Johann Sebastian Bach's set of Sonatas and Partitas. It consists of the following movements:

It takes about 15–18 minutes to perform.

Bach transcribed the Partita as a suite, cataloged as BWV 1006.2 (formerly 1006a). [2] The music critic Wilhelm Tappert claimed in 1900 that this arrangement was for lute solo, but present research[ by whom?] indicates that it was for an unspecified instrument. [3]

The Preludio consists almost entirely of semiquavers (i.e. sixteenth notes). The Preludio was also transcribed by Bach for use in two cantatas:

The "Gavotte en Rondeau" is included on the Voyager Golden Record and often heard in TV or radio programs. [4]

In 1933 Sergei Rachmaninoff transcribed for piano (and subsequently recorded) the Preludio, Gavotte, and Giga from this partita (as TN 111/1). [5] An arrangement of the Preludio for jazz trio by Jacques Loussier appeared on his Reflections of Bach album of 1987 [6] and was used as the theme of the BBC Radio 4 music quiz show Counterpoint. [7]

Wikimedia Commons has media related to BWV 1006 – Partita No. 3 in E major for violin solo.
Portal: