From Wikipedia, the free encyclopedia
Private art and design college in New York 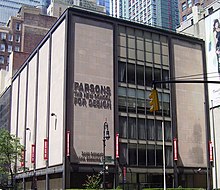 Parsons School of Design, known colloquially as Parsons, is a private art and design college located in the Greenwich Village neighborhood of Lower Manhattan in New York City. It is one of the five colleges of The New School.

The school was founded in 1896 by William Merritt Chase in search of individualistic artistic expression. It was the first of its kind in the country to offer programs in fashion design, advertising, interior design, and graphic design. The school offers undergraduate and graduate programs ranging from architectural design, curatorial studies, to textiles and design and urban ecologies. 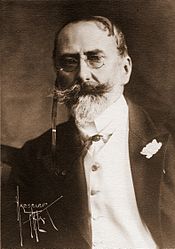 Portrait of William Merritt Chase from 1900

First established as The Chase School, the institution was founded in 1896 by the American impressionist painter William Merritt Chase (1849–1916). Chase led a small group of Progressives who seceded from the Art Students League of New York in search of a more free, more dramatic, and more individual expression of art. [6] The Chase School changed its name in 1898 to The New York School of Art.

In 1904, Frank Alvah Parsons joined artist Robert Henri as a teacher at the school. In the same approximate time frame, Parsons studied for two years with the vanguard artist and educator, Arthur Wesley Dow at Columbia University graduating in 1905 with a degree in fine arts. [7] A few years later, he became president of The New York School of Art. Anticipating a new wave of the Industrial Revolution, Parsons predicted that art and design would soon be inexorably linked to the engines of industry. His vision was borne out in a series of firsts for the school, establishing the first program in fashion design, interior design, advertising, and graphic design in the United States. [8] In 1909, the school was renamed The New York School of Fine and Applied Art to reflect these offerings. Parsons became the sole director in 1911, a position which he maintained to his death in 1930. William M. Odom, who established the school's Paris ateliers in 1921, succeeded Parsons as president. In honor of Parsons, who was important in steering the school's development and in shaping visual-arts education through his theories about linking art and industry throughout the world, the institution became the Parsons School of Design in 1941. [8]

As the modern curriculum developed, many successful designers remained closely tied to the school, and by the mid-1960s, Parsons had become "the training ground for Seventh Avenue." [8]

In 1970, the school became a division of the New School for Social Research, which later evolved into The New School. The campus moved from Sutton Place to Greenwich Village in 1972. [8] The merger with a vigorous, fully accredited university was a source of new funding and energy, which expanded the focus of a Parsons education.[ citation needed]

Like most universities in New York City, Parsons' campus is spread among scattered buildings, but the main building is located at 13th Street and 5th Avenue. Many other facilities are in buildings shared by other colleges in The New School but the facilities below are mainly exclusive to Parsons. Parsons also has a campus abroad located in Paris’s First Arrondissement, known as Parsons Paris. 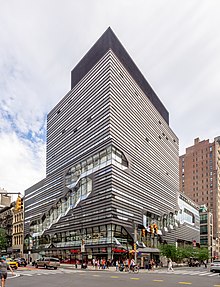 While the 65 Fifth Avenue plans were initially controversial among students and Village residents (spurring in 2009 a major student occupation was held at The New School's previous building on that site), plans for the University Center were adjusted in response to community concerns and have since been well received. In a review of the University Center's final design, The New York Times architecture critic Nicolai Ouroussoff called the building "a celebration of the cosmopolitan city".

The tower, which was designed by Skidmore, Owings and Merrill's Roger Duffy, is the biggest capital project the university has ever undertaken. The building added classrooms, new residences, computer labs, event facilities, and a cafeteria to the downtown New York City campus in addition to a two-story library and lecture halls. While the UC serves as a central hub for all university students, the majority of its classrooms and workspaces are used for Parsons programs.

2 West 13th Street/66 Fifth Avenue is most commonly known as the Sheila Johnson Design Center. The main Parsons campus is located at 2 West 13th Street in Greenwich Village in the borough of Manhattan. [9] The 12-story L-shaped building, at the corner 70 Fifth Avenue and 2W 13th street was originally built in 1914 as an office and loft building. Since its construction, it housed the national office of the National Association for the Advancement of Colored People ( NAACP) from February 1914 to June 1923. Before being acquired by The New School in 1972, it housed a multitude of union and justice organizations, such as the American Union Against Militarism (AUAM) who founded the National Civil Liberties Bureau, which later became the ACLU. The building has also housed League for Industrial Democracy, League of Nations Union, New York Teachers Union and Woman's Peace Party. With its history as a building of organizations for the advancement of justice and democracy, on May 18, 2021, the building was turned into a NYC landmark by New York City Landmarks Preservation Commission (LPC). [10]

The renovation of the existing structure's first and mezzanine levels was made possible in part by a $7 million gift from New School Trustee and Parsons Board of Governors Chair Sheila Johnson. The "Urban Quad" (as the school calls it) was designed by Lyn Rice Architects and encompasses a total area of 32,800 square feet (3,050 m2). In addition to classrooms, the building includes the Anna-Maria and Stephen Kellen Gallery and Auditorium, and the Arnold and Sheila Aronson Galleries. [11] The renovated ground floor also provides a new home for the Anna-Maria and Stephen Kellen Archives, a collection of drawings, photographs, letters, and objects documenting 20th-century design.

Until its move to the new University Center, the building hosted the Adam and Sophie Gimbel Design Library, a resource collection supporting art, architecture and design degree programs offered by the Parsons School of Design. The collection consists of approximately 45,000 book volumes, 350 periodical titles (200 current), 70,000 slides and 45,000 picture files. Special collections holdings number over 4,000, including many rare and valuable items. [12]

On Monday, April 2, 2018, the 2 West 13th Street building was affected by an electrical fire, which erupted in the basement at around 10:40 AM. The building was quickly and safely evacuated thanks to the teamwork of all students, faculty, and staff, and the building remained closed for the remainder of the Spring 2018 semester. The 375 courses usually located within the building were relocated to other buildings in the university. The cause of the fire is water which leaked through the basement ceiling onto electrical switchgear, causing circuit breakers to explode. [14]

The Parsons East Building, located at 25 East 13th Street building is home to the School of Constructed Environments, which houses the Interior Design, Lighting Design, and Architecture and Product Design departments of the college. The Fine Arts department is also located in this building. The facilities included in the building are the digital and traditional fabrication shops, the Laser Cutting lab, the Light Lab, multiple Computing Labs, the Angelo Donghia Materials Center, the Healthy Materials Library, and The Design Workshop. [15]

The 16th Street building, known as the Vera List Center, features dedicated floors to design studies and development.[ clarification needed] Both the 6th and 12th floors are dedicated to the Design & Technology Bachelor and Master programs. The building also features a library.[ citation needed]

Parsons offers twenty-five different programs each housed in one of five divisions: [16]

Parsons has an enrollment of approximately 3,800 undergraduate students and 400 graduate students. The student body is 77% women and 23% men, with most of the constituents being full-time students. [18] About one third of the college is made up of international students hailing from 68 different countries. The largest international groups come from Asia, followed by Europe. [19]

In 1920, Parsons School of Design was the first art and design school in America to found a campus abroad. [19]

Director of the New York School of Fine and Applied Art, Frank Alvah Parsons, first began a program in Paris in 1921. [21] The following year, the school made its home on the oldest planned square in Paris, the Place des Vosges. Parsons stated: "France, more than any country, has been the center of artistic inspiration since the sixteenth century… The value of associating with, and working from, the finest examples of the periods in decorative art, the adaptation of which is our national problem, needs no comment." [22] The school offered courses in architecture, interior decoration, stage design, and costume design, adding poster and graphic design a year later. Among its supporters were interior decorator Elsie de Wolfe and author and interior designer Edith Wharton.

In 1931, interior designer Jean-Michel Frank led a group of students at the Paris Ateliers to create an icon of modern design, the Parsons Table. [23] After teaching advertising, illustration, and stage and costume design, Van Day Truex became director of the Paris Ateliers in 1934. An influential voice of 20th-century American design, Truex later became the design director of Tiffany & Company, where he developed the firm's signature interiors and graphics. Guest critics at the Paris Ateliers during this period include fashion designers Jeanne Lanvin, Elsa Schiaparelli, and Jean Patou.

After closing before the onset of World War II in 1939, Parsons restarted its activities in Paris in 1948 offering a summer course combining travel and study. What was now Parsons School of Design reopened the School (at first with a summer abroad program in the late 1970s); it became known as Parsons Paris. In 1980, Parsons expanded its Paris program, entering into an educational partnership with the American College in Paris (now American University in Paris), to offer Bachelor of Fine Arts and study-abroad options. Beginning in 1986, students matriculating in the Parsons Paris program were eligible to receive a degree from Parsons School of Design.

In 2008, when the contract between Parsons School of Design and Parsons Paris expired, the former decided not to renew it. At the expiration of the agreement, Parsons notified the Paris school that it could not continue to use the "Parsons" name any longer. The Paris school challenged that decision and brought the legal proceeding before the International Chamber of Commerce who ruled in favor of Parsons School of Design. [24] That institution, now called the Paris College of Art, is no longer affiliated with The New School.

In November 2012, The New School President David E. Van Zandt announced that Parsons School of Design would be opening a new academic center, to be called Parsons Paris, in Paris in the autumn 2013. [25] Located in Paris’s First Arrondissement, Parsons Paris incorporates a faculty of French and European design educators as well as visiting professors from around the world. The school offers a variety of bachelor's and master's degrees in design, fashion, curatorial studies and business. All classes are taught in English. [26]

The school has been the choice of notable students such as Bella Hadid, Nicky Hilton Rothschild, Sailor Brinkley Cook (daughter of Christie Brinkley), Andrew McPhee, Massimo A. Pellegrini, Alexandra von Fürstenberg [27] among others.

The Student Development and Activities is home to over 25 recognized student organizations throughout The New School that serves Parsons as well as all the other five schools that are under the umbrella of The New School. [28]

WNSR is a student-run, faculty-advised online-only university radio station based at The New School. Programming is delivered in the form of streamable mp3s and, in the near future, subscribable podcasts. It is a station for all divisions of The New School. [34]