From Wikipedia, the free encyclopedia
Classifications of architecture

The complete list of the 40 architectural style codes in the National Register Information System—NRIS follows: [1]

Federal architecture was the classicizing architecture style built in the newly founded United States between c. 1780 and 1830. Examples include: the Old Town Hall in Massachusetts, and Plumb House in Virginia. 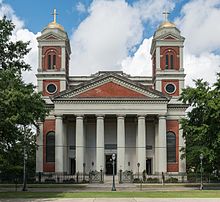 Greek Revival architecture is a Neoclassical movement of the late 18th and early 19th centuries in Europe. It emerged in the U.S. following the War of 1812 and while a revolutionary war in Greece attracted America's interest. Greek Revival architecture was popularized by Minard Lafever's pattern books: The Young Builders' General Instructor in 1829, the Modern Builders' Guide in 1833, The Beauties of Modern Architecture in 1835, and The Architectural Instructor in 1850.

Many plantation houses in the Southern United States were built in Greek Revival variations, including Millford Plantation, Melrose, Gaineswood, and Annandale Plantation

Examples of the American revival of classical Palladian architecture include: The Rotunda by Thomas Jefferson at the University of Virginia, and the Hammond-Harwood House in Annapolis, Maryland.

For examples, see Category: Victorian architecture in the United States. 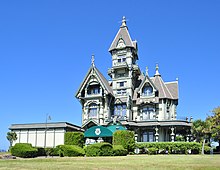 Late Victorian architecture is widely distributed on the register's listings, for many building types in every state. The Carpenter Gothic style was popular for Late Victorian wooden churches.

The Queen Anne style was popular in later American Victorian architecture, after the earlier Italianate style, and is frequent on NRHP residential listings. The Shingle Style is an American variation of Queen Anne.

For examples, see Category: Revival architecture in the United States.

A grouping of historicist architecture Revival styles, with the title Late 19th and 20th Century Revivals, has been applied by the NRHP for many listings. There are numerous listed buildings designed in an amalgam of several to many revival styles that defy a singular or simpler classification title.

Mission/Spanish Revival is an amalgam of two distinct styles popular in different but adjacent eras: the primarily late-19th-century Mission Revival Style architecture and early-20th-century (and later) Spanish Colonial Revival architecture. The combined term, or the individual terms, are often used in the style classifications of NRHP listed buildings. [1]

Examples include the Institute of American Indian Arts, La Fonda on the Plaza, and the Mabel Dodge Luhan House in New Mexico, and the Painted Desert Inn in Arizona.

Examples in California include Grauman's Chinese Theatre and Egyptian Theatre in Hollywood, the Citadel Outlets in Commerce near Los Angeles, and the Rosicrucian Egyptian Museum in San Jose.

The Mayan Revival architecture style frequently blends Maya architectural and artistic motifs with those of other Mesoamerican cultures, particularly of Aztec architecture.

Examples include: the Mayan Theater in Downtown Los Angeles; the Hollyhock House by Frank Lloyd Wright in East Hollywood; and the Aztec Hotel on historic U.S. Route 66 in Southern California.

"Postmedieval English" architecture is a style term used for a number of NRHP listings, including William Ward Jr. House in Middlefield, Connecticut.

"Late 19th and Early 20th Century American Movements" are revival styles and other American architectural movements, that originated during increasing development in the United States during the Second Industrial Revolution of the late 19th century, and continuing development and urbanization during the early 20th century before World War I.

'American Movements' is a broader design and art movement phrase used in the visual arts of the United States. It refers to U.S. centric art and design movements that originated during any century of the country's history.

Bungalow/Craftsman is a term commonly appearing in NRHP listings, which reflects American Craftsman and Bungalow styles.

American Craftsman is often a term used for the Arts and Crafts movement works and philosophy expressed in the United States. It can include domestic architecture, interior design, landscape design, applied arts, decorative arts, and the fine arts. Many Craftsman and other style influenced California bungalow houses were popular and built nationwide into the 1930s.

Very large and well detailed custom residences are described as ultimate bungalows, such as the works by Greene and Greene in California. Examples include: the Gamble House in Pasadena, and the Thorsen House in Berkeley. Smaller American Craftsman homes include: Batchelder House and Holmes-Shannon House. Bungalow examples include the Birthplace of Richard Nixon and the Lanterman House. Bungalow courts include: Palmetto Court and Gartz Court.

There are hundreds of National Register-listed buildings of the Early Commercial architecture type. [1]

The style may be a subtype/predecessor of the full Chicago School style architecture.[ citation needed]