From Wikipedia, the free encyclopedia
For other uses, see Murat Pasha.
Place in Antalya, Turkey

Muratpaşa is a district in Antalya, Turkey. The district has a coastline of 20 km (12 mi). Mediterranean Sea is in south of district. Ümit Uysal is the mayor of Muratpaşa. [3] 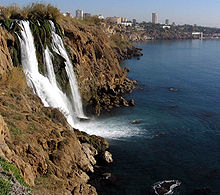 Modern day district of Muratpaşa is home to Kaleiçi, the historic center founded by Attalus II, King of Pergamon around 150 BC. Since then, the district has been under Lydian, Roman, Persian, Byzantine, Seljuk, Cypriot, Teke, Ottoman, and —after the Italian occupation— Turkish rule. [4]