From Wikipedia, the free encyclopedia
For other uses, see Moth (disambiguation).
Group of mostly-nocturnal insects in the order Lepidoptera

Moths are a paraphyletic group of insects that includes all members of the order Lepidoptera that are not butterflies, with moths making up the vast majority of the order. There are thought to be approximately 160,000 species of moth, [1] many of which have yet to be described. Most species of moth are nocturnal, but there are also crepuscular and diurnal species.

Differences between butterflies and moths 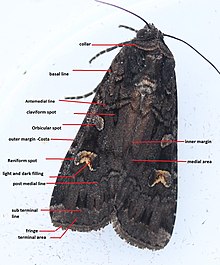 While the butterflies form a monophyletic group, the moths, comprising the rest of the Lepidoptera, do not. Many attempts have been made to group the superfamilies of the Lepidoptera into natural groups, most of which fail because one of the two groups is not monophyletic: Microlepidoptera and Macrolepidoptera, Heterocera and Rhopalocera, Jugatae and Frenatae, Monotrysia and Ditrysia. [2]

Although the rules for distinguishing moths from butterflies are not well established, one very good guiding principle is that butterflies have thin antennae and (with the exception of the family Hedylidae) have small balls or clubs at the end of their antennae. Moth antennae are usually feathery with no ball on the end. The divisions are named by this principle: "club-antennae" (Rhopalocera) or "varied-antennae" (Heterocera). Lepidoptera differs between butterflies and other organisms due to evolving a special characteristic of having the tube-like proboscis in the Middle Triassic which allowed them to acquire nectar from flowering plants. [3]

The modern English word "moth" comes from Old English "moððe" (cf. Northumbrian "mohðe") from Common Germanic (compare Old Norse "motti", Dutch "mot", and German "Motte" all meaning "moth"). Its origins are possibly related to the Old English "maða" meaning " maggot" or from the root of " midge" which until the 16th century was used mostly to indicate the larva, usually in reference to devouring clothes. 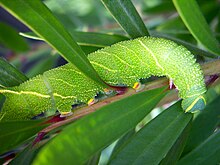 Moth larvae, or caterpillars, make cocoons from which they emerge as fully grown moths with wings. Some moth caterpillars dig holes in the ground, where they live until they are ready to turn into adult moths. [4]

Moths evolved long before butterflies; moth fossils have been found that may be 190 million years old. Both types of Lepidoptera are thought to have co-evolved with flowering plants, mainly because most modern species, both as adults and larvae, feed on flowering plants. One of the earliest known species that is thought to be an ancestor of moths is Archaeolepis mane. Its fossil fragments show scaled wings that are similar to caddisflies in their veining. [5] 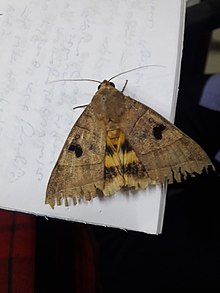 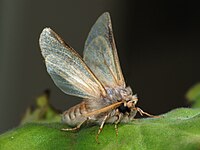 An adult male pine processionary moth ( Thaumetopoea pityocampa). This species is a serious forest pest when in its larval state. Notice the bristle springing from the underside of the hindwing ( frenulum) and running forward to be held in a small catch of the forewing, whose function is to link the wings together.

Some moths, particularly their caterpillars, can be major agricultural pests in many parts of the world. Examples include corn borers and bollworms. [6] The caterpillar of the gypsy moth (Lymantria dispar) causes severe damage to forests in the northeastern United States, where it is an invasive species. In temperate climates, the codling moth causes extensive damage, especially to fruit farms. In tropical and subtropical climates, the diamondback moth ( Plutella xylostella) is perhaps the most serious pest of brassicaceous crops. Also in sub-Saharan Africa, the African sugarcane borer is a major pest of sugarcane, maize, and sorghum. [7]

Several moths in the family Tineidae are commonly regarded as pests because their larvae eat fabric such as clothes and blankets made from natural proteinaceous fibers such as wool or silk. [8] They are less likely to eat mixed materials containing some artificial fibers. There are some reports that they may be repelled by the scent of wood from juniper and cedar, by lavender, or by other natural oils; however, many consider this unlikely to prevent infestation. Naphthalene (the chemical used in mothballs) is considered more effective, but there are concerns over its effects on human health.

Moth larvae may be killed by freezing the items which they infest for several days at a temperature below −8 °C (18 °F). [9]

While moths are notorious for eating clothing, most species do not, and some moth adults do not even eat at all. Some, like the Luna, Polyphemus, Atlas, Promethea, cecropia, and other large moths do not have mouth parts. This is possible because they live off the food stores from when they were a caterpillar, and only live a short time as an adult (roughly a week for some species). [10] Many species of adult moths do however eat: for instance, many will drink nectar. [8]

Some moths are farmed for their economic value. The most notable of these is the silkworm, the larva of the domesticated moth Bombyx mori. It is farmed for the silk with which it builds its cocoon. As of 2002 [update], the silk industry produces more than 130 million kilograms of raw silk, worth about 250 million U.S. dollars, each year. [11] [12] [13]

The larvae of many species are used as food, particularly in Africa, where they are an important source of nutrition. The mopane worm, the caterpillar of Gonimbrasia belina, from the family Saturniidae, is a significant food resource in southern Africa. Another saturniid used as food is the cavorting emperor ( Usta terpsichore). In one country alone, Congo, more than 30 species of moth larvae are harvested. Some are sold not only in the local village markets, but are shipped by the ton from one country to another. [14]

Nocturnal insectivores often feed on moths; these include some bats, some species of owls and other species of birds. Moths also are eaten by some species of lizards, amphibians, cats, dogs, rodents, and some bears. Moth larvae are vulnerable to being parasitized by Ichneumonidae.

Baculoviruses are parasite double-stranded DNA insect viruses that are used mostly as biological control agents. They are members of the Baculoviridae, a family that is restricted to insects. Most baculovirus isolates have been obtained from insects, in particular from Lepidoptera.

There is evidence that ultrasound in the range emitted by bats causes flying moths to make evasive maneuvers. Ultrasonic frequencies trigger a reflex action in the noctuid moth that causes it to drop a few centimeters or inches in its flight to evade attack, [15] and tiger moths can emit clicks to foil bats' echolocation. [16] [17]

The fungus Ophiocordyceps sinensis infects the larvae of many different species of moths. [18]

Some studies indicate that certain species of moths, such as those belonging to the families Erebidae and Sphingidae, may be the key pollinators for some flowering plants in the Himalayan ecosystem. [19] [20] A UK study published by The Royal Society in 2020 established that moths are important nocturnal pollinators of a wide range of plants. [21] [22] 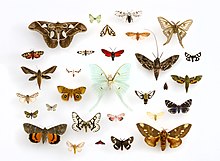 Assorted moths in the University of Texas Insect Collection

Moths frequently appear to circle artificial lights, although the reason for this behavior (positive phototaxis) is currently unknown. One hypothesis is called celestial or transverse orientation. By maintaining a constant angular relationship to a bright celestial light, such as the moon, they can fly in a straight line. Celestial objects are so far away that, even after travelling great distances, the change in angle between the moth and the light source is negligible; further, the moon will always be in the upper part of the visual field, or on the horizon. When a moth encounters a much closer artificial light and uses it for navigation, the angle changes noticeably after only a short distance, in addition to being often below the horizon. The moth instinctively attempts to correct by turning toward the light, thereby causing airborne moths to come plummeting downward, and resulting in a spiral flight path that gets closer and closer to the light source. [23]

Studies have found that light pollution caused by increasing use of artificial lights has either led to a severe decline in moth population in some parts of the world [24] [25] [26] or has severely disrupted nocturnal pollination. [27] [28]