From Wikipedia, the free encyclopedia
Local set of atmospheric conditions that differ significantly from the surrounding area
For the viticultural use of the term microclimate, see Regional climate levels in viticulture. 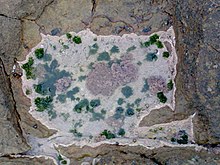 A microclimate (or micro-climate) is a local set of atmospheric conditions that differ from those in the surrounding areas, often slightly but sometimes substantially. The term may refer to areas as small as a few square meters or smaller (for example a garden bed, underneath a rock, or a cave) or as large as many square kilometers. Because climate is statistical, which implies spatial and temporal variation of the mean values of the describing parameters, within a region there can occur and persist over time sets of statistically distinct conditions, that is, microclimates. Microclimates can be found in most places but are most pronounced in topographically dynamic zones such as mountainous areas, islands, and coastal areas. [1]

Microclimates exist, for example, near bodies of water which may cool the local atmosphere, or in heavy urban areas where brick, concrete, and asphalt absorb the sun's energy, heat up, and re-radiate that heat to the ambient air: the resulting urban heat island (UHI) is a kind of microclimate that is additionally driven by relative paucity of vegetation. [2]

Tree ferns thrive in a protected dell area in the Lost Gardens of Heligan, in Cornwall, England, latitude 50° 15'N.

The terminology "micro-climate" first appeared in the 1950s in publications such as Climates in Miniature: A Study of Micro-Climate Environment (Thomas Bedford Franklin, 1955). [3]

The area in a developed industrial park may vary greatly from a wooded park nearby, as natural flora in parks absorb light and heat in leaves that a building roof or parking lot just radiates back into the air. Advocates of solar energy argue that widespread use of solar collection can mitigate overheating of urban environments by absorbing sunlight and putting it to work instead of heating the foreign surface objects. [4]

A microclimate can offer an opportunity as a small growing region for crops that cannot thrive in the broader area; this concept is often used in permaculture practiced in northern temperate climates. Microclimates can be used to the advantage of gardeners who carefully choose and position their plants. Cities often raise the average temperature by zoning, and a sheltered position can reduce the severity of winter. Roof gardening, however, exposes plants to more extreme temperatures in both summer and winter.

Microclimates can also refer to purpose-made environments, such as those in a room or other enclosure. [5] Microclimates are commonly created and carefully maintained in museum display and storage environments. This can be done using passive methods, such as silica gel, or with active microclimate control devices.

Usually, if the inland areas have a humid continental climate, the coastal areas stay much milder during winter months, in contrast to the hotter summers. This is the case in places such as British Columbia, where Vancouver has an oceanic wet winter with rare frosts, but inland areas that average several degrees warmer in summer have cold and snowy winters.

Sources and influences on microclimate

Examples of the cold air pool (CAP) effect are Gstettneralm Sinkhole in Austria (lowest recorded temperature −53 °C (−63 °F)) [6] and Peter Sinks in the US. The main criterion on the wind speed

in order to create a warm air flow penetration into a CAP is the following:

is the Froude number,

— depth of the valley, and

The presence of permafrost close to the surface in a crater creates a unique microclimate environment. [8]

Caves are important geologic formations that can house unique and delicate geologic/biological environments. The vast majority of caves found are made of calcium carbonates such as limestone(see Cave and Limestone). In these dissolution environments, many species of flora and fauna find home. The mixture of water content within the cave atmosphere, air pressure, geochemistry of the cave rock as well as the waste product from these species can combine to make unique microclimates within cave systems. [9]

The speleogenetic effect is an observed and studied process of air circulation within cave environments brought on by convection. In phreatic conditions the cave surfaces are exposed to the enclosed air(as opposed to submerged and interacting with water from the water table in vadose conditions). This air circulates water particles that condense on cave walls and formations such as speleothems. This condensing water has been found to contribute to cave wall erosion and the formation of morphological features. Some examples of this can be found in the limestone walls of Grotta Giusti; a thermal cave near Monsummano, Lucca, Italy. Any process that leads to an increase or decrease in chemical/physical processes will subsequently impact the environment within that system. Air density within caves, which directly relates to the convection processes, is determined by the air temperature, humidity, and pressure. In enclosed cave environments, the introduction of bacteria, algae, plants, animals, or human interference can change any one of these factors therefore altering the microenvironment within the cave. [10] There are over 750 caves worldwide that are available for people to visit. The constant human traffic through these cave environments can have a negative effect on the microclimates as well as on the geological and archeological findings. Factors that play into the deterioration of these environments include nearby deforestation, agriculture operations, water exploitation, mining, and tourist operations. [11]

The speleogenetic effect of normal caves tends to show a slow circulation of air. In unique conditions where acids are present, the effects of erosion and changes to the microenvironment can be drastically enhanced. One example is the effect of the presence of hydrosulfuric acid(H2S). When the oxidized hydrosulfuric acid chemically alters to sulfuric acid(H2SO4), this acid starts to react with the calcium carbonate rock at much higher rates. The water involved in this reaction tends to have a high pH of 3 which renders the water almost unlivable for many bacteria and algae. An example of this can be found in the Grotta Grande del Vento cave in Ancona, Italy. [12]

As pointed out by Rudolf Geiger in his book [13] not only climate influences the living plant but the opposite effect of the interaction of plants on their environment can also take place, and is known as plant climate. This effect has important consequences for forests in the midst of a continent; indeed, if forests were not creating their own clouds and water cycle with their efficient evapotranspiration activity, there would be no forest far away from coasts, [14] as statistically, without any other influence, rainfall occurrence would decrease from the coast towards inland. Planting trees to fight drought has also been proposed in the context of afforestation. [15]

Artificial reservoirs as well as natural ones create microclimates and often influence the macroscopic climate as well.

Another contributing factor of microclimate is the slope or aspect of an area. South-facing slopes in the Northern Hemisphere and north-facing slopes in the Southern Hemisphere are exposed to more direct sunlight than opposite slopes and are therefore warmer for longer periods of time, giving the slope a warmer microclimate than the areas around the slope. The lowest area of a glen may sometimes frost sooner or harder than a nearby spot uphill, because cold air sinks, a drying breeze may not reach the lowest bottom, and humidity lingers and precipitates, then freezes.

The type of soil found in an area can also affect microclimates. For example, soils heavy in clay can act like pavement, moderating the near ground temperature. On the other hand, if soil has many air pockets, then the heat could be trapped underneath the topsoil, resulting in the increased possibility of frost at ground level. [16]

Cities and regions known for microclimates