Mersin is a popular Mediterranean destination for local tourists

Mersin Province ( Turkish: Mersin ili), formerly İçel Province ( Turkish: İçel ili), is a province in southern Turkey, on the Mediterranean coast between Antalya and Adana. The provincial capital and the biggest city in the province is Mersin, which is composed of four municipalities and district governorates: Akdeniz, Mezitli, Toroslar and Yenişehir. Next largest is Tarsus, the birthplace of Paul the Apostle. The province is considered to be a part of the geographical, economical and cultural region of Çukurova, which covers the provinces of Mersin, Adana, Osmaniye and Hatay.

The capital of the province is the city of Mersin.

The province is named after its biggest city Mersin. Mersin was named after the aromatic plant genus Myrsine ( Greek: Μυρσίνη, Turkish: mersin) in the family Primulaceae, a myrtle that grows in abundance in the area. The 17th-century Ottoman traveler Evliya Çelebi has recorded in his Seyahatnâme that there was also a clan named Mersinoğulları in the area. [3]

Mersin from the sky

Ninth biggest province of Turkey by land area, Mersin consists %2,02 of Turkey. [4] 87% of the land area is mountain, leading up to the rocky heights of the central Taurus Mountains, the highest peak is Medetsiz (3,584 m) in the Bolkar range, and there are a number of important passes over to central Anatolia. There are many high meadows and small plains between 700 and 1500m.

The coastal strip has many large areas of flatland, formed from soil brought down by rivers and streams running off the mountains. This is fertile land, the largest area being the plain of Tarsus. The largest rivers are the Göksu and the Berdan (Göksu Calycadnus and Berdan Cydnus of antiquity), but there are many small streams running into lakes, reservoirs or the Mediterranean sea. Mersin has 321 km of coastline, much of it sandy beach. The climate is typical of the Mediterranean; very hot and very humid in summer, warm and wet in winter; the winter rains can be very heavy and flooding is a problem in many areas, but it never snows on the coast, although there is snow in the mountainous areas.

In antiquity, this coast was part of Cilicia, named for a Phoenician or Assyrian prince that had settled here. Trade from Syria and Mesopotamia over the mountains to central Anatolia passed through here, through the Cilician Gates. The geographer Strabo, described the region as being divided into "Rugged Cilicia" (Cilicia Trachea, Κιλικία Τραχεία in Greek) and "Flat Cilicia" (Cilicia Pedias, Κιλικία Πεδιάς). The capital of both sections of Cilicia was Tarsus and Mersin was its seaport.

As of 1933, there were two separate provinces, namely İçel and Mersin, on the territory of today's Mersin Province. When the Mersin Province was abolished and merged with the İçel Province, the seat of the latter was moved from Silifke to Mersin. In 2002, the province's name was changed from İçel to Mersin but the province retained the license plate number of 33, İçel having been the 33rd in the alphabetical order of Turkish province names. 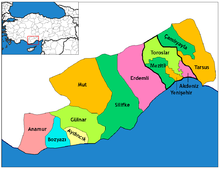 Mersin province is divided into thirteen districts four of which are actually included within the municipality of Mersin city (shown in boldface letters).

About 50% of the population of the province is younger than 24 years of age. 68% were born in Mersin. The literacy rate is 89%. About 43% of the male population and about 27% of the female population graduated from middle school. Infant mortality is 0.48%. Urban population growth rate is 2.42%. Population density is 117 as of November 2020.(In the table below, the four second-level municipalities are merged within Mersin proper.) 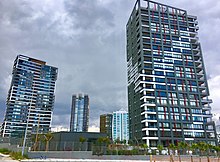 Mersin has a rapid urbanization in the recent years.

The city of Mersin is one of busiest cities in Turkey. Due to the economic activity in this part of Turkey generated by the GAP Project Mersin is Turkey's biggest Mediterranean port, and also hosts an oil refinery and a free trade zone; there are a number of factories along the road between Mersin and Adana, manufacturing glass, detergents, fertilizers and many more. With all this activity a modern city has grown with a university and other major amenities.

Mersin does not have the huge volume of tourists enjoyed by neighbouring Antalya or the Aegean coast, but Turkish people do come to this coast, especially now that the hotels have air-conditioning, and perhaps more to the mountain country behind where there are healing mineral water springs. In summer the hills are a popular retreat from the high humidity and extreme heat on the coast. West of Mersin includes bays, and little islands. Yacht touring is a tourism income in these areas.

Towns and other geographic features