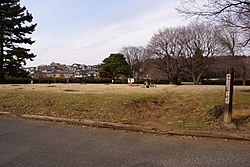 Kokubunji is located on the Musashino Terrace of western Tokyo, approximately in the geographic centre of mainland Tokyo Metropolis. The city extends for about 5.68 kilometers east-to-west by about 3.86 kilometers north-to-south.

Kokubunji has a humid subtropical climate (Köppen Cfa) characterized by warm summers and cool winters with light to no snowfall. The average annual temperature in Kokubunji is 14.0 °C. The average annual rainfall is 1647 mm, with September as the wettest month. The temperatures are highest on average in August (at around 25.5 °C) and lowest in January (at around 2.6 °C). [2]

Per Japanese census data, [3] the population of Kokubunji increased rapidly in the 1950s and 1960s.

The area of present-day Kokubunji was part of ancient Musashi Province, and was the site of the Nara period Provincial temple of that province. In the post- Meiji Restoration cadastral reform of 1878, the area became part of Kitatama District in Kanagawa Prefecture. The village of Kokubunji was created on April 1, 1889 with the establishment of the modern municipalities system. Kitatama District was transferred to the administrative control of Tokyo Metropolis on April 1, 1893. Kokubunji was elevated to town status in 1940, and to city status on November 3, 1964.

Kokubunji has a mayor-council form of government with a directly elected mayor and a unicameral city council of 22 members. Kokubunji, together with the city of Kunitachi, contributes two members to the Tokyo Metropolitan Assembly. In terms of national politics, the city is part of Tokyo 19th district of the lower house of the Diet of Japan.

Kokubunji is the home of the Hitachi Central Research Laboratory, which contains one of the largest natural preserves in the area surrounding Tokyo. [4] The Railway Technical Research Institute, the technical research company under the Japan Railways group of companies is also located in Kokubunji.

The city has one public high school, Kokubunji High School [ ja], which is operated by the Tokyo Metropolitan Government Board of Education. [5]

Tokyo Keizai University has a campus at Kokubunji.

Wikivoyage has a travel guide for Kokubunji.
Retrieved from " https://en.wikipedia.org/?title=Kokubunji,_Tokyo&oldid=1125626808"
Categories:
Hidden categories: