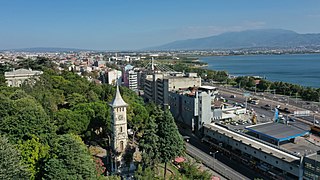 İzmit is the capital of the province of Kocaeli

Kocaeli Province ( Turkish: Kocaeli ili, pronounced  [koˈdʒaeli]) is a province of Turkey and one of only three not to have the same official name as its capital, İzmit, which is thus also sometimes called Kocaeli. The province is the successor of the Ottoman-era Sanjak of Kocaeli. The largest towns in the province are İzmit and Gebze. The traffic code is 41. The province is located at the easternmost end of the Sea of Marmara around the Gulf of İzmit. Kocaeli is bordered by the province of Istanbul and the Marmara Sea to the west, the Black Sea to the north, the province of Sakarya to the east, the province of Bursa to the south and the province of Yalova to the southwest. The metropolitan area of Istanbul extends to the Kocaeli-Istanbul provincial border. The size and natural conditions of the Bay of İzmit allow for extensive port facilities, including the Gölcük Naval Base. The province is called the industrial capital of Turkey. Kocaeli has an airport named Cengiz Topel Naval Air Station which is used for military and civilian transport. Kocaeli has two universities: Kocaeli University and Gebze Technical University.

Data taken from Kocaeli Metropolitan Municipality [2] and Central Dissemination System. [3] The information is for (xxxx-12-31). 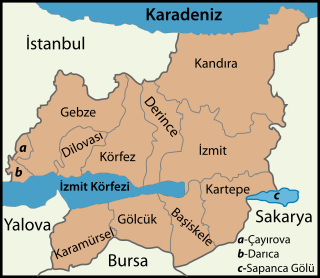 Kocaeli province is divided into 12 districts with the capital district of İzmit (in bold):