From Wikipedia, the free encyclopedia
(Redirected from Inagi, Tokyo)
City in Kantō, Japan 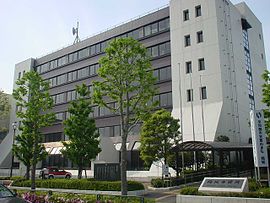 Inagi is located in the south-central portion of Tokyo Metropolis, approximately 25 kilometers from the center of Tokyo. The Tama River flows through the city, which is bordered by Kanagawa Prefecture to the south.

Per Japanese census data, [3] the population of Inagi has increased steadily since the 1950s.

The area of Inagi has been settled since the Japanese Paleolithic, or for over 20,000 years, based on projectile points, stone tools and microliths found in several locations within city borders. There is evidence of several Jomon period settlements, but settlement disappeared towards the end of the Jomon period due to climate change and eruptions of Mount Fuji. The area was sparely settled in the Yayoi period, with increasing settlement density in the Kofun period. A number of Nara period remains have been found, including the ruins of a roof tile kiln. During the Heian period, the area became part of a shōen controlled by the Oyamada clan, and later by their cadet branch, the Inabe clan into the Kamakura period, and was an area contested between competing branches of the Ashikaga clan and Uesugi clan in the Muromachi and Sengoku periods. After the start of the Edo period, the area was tenryō controlled directly by the Tokugawa shogunate. Inagi as a municipality was founded on April 1, 1889 as a village in what was then Minamitama District, Kanagawa Prefecture, from the merger of 6 pre- Meiji period hamlets with the establishment of the modern municipalities system. The district was transferred to the administrative control of Tokyo Metropolis on April 1, 1893.

Inagi has a mayor-council form of government with a directly elected mayor and a unicameral city council of 22 members. Inagi, together with the city of Tam, contributes two members to the Tokyo Metropolitan Assembly. In terms of national politics, the city is divided between the Tokyo 21st district and Tokyo 22nd district of the lower house of the Diet of Japan.

Inagi is largely a bedroom community for central Tokyo due to extensive new town public housing projects in the late 1950s, 1960s and 1970s. There is also some residual agriculture, notably pears and grapes. The paper manufacturer, Nippon Filcon is headquartered in Inagi.

The Tokyo Metropolitan Government Board of Education operates one high school:

Inagi has twelve public elementary schools and six public junior high schools operated by the Inagi City Board of Education.

There is one private junior-senior high school: