From Wikipedia, the free encyclopedia
2011–12 concert tour by Judas Priest

The Epitaph World Tour was a concert tour by English heavy metal band Judas Priest, at the time intended to be the band's farewell tour. [1] The tour commenced in June 2011 and concluded in May 2012. The tour was named after the 6th track from their Sad Wings of Destiny album.

Guitarist K. K. Downing abruptly left the band shortly before the start of the tour. He was replaced by then 31-year-old Briton, Richie Faulkner. The last date of the tour was held in an unusually small venue, London's Hammersmith Apollo. This return to Judas Priest's homeland was filmed for a live DVD. [2]

Epitaph would ultimately turn out not to be the band's final tour, as they embarked on the Redeemer of Souls Tour two years later. 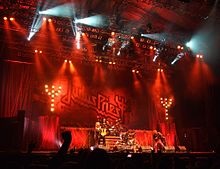 On 10 May, the band announced that preparations for the tour had begun, including rehearsals, photos, stage construction, and special effects. [3]

On 6 June, guitarist Glenn Tipton announced on his website that:

We have just finished production rehearsals for our Epitaph World Tour; the show looks great bikes, lasers, flames you name it, we've got it.

But as always, the most important thing is the music and the set list contains all the old favorites combined with songs we haven't played before live, such as "Blood Red Skies" and "Never Satisfied", and also earlier songs, including "Starbreaker" and "Night Crawler".

In addition we changed the arrangement of some songs slightly, including "Diamonds and Rust" and "Hell Bent for Leather", which i'm sure every one will enjoy.

Our first show is in Holland on June 7th at Tilburg; the band is really excited and can't wait to get back on stage. I will post regular bulletins from now and as the tour gets underway keep every body up-to-date on our progress. [4]

On the 15 September 2011 show in Brasília, Rob Halford fell off his Harley-Davidson motorcycle when he rode across the stage, only to slip off as "Hell Bent for Leather" was set to be performed. This was reminiscent of an incident that occurred on the Operation Rock & Roll tour in 1991, [5] but this time he did not sustain any major injuries. He was assisted by crew members as the intro piece began, and finished the show thereafter. [6]

According to a posting on Tipton's website on 27 January 2011, the tour will "include some classic Priest songs that we haven't played before -- and of course, the old favourites that everybody will want to hear." [7] On 15 February, the band announced they were considering playing at least one song from each of their albums as part of the setlist. [8]

The setlist for the first leg of the tour was as follows: [9]

A review of the band's performance at the Sonisphere Festival in Basel, Switzerland by RockAAA.com was favourable, praising both Rob Halford's vocal performance and Richie Faulkner's guitar playing. [10] The reviewer said that Halford's "tone is astonishing...and [his] delivery as good as there is in the business." [10]