Matsuyama is the capital and largest city of Ehime Prefecture and the largest city on Shikoku, with other major cities including Imabari, Niihama, and Saijō. [4]

Until the Meiji Restoration, Ehime Prefecture was known as Iyo Province. [5] Since before the Heian period, the area was dominated by fishermen and sailors who played an important role in defending Japan against pirates and Mongolian invasions.

After the Battle of Sekigahara, the Tokugawa shōgun gave the area to his allies, including Katō Yoshiaki who built Matsuyama Castle, forming the basis for the modern city of Matsuyama.

The name Ehime comes from the kuniumi part of the Kojiki where Iyo Province is mythologically named Ehime, "lovely princess". [6]

In 2012, a research group from the University of Tokyo and Ehime University said they had discovered rare earth deposits in Matsuyama. [7]

Located in the northwestern part of Shikoku, Ehime faces the Seto Inland Sea to the north and is bordered by Kagawa and Tokushima in the east and Kōchi in the south.

The prefecture includes both high mountains in the inland region and a long coastline, with many islands in the Seto Inland Sea. The westernmost arm of Ehime, the Sadamisaki Peninsula, is the narrowest peninsula in Japan.

See also: List of cities in Ehime Prefecture by population 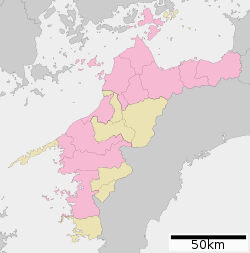 The coastal areas around Imabari and Saijō host a number of industries, including dockyards of Japan's largest shipbuilder, Imabari Shipbuilding. Chemical industries, oil refining, paper and cotton textile products also are a feature of the prefecture. Rural areas mostly engage in agricultural and fishing industries, and are particularly known for citrus fruits such as mikan ( mandarin orange), iyokan and cultured pearls.

The sports teams listed below are based in Ehime.

The oldest extant hot spring in Japan, Dōgo Onsen, is located in Matsuyama. It has been used for over two thousand years.

These are anime set in Ehime Prefecture.

There are festivals in Ehime Prefecture.

There are Hot Springs in Ehime Prefecture. 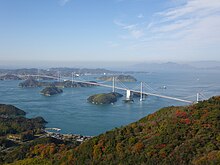 Ehime Prefecture is making use of its long tradition of involvement with people overseas through international exchanges in areas such as the economy, culture, sports and education. [9]