From Wikipedia, the free encyclopedia
Prefecture of Japan
Prefecture in Chūgoku, Japan

The area around Hiroshima was formerly divided into Bingo Province and Aki Province. [3] This location has been a center of trade and culture since the beginning of Japan's recorded history. Hiroshima is a traditional center of the Chūgoku region and was the seat of the Mōri clan until the Battle of Sekigahara.

Together with Nara and Tokyo, Hiroshima is one of the three prefectures with more than one UNESCO World Heritage site. The two such sites in Hiroshima Prefecture are: 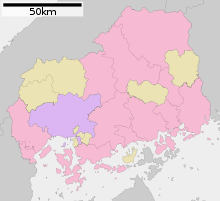 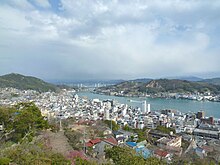 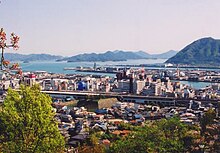 Hiroshima prefecture lies in the middle of Japan . Most of the prefecture consists of mountains leading towards Shimane Prefecture; and rivers produce rich plains near the coast.

The province faces Shikoku across the Seto Inland Sea. Hiroshima Bay opens on the Inland Sea. [4] The prefecture also includes many small islands.

As of 1 April 2014, 4% of the total land area of the prefecture was designated as Natural Parks (the lowest percentage of any prefecture), namely Setonaikai National Park; Hiba-Dōgo-Taishaku and Nishi-Chūgoku Sanchi Quasi-National Parks; and six Prefectural Natural Parks. [5]

See also: List of cities in Hiroshima Prefecture by population

Hiroshima's main industries include automobiles ( Mazda is headquartered there) and tourism in two World Heritage sites: the A-Bomb dome and Itsukushima Shrine.

Religious denominations in the Hiroshima Prefecture (1996) [9]

Similar to the rest of Japan, most people in the Hiroshima Prefecture are Shinto or Buddhist. in 1996 51.2% of the population was Buddhist, 2 were affiliated with Shinto Sects, 44.8% practiced Folk Shinto, and 2% were Christian. [9] 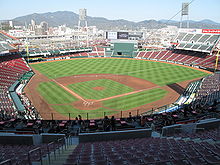 The sports teams listed below are based in Hiroshima.