The Beechcraft Bonanza is an American general aviation aircraft introduced in 1947 by Beech Aircraft Corporation of Wichita, Kansas. The six-seater, single-engined aircraft is still being produced by Beechcraft and has been in continuous production longer than any other aircraft in history. [2] [3] More than 17,000 Bonanzas of all variants have been built, [4] [5] produced in both distinctive V-tail and conventional tail configurations; early conventional-tail versions were marketed as the Debonair. [5] [6] 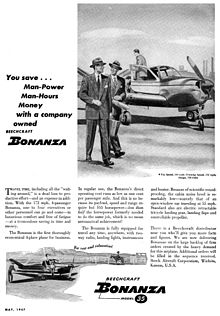 A 1947 advertisement for the first Model 35 Bonanza

At the end of World War II, two all-metal light aircraft emerged, the Model 35 Bonanza and the Cessna 195, that represented very different approaches to the premium end of the postwar civil-aviation market.[ citation needed] With its high-wing, seven-cylinder radial engine, fixed tailwheel undercarriage, and roll-down side windows, the Cessna 195 was a continuation of prewar technology. The Bonanza, however, featured an easier-to-manage, horizontally opposed, six-cylinder engine, retractable tricycle undercarriage (although the nosewheel initially was not steerable, but castering) [7][ verification needed] and low-wing configuration.

Designed by a team led by Ralph Harmon, [8] the model 35 Bonanza was a relatively fast, low-wing, all-aluminum design, at a time when most light aircraft were still made of wood and fabric.[ citation needed] The Model 35 featured retractable landing gear, and its signature V-tail (equipped with combination elevator-rudders called "ruddervators"). [9] The prototype 35 Bonanza made its first flight on December 22, 1945, with the type receiving an airworthiness certificate on March 25, 1947. [8] Production began that year. [8] The first 30–40 Bonanzas produced had fabric-covered flaps and ailerons, after which those surfaces were covered with magnesium alloy sheet. [10]

The Model 33 Debonair was introduced in 1960 as a lower-priced model with more austere standard instrumentation, exterior equipment, paint schemes, and interior fabrics and trim than the more prestigious V-tail Bonanza. [6] [13] However, most Bonanza features were available as factory options on the Debonair, and by the mid 1960s, most Debonair buyers were ordering most or all of these options. Realizing this, Beechcraft dropped the Debonair name and most of the basic and seldom-ordered standard features with the introduction of the E33 in 1968. [13]

Despite its name, the Twin Bonanza is a substantially wider and heavier aircraft that is mostly dissimilar to the single-engined Bonanza; the only major shared parts are the front fuselage sides, windows, and main cabin door. [14] However, the Twin Bonanza had trouble competing with the similarly capable but substantially lighter Cessna 310 and Piper PA-23, so Beechcraft used the basic Bonanza fuselage and many other Bonanza parts to create the twin-engined Travel Air, which was later developed into the Baron. [15]

The V-tail design gained a reputation as the "forked-tail doctor killer", [16] due to crashes by overconfident wealthy amateur pilots, [17] fatal accidents, and inflight breakups. [18] "Doctor killer" has sometimes been used to describe the conventional-tailed version, as well. [19] [20] However, a detailed analysis by the Aircraft Owners and Pilots Association of accident records for common single-engine retractable-gear airplanes in the United States between 1982 and 1989 demonstrated that the Bonanza had a slightly lower accident rate than other types in the study. Pilot error was cited in 73% of V-tail crashes and 83% of conventional-tail crashes, with aircraft-related causes accounting for 15% and 11% of crashes respectively. [21] However, the study noted that the aircraft had an unusually high incidence of gear-up landings and inadvertent landing gear retractions on the ground, which were attributed to a non-standard gear-retraction switch on early models that is easily confused with the switch that operates the flaps. Models starting in 1984 use a more distinctive relocated landing-gear switch, augmented by "squat switches" in the landing gear that prevent its operation while compressed by the aircraft's weight, and a throttle position switch that prevents gear retraction at low engine power settings. [21]

In the late 1980s, repeated V-tail structural failures prompted the United States Department of Transportation and Federal Aviation Administration (FAA) to conduct extensive wind tunnel and flight tests, which proved that the V-tail did not meet type certification standards under certain conditions; the effort culminated with the issuance of an airworthiness directive to strengthen the tail, which significantly reduced the incidence of in-flight breakups. Despite this, Beech has long contended that most V-tail failures involve operations well beyond the aircraft's intended flight envelope. [21] [12] Subsequent analysis of National Transportation Safety Board (NTSB) accident records between 1962 and 2007 revealed an average of three V-tail structural failures per year, while the conventional-tailed Bonanza 33 and 36 suffered only eleven such failures in total during the same 45 years. Most V-tail failures involved flight under visual flight rules into instrument meteorological conditions, flight into thunderstorms, or airframe icing. [22]

In addition to the structural issues, the Bonanza 35 has a relatively narrow center of gravity envelope, and the tail design is intolerant of imbalances caused by damage, improper maintenance, or repainting. Such imbalances may induce dangerous aeroelastic flutter. [21] Despite these issues, many Bonanza 35 owners insist that the aircraft is reasonably safe and its reputation has resulted in reduced purchase costs for budget-conscious buyers. [22]

In January 2012, the Australian Civil Aviation Safety Authority issued an airworthiness directive grounding all Bonanzas, Twin Bonanzas, and Debonairs equipped with a single pole-style yoke and that have forward elevator control cables that are more than 15 years old until they could be inspected. The AD was issued based on two aircraft found to have frayed cables, one of which suffered a cable failure just prior to takeoff and resulting concerns about the age of the cables in fleet aircraft of this age. At the time of the grounding, some Bonanzas had reached 64 years in service. Aircraft with frayed cables were grounded until the cables were replaced and those that passed inspection were required to have their cables replaced within 60 days regardless. The AD affected only Australian aircraft and was not adopted by the airworthiness authority responsible for the type certificate, the US Federal Aviation Administration. The FAA instead opted to issue a Special Airworthiness Information Bulletin requesting that the elevator control cables be inspected during the annual inspection. [28] [29] [30]

The QU-22 was a Beech 36/A36 Bonanza modified during the Vietnam War to be an electronic monitoring signal relay aircraft, developed under the project name "Pave Eagle" for the United States Air Force. An AiResearch turbocharged, reduction-geared Continental GTSIO-520-G engine was used to reduce its noise signature, much like the later Army-Lockheed YO-3A.[ citation needed] These aircraft were intended to be used as unmanned drones to monitor seismic and acoustic sensors dropped along the Ho Chi Minh Trail in Laos and report troop and supply movements. When the project was put into operation in 1968, however, the aircraft were all flown by pilots of the 554th Reconnaissance Squadron Detachment 1, call sign "Vampire". A separate operation "Compass Flag" monitored the General Directorate of Rear Services along the Ho Chi Minh Trail linking to the 6908th security squadron. [31]

Six YQU-22A prototypes (modifications of the Beech 33 Debonair) were combat-tested in 1968, and two were lost during operations, with a civilian test pilot killed. Twenty-seven QU-22Bs were modified, 13 in 1969 and 14 in 1970, with six lost in combat. Two Air Force pilots were killed in action. All of the losses were due to engine failures or effects of turbulence. [32] A large cowl bump above the spinner was faired-in for an AC current generator, and higher weight set of Baron wings and spars were used to handle the 236-US-gallon (890 L) fuel load. [31] 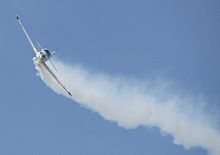 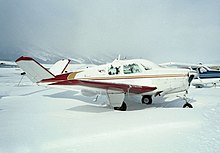 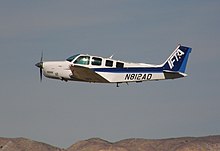 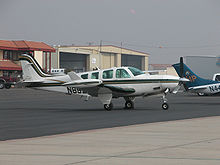 Beechcraft A36 Bonanza modified with the Tradewind Turbine's turboprop conversion

Allison Turbine Bonanza
Allison, in conjunction with Soloy Aviation Solutions, certified a conversion of Beech A36 Bonanza aircraft to be powered by an Allison 250-B17C turboprop engine. [53]
Continental Voyager Bonanza (A36)
Standard aircraft with a liquid-cooled Continental Motors TSIOL-550-B engine. [54] [55]
Propjet Bonanza (A36)
standard aircraft modified by Tradewind Turbines with an Allison 250-B17F/2 turboprop engine (Original STC # 3523NM by Soloy). [56]
TurbineAir Bonanza (B36TC)
Modification by Rocket Engineering subsidiary West Pacific Air, LLC with a 500 hp Pratt & Whitney PT6A-21 turboprop engine and 124 U.S. gallons (470 L; 103 imp gal) fuel capacity. [57] [58] [59] [60]
Whirlwind System II Turbonormalized Bonanza (36, A36, G36)
standard aircraft modified by Tornado Alley Turbo with a Tornado Alley Turbonormalizing (keeps power up to 20,000ft) [61] system and approved for a 4000 lb MTOW
Whirlwind TCP Bonanza (A36TC or B36TC)
standard aircraft modified by Tornado Alley Turbo with a TCM IO-550B engine and Tornado Alley Turbonormalizing system, this airframe is approved for a 4042 lb MTOW.
Bay Super V
A multi-engine conversion of the C35 Bonanza.
Model 40
The Beechcraft Model 40A was an experimental twin-engined aircraft based on the Bonanza. Only one prototype was built in 1948. It featured a unique over/under arrangement of two 180-hp Franklin engines mounted on top of each other and driving a single propeller. The plane had a different engine cowl from a standard Bonanza, and the nose gear could not fully retract, but otherwise it greatly resembled the production Bonanzas of the time. Certification rules demanded a firewall be fitted between the two engines, however, thus stopping development. [62] The status of the prototype is unknown.
Parastu 14
This is the standard F33 (1970) variant of the Bonanza which has been reverse engineered by Defense Industries Organization of Iran and is being manufactured without a license. [63] [64]

Astronaut Gordon Cooper, of Gemini V, poses on the wing of his personal Beechcraft Bonanza in 1963.

The Bonanza is popular with air charter companies, and is operated by private individuals and companies.

There have been numerous accidents and incidents involving the Beechcraft Bonanza. Listed below are a select few of the most notable ones.