From Wikipedia, the free encyclopedia
District in Yaren, Nauru 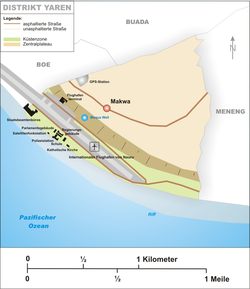 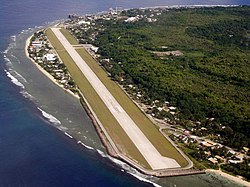 Yaren (in earlier times Makwa/Moqua), is a district of the Pacific nation of Nauru. It is the de facto capital of Nauru and is coextensive with Yaren Constituency. [1] [2]

The district was created in 1968. Its original name, Makwa (or Moqua), refers to Moqua Well, an underground lake and primary source of drinking water for Nauruan people. [3]

Yaren (and sometimes Aiwo) is usually listed as the capital of Nauru, however this is incorrect; the republic does not have cities or an official capital. Yaren is accepted by the United Nations as the "main district".

English and Nauruan, the official languages of Nauru, are spoken in the district.

The following government offices are located in this district:

Yaren also constitutes a political constituency. It returns two members to the Parliament of Nauru. [1]