Wisconsin Dells is a city in south-central Wisconsin, with a population of 2,678 people as of the 2010 census. [8] It straddles four counties: Adams, Columbia, Juneau, and Sauk. The city takes its name from the Dells of the Wisconsin River, a scenic, glacially formed gorge that features striking sandstone formations along the banks of the Wisconsin River. Together with the nearby village of Lake Delton, the city forms an area known as "the Dells", a popular Midwestern tourist destination. [9]

Early French explorers named the Dells of the Wisconsin River as dalles, a rapids or narrows on a river in voyageur French. [10]

Wisconsin Dells was founded as Kilbourn City in 1857 by Byron Kilbourn, who also founded Kilbourntown, one of the three original towns at the confluence of the Milwaukee, Menomonee, and Kinnickinnic Rivers that joined to become Milwaukee. Before the establishment of Kilbourn City, the region around the dells of the Wisconsin River was primarily a lumbering area until 1851, when the La Crosse and Milwaukee Railroad was chartered, with Kilbourn as its president. The railroad made plans to bridge the Wisconsin River near the river's dells, and a boomtown named Newport sprang up at the expected site of the bridge in 1853. The population of this new city quickly swelled to over 2,000, but when the railroad finally came through the area in 1857 it took nearly everyone by surprise by crossing the river a mile upstream from the site of Newport. As a result, Newport was rapidly turned into a ghost town as the settlers flocked to the new city at the site of the railroad bridge, Kilbourn City. The land at the point of crossing was originally owned by Parley Eaton. Byron Kilbourn bought the land from Eaton for a reduced price as everyone expected the railroad to cross at Newport. However, Kilbourn then went to Madison and lobbied the state to allow for the railroad right-of-way to be moved to cross at the point where he owned the land and greatly increased its value. Gradually, tourism became a large part of Kilbourn City. To make it easier for tourists to identify Kilbourn City with the natural landscape for which it was famous, the name of the city was changed to Wisconsin Dells in 1931. As the twentieth century progressed, new attractions began to draw even more tourists.

Because of the scenery provided by the dells of the Wisconsin River, Kilbourn City quickly became a popular travel destination in the Midwest. In 1856, Leroy Gates began taking tourists on boat tours of the Wisconsin Dells. These tours were given using wooden rowboats until 1873 when the first steamboat, the Modocawanda, was used. In 1875, early landscape photographer H. H. Bennett established a studio in the city and took many photos of the sandstone formations in the dells, INCLUDING stereoscopic views. Prints of these photographs were distributed across the United States, further enhancing the status of Kilbourn City as a destination for sightseers. Taking advantage of this, Bennett began offering to take souvenir pictures of visitors to the dells, becoming one of the first to capitalize on the area's burgeoning tourist trade. Today, the H. H. Bennett Studio is an historic site operated by the Wisconsin Historical Society.

The Dells region remained primarily a place for sightseers to escape the bustle of the city for many decades. By 1894, distillate-powered tour boats began to be used. In 1908, the Kilbourn Dam was installed by what is now Alliant Energy, over the protests of people such as H. H. Bennett, separating the Dells into the Upper and Lower Dells.

A few other events of interest took place during this time, including the June 16, 1911 impact of a 772-gram stony meteorite in rural Columbia County near the city, damaging a barn. In 1928 Mr. Clinton Berry established Berry's Dells airport. It occupied sixty acres and was designated on government maps as beacon No. 19. Berry built the airport to carry visitors to the Dells from the surrounding metropolitan areas. [11]

Lake Delton, Wisconsin Dells's sister city to the south, gradually became popular as the Dells attractions spread out. The Wonder Spot was founded in Lake Delton in 1952, and remained open until 2006. [12] In 1952, a new traveling performance from Chicago called " Tommy Bartlett's Thrill Show" came to Lake Delton on its second stop. Following the show's huge success in the city, its owner, Tommy Bartlett, chose to keep the performance permanently in Wisconsin Dells. To promote the show, Bartlett gave away bumper stickers advertising his thrill show and the city, effectively spreading word about the area across the nation. Soon more attractions followed to serve the ever-increasing tourists, along with countless hotels, shops, and restaurants.

Winnebago Indians called themselves "Hochungra," meaning "People of the Big Voice." A Siouan people, they once occupied the southern half of Wisconsin including Wisconsin Dells. Until 1993, the Ho-Chunk Nation was formerly known as the Wisconsin Winnebago Tribe, but the term Winnebago is a misnomer derived from the Algonquian language family and refers to the marsh lands of the region. Today, there are approximately 8,000 Ho-Chunk Nation citizens living in the five districts of the Ho-Chunk Nation as well as living throughout the United States and the world. The Ho-Chunk Nation is not located on a reservation or a single continuous land base in Wisconsin, but rather, the Ho-Chunk Nation owns land in 14 counties in Wisconsin, including Adams, Clark, Crawford, Dane, Eau Claire, Jackson, Juneau, La Crosse, Marathon, Monroe, Sauk, Shawano, Vernon and Wood Counties and also land in the State of Illinois.This is a result of the failed attempts from 1832-1874 to ethnically cleanse the Ho-Chunk from Wisconsin, which the Ho-Chunk thwarted by continuously returning during this process, finally exploiting the 1862 Homestead Act to purchase land in their ancestral home. This amazing strategy and resilience resulted in a new national law, the Indian Homestead Act of 1875. Today, the Ho-Chunk Nation is the largest employer in Sauk and Jackson counties. [15]

There were 1,148 households of which 27.4% had children under the age of 18 living with them, 40.9% were married couples living together, 10.3% had a female householder with no husband present, 6.3% had a male householder with no wife present, and 42.6% were non-families. 33.9% of all households were made up of individuals and 12.8% had someone living alone who was 65 years of age or older. The average household size was 2.26 and the average family size was 2.87.

There were 1,019 households out of which 26.7% had children under the age of 18 living with them, 45.5% were married couples living together, 10.2% had a female householder with no husband present, and 40.2% were non-families. 34.6% of all households were made up of individuals and 15.4% had someone living alone who was 65 years of age or older. The average household size was 2.28 and the average family size was 2.93. 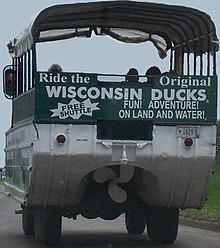 Tourism is the major contributor to the economy of Wisconsin Dells. The Dells area has many indoor and outdoor waterparks, proclaiming itself the "Waterpark Capital of the World". [9] Other attractions include boat tours, ziplining, golf courses, mini golf, go-kart tracks, water sports, horseback riding, a water ski show known as the Tommy Bartlett's Thrill Show, museums, amusement parks, and a casino. [19] Most attractions are located on the Strip, otherwise known as the Wisconsin Dells Parkway. Accommodations range from economical motels to RV parks to chain hotels to themed resorts featuring indoor and outdoor waterparks and other amenities.

Amphibious DUKW vehicles called "ducks" began offering duck tours to tourists in Wisconsin Dells in 1946. The tours visit wilderness trails, and enter nearby Lake Delton and the Wisconsin River. One company, Original Wisconsin Ducks, has more than 90 vehicles and is the largest operator of duck tours in the United States. Mayor Brian Landers stated "Many of our own residents take duck rides. I've taken duck rides myself". [20] [21]

Since the late 1970s, the Dells area (Wisconsin Dells and Lake Delton) has become a water park mecca. Noah's Ark Waterpark opened in Lake Delton in 1979, and has become the largest and the eighth most visited water park in the U.S.[ citation needed] Other outdoor amusement and water parks followed, featuring water slides, mini golf, roller coasters, go-karts, and other attractions.

The Polynesian Resort Hotel opened the United States' and the Dells area's first indoor waterpark in 1994. Since then, the number of combination resort/indoor waterparks in the Wisconsin Dells area has swelled, with each new indoor waterpark trying to have the latest innovations in waterslides and to be able to claim the title of America's largest park.

In 2005, Big Chief Karts and Coasters merged with the former Family Land Waterpark and Treasure Island Hotel to create a large theme park on the border of Lake Delton and Wisconsin Dells, with a resort called Hotel Rome, an indoor waterpark, outdoor waterpark, theme park, and the area's first indoor theme park. The park, which has roller coasters, go-karts, and water slides, is called Mt. Olympus Water & Theme Park.

The Tanger Outlet Center opened in 2006 near the Great Wolf Lodge, replacing the defunct Wisconsin Dells Greyhound Park, which opened in May 1990, but closed in 1996 due to heavy competition from the nearby Ho-Chunk Gaming Wisconsin Dells Bingo/Casino. Since Mt. Olympus opened the Parthenon Indoor Theme Park in 2006, two more indoor theme parks were constructed in the area: Knuckleheads outside the Tanger Complex in 2007, and Kalahari Resort in December 2008. New attractions being constructed include more indoor waterpark resorts, the Grand Cambrian Resort, and the Wedge Resort.

The Empire Builder, operated by Amtrak, provides daily rail service from the Wisconsin Dells Amtrak station. [27] [28] The station was built in the 1980s in the style of the original station.

Wisconsin Dells has one sister city.