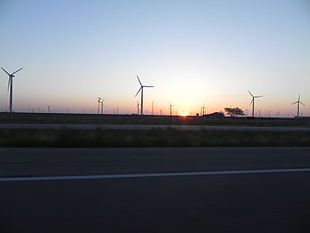 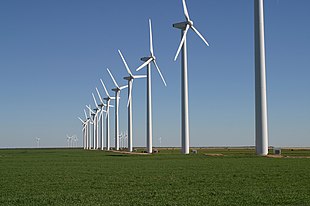 Wind power in Texas consists of over 40 wind farms, which together have a total nameplate capacity of over 28,000 MW (as of 2019). [1] [2] If Texas were a country, it would rank fifth in the world: [1] The installed wind capacity in Texas exceeds installed wind capacity in all countries but China, the United States, Germany and India. Texas produces the most wind power of any U.S. state. [1] [3] According to ERCOT (Energy Reliability Council of Texas), wind power accounted for at least 15.7% of the electricity generated in Texas during 2017, as wind was 17.4% of electricity generated in ERCOT, which manages 90% of Texas's power. [4] [5] ERCOT set a new wind output record of nearly 19.7 GW at 7:19 pm Central Standard Time on Monday, January 21, 2019. [6]

The wind resource in many parts of Texas is very large. Farmers may lease their land to wind developers, creating a new revenue stream for the farm. The wind power industry has also created over 24,000 jobs for local communities and for the state. Texas is seen as a profit-driven leader of renewable energy commercialization in the United States. The wind boom in Texas was assisted by expansion of the state’s Renewable Portfolio Standard, use of designated Competitive Renewable Energy Zones, expedited transmission construction, and the necessary Public Utility Commission rule-making. [7]

Part of the Desert Sky Wind Farm off I-10 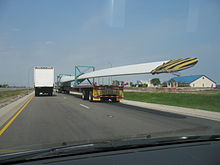 A wind turbine blade on I-35 near Elm Mott, an increasingly common sight in Texas

Wind power has a long history in Texas. West Texas A&M University began wind energy research in 1970 and led to the formation of the Alternative Energy Institute (AEI) in 1977. AEI has been a major information resource about wind energy for Texas. [8] The first 80-meter tower was erected at Big Spring, Texas in 1999. [9]

Several forces are driving the growth of wind power in Texas: favorable wind resources and land availability, State targets for renewable energy, cost efficiency of development and operation of wind farms, and a suitable electric transmission grid. The broad scope and geographical extent of wind farms in Texas is considerable: wind resource areas lie in the Texas Panhandle, along the Gulf coast south of Galveston, and in the mountain passes and ridge tops of the Trans-Pecos in the western tip of Texas. While there are over 10,700 wind turbines currently[ when?] operating in Texas to generate electricity, there are still 80,000 windmills operating in Texas for pumping water, indicating the amount of growth potential still left for wind power generation. [10]

Wind power is a for-profit enterprise between land owners and wind farm operators. Texas farmers can lease their land to wind developers for either a set rental per turbine or for a small percentage of gross annual revenue from the project. [11] This offers farmers a fresh revenue stream without impacting traditional farming and grazing practices. [12] Although leasing arrangements vary widely, the U. S. Government Accountability Office reported in 2004 that a farmer who leases land to a wind project developer can generally obtain royalties of $3,000 to $5,000 per turbine per year in lease payments. These figures are rising as larger wind turbines are being produced and installed. [13]

Wind power offers a reliability benefit in that its generation (though not its transmission) is highly decentralized. Sabotage and industrial accidents can be potential threats to the large, centrally located, power plants that provide most of Texas’ electricity. Should one of these plants be damaged, repairs could take more than a year, possibly creating power shortages on a scale that Texans have never experienced before. Coal trains and gas pipelines are also vulnerable to disruption. However, wind power plants are quickly installed and repaired. The modular structure of a wind farm also means that if one turbine is damaged, the overall output of the plant is not significantly affected. [14]

Wind is a highly variable resource. With proper understanding and planning, it can be incorporated into an electric utility's generation mix, although it clearly does not provide the sort of on-demand availability that Gas power stations provide.

Many areas in Texas have wind conditions allowing for development of wind power generation. The number of commercially attractive sites has expanded as wind turbine technology has improved and development costs continue to drop. [15] (→ Cost of electricity by source#United States) Particularly in southern Texas, the difference between land and off-shore air temperatures creates convection currents that generate significant winds during the middle of the day when electricity usage is typically at its peak level. [16] Although these winds are less than in West Texas, they occur more predictably, more in correlation with consumption, and closer to consumers. Several wind farms have been developed at the Texas coast, to a combined 3,000 MW. [17] [18]

Starting in 2008, the wind power development boom in Texas outstripped the capacity of the transmission systems in place, and predicted shortages in transmission capability could have dampened the growth of the industry. Until 2008, the growth in wind power "piggybacked" on existing lines, but had almost depleted spare capacity. [19] As a result, in winter the west Texas grid often had such a local surplus of power, that the price would fall below zero. [20] [21] According to Michael Goggin, electric industry analyst at AWEA, "Prices fell below US −$30/MWh (megawatt-hour) on 63% of days during the first half of 2008, compared to 10% for the same period in 2007 and 5% in 2006." [22]

In July 2008, utility officials gave preliminary approval to a $4.9 billion plan to build new transmission lines to carry wind-generated electricity from West Texas to urban areas such as Dallas. The new plan would be the biggest investment in renewable energy in U.S. history, and would add transmission lines capable of moving about 18,000 megawatts. [23] ERCOT curtailed wind power by 17% (3.8 TWh) in 2009, but that decreased to only 0.5% by 2014, as transmission improved, particularly the Competitive Renewable Energy Zone (CREZ) in 2013. [24] [25] [26] However the CREZ lines are sometimes maxed out, and in November 2015, prices were negative for 50 hours. Wind power in Texas receives subsidies regardless of whether power prices are positive or negative.

In areas where Smart Metering is commonly installed, [27] some utilities offer free electricity at night. [28] 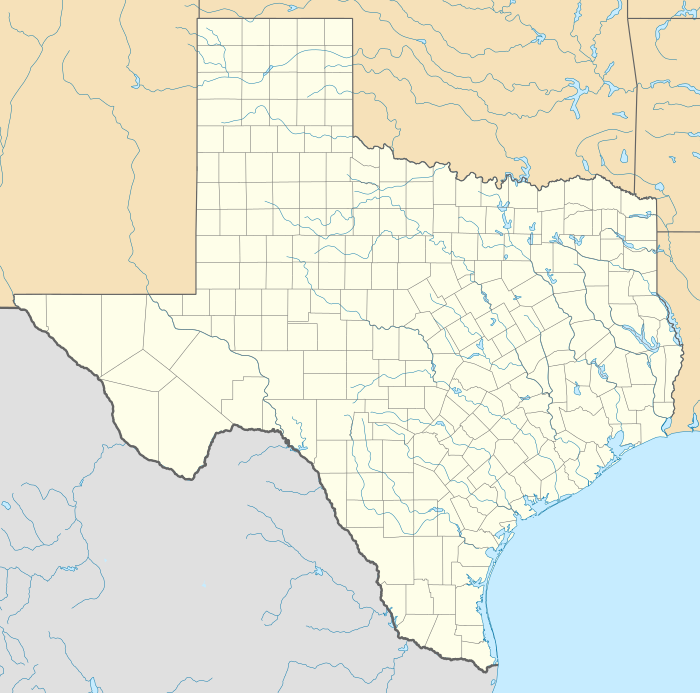 The Texas Renewable Portfolio Standard was originally created by Senate Bill 7 and signed by Governor Bush in 1999, [29] [30] [31] which helped Texas eventually become the leading producer of wind powered electricity in the U.S. [32] [33] [34] The RPS was part of new laws that restructured the electricity industry. The Texas RPS mandated that utility companies jointly create 2000 megawatts (MW) of new renewable energy by 2009 based on their market share. In 2005, Senate Bill 20, increased the state’s RPS requirement to 5,880 MW by 2015, of which, 500 MW must come from non-wind resources. The bill set a goal of 10,000 MW of renewable energy capacity for 2025, which was achieved 15 years early, in 2010. [35]

According to DSIRE.org, "In 1999 the Public Utility Commission of Texas (PUCT) adopted rules for the state's Renewable Energy Mandate, establishing a renewable portfolio standard (RPS), a renewable-energy credit (REC) trading program, and renewable-energy purchase requirements for competitive retailers in Texas. The 1999 standard called for 2,000 megawatts (MW) of new renewables to be installed in Texas by 2009, in addition to the 880 MW of existing renewables generation at the time. In August 2005, S.B. 20 increased the renewable-energy mandate to 5,880 MW by 2015 (about 5% of the state's electricity demand), including a target of 500 MW of renewable-energy capacity from resources other than wind. Wind accounts for nearly all of the current renewable-energy generation in Texas. The 2005 legislation also set a target of reaching 10,000 MW of renewable energy capacity by 2025. [35]

In 2018, wind power was the third-largest source of electricity generation in Texas. It is expected that it will surpass coal, the second-largest source, by 2020. [36]

The PUCT established a renewable-energy credit (REC) trading program that began in July 2001 and will continue through 2019. Under PUCT rules, one REC represents one megawatt-hour (MWh) of qualified renewable energy that is generated and metered in Texas. A capacity conversion factor (CCF) is used to convert MW goals into MWh requirements for each retailer in the competitive market. The CCF was originally administratively set at 35% for the first two compliance years, but is now based on the actual performance of the resources in the REC-trading program for the previous two years. For the 2010 and 2011 the CCF will be 30.5%." Each retailer in Texas is allocated a share of the mandate based on that retailer’s pro rata share of statewide retail energy sales. The program administrator maintains a REC account for program participants to track the production, sale, transfer, purchase, and retirement of RECs. Credits can be banked for three years, and all renewable additions have a minimum of 10 years of credits to recover over-market costs. An administrative penalty of $50 per MWh was established for providers that do not meet the RPS requirements.

The development of the Tres Amigas HVDC link to the Western grid and the Eastern grid will allow more flexibility in importing and exporting power to and from Texas. [39]

A 300 MW offshore wind farm is planned for Galveston, and 2,100 MW for the Gulf Coast of Texas. [40] Making turbines that are able to yaw quickly will make them more likely to be able to survive a hurricane. [41]