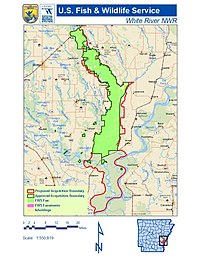 A map of White River National Wildlife Refuge, including areas proposed for expansion.

Old growth bald cypress forests are a feature of the National Wildlife Refuge.

This refuge has the largest concentration of wintering mallard ducks in the Mississippi Flyway. It also has large concentrations of snow and Canada geese. This refuge is home to four active bald eagle nests and a black bear population. Black bears have increased in numbers from about 25 in the 1940s to more than 300. [4] It is believed by some to host one of the last populations of the ivory-billed woodpecker, a bird considered extinct or nearly so.

The refuge is classified as a Wetland of International Importance. [6]

A boardwalk, here flooded, and trails give access to refuge lands to hikers and bird watchers.

In 2013, federal government designated the White River watershed as the nation's second "National Blueway". Later that year, the Fish and Wildlife Service proposed that the White River NWR be expanded. The expansion proposal calls for the refuge to be expanded from the present 160,756 acres (650.56 km2) to as much as 297,806 acres (1,205.18 km2). The expansion would be carried out by purchasing land from willing sellers as funds are available from Federal Duck Stamps, the Migratory Bird Conservation Fund, and the Land and Water Conservation Fund. [7]

The proposed expansion would add to the refuge 9 miles of White River floodplain, 26 miles of the Arkansas River, and 34 miles of the west bank of the Mississippi River. The land would provide additional habitat for a variety of birds, fishes, and other animals. [8] The expansion would also be important for the preservation and restoration of Arkansas's "Big Woods," a floodplain forest of which less than 10 percent remains intact. [9]

The Fish and Wildlife Service has also proposed expansion of the Cache River National Wildlife Refuge, which borders the White River NWR on the north. The proposed expansions, if fully implemented, would preserve almost 600,000 acres (2,400 km2) of land in the White River watershed. Additional parcels of conservation land owned by the state of Arkansas and private conservation groups are contiguous with the national wildlife refugees.

The Service is proud to recognize the many contributions Senator Bumpers has made to give many future generations the same opportunity to enjoy Arkansas' natural beauty as we have had. He is a giant among conservationists and a visionary who followed an unconventional path to set aside some of Arkansas' last wild places. It is fitting that he will be forever linked with the White River. [10]