Wheeler Army Airfield ( IATA: HHI, ICAO: PHHI, FAA LID: HHI), also known as Wheeler Field and formerly as Wheeler Air Force Base, is a United States Army post located in the City & County of Honolulu and in the Wahiawa District of the Island of O'ahu, Hawaii. [4] [5] It is a National Historic Landmark for its role in the 7 December 1941 Japanese attack on Pearl Harbor. [3]

On 6 February 1922, a detachment of 20 enlisted men from Luke Field, proceeded to Schofield Barracks, under Lieutenant William T. Agee, to clear the flying field on the grounds of the former 17th Cavalry Regiment drill grounds and construct housing for the divisional air service. Two canvas hangars were erected and the field cleared of weeds, guava and algaroba trees. Thus Wheeler Field got its modest start. It was named Wheeler Field on 11 November 1922 in honor of Major Sheldon H. Wheeler, former commander of Luke Field on Ford Island, killed in the crash of DH-4B, AAS Ser. No. 63525 on 13 July 1921. [8]

In June 1923, 13 months after the designation of the new flying field, shop hangars, airplane hangars, and oil storage tanks were erected. In 1927, one of the wooden shop hangars was remodeled to provide space for a barracks and a mess hall incident to the formation of a pursuit group. It was not until 1930 that any permanent construction was started. Many different units were originally stationed at Wheeler Field. The first units of the Schofield Barracks divisional airdrome were the 4th Observation Squadron, Photo Section No. 11 and Branch Intelligence Office No. 11.

In October 1922, the photo section and intelligence units were returned to Luke Field. The following May, the 17th Composite Group was organized at Wheeler. It consisted of a Headquarters Squadron, the 19th Pursuit Squadron and the 4th Observation Squadron. These units operated from the field until January 1924, when the 17th Group was rendered inactive. Three years later, the foundation for the present 18th Pursuit Group was laid and the 6th and 19th Pursuit Squadrons were transferred from Luke Field. More squadrons were eventually added to the 18th Pursuit Group and Bellows Field was opened as an aerial gunnery camp for the use of tactical organizations. The 15th Pursuit Group was formed next and was made a permanent part of the airdrome. Hand in hand with this move came the formation of the 14th Pursuit Wing.

Wheeler Field was the site of several major historic aviation events prior to the attack on Pearl Harbor on 7 December 1941, including the first transpacific flight from California in 1927; the great Dole Air Race from California to Hawaii; the first transpacific flight from the U.S. to Australia in 1928, and the first Hawaii-to-Mainland solo flight in 1935 by Amelia Earhart. Ms. Earhart visited Wheeler Field in 1935 in her Lockheed Vega and in 1937 in her Lockheed Model 10 Electra. Kingsford Smith, in his plane, the Southern Cross, also used the airfield on his historic flights across the Pacific.

By 1940, Wheeler Field had evolved into a primary base for Army Air Corps pursuit (i.e., "fighter") aircraft such as the P-40 Warhawk, responsible for air defense of the Hawaiian Islands Territory. 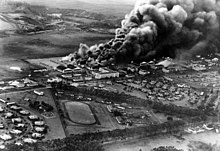 Wheeler Army Airfield was a primary target and site of the first attack on 7 December 1941, leading up to the attack on Pearl Harbor. [3] The Japanese attacked the airfield to prevent the numerous planes there from getting airborne and engaging them. Most of the planes were destroyed, but 12 pilots assigned to the 15th Pursuit Group at Wheeler (predecessor of the present day 15th Wing) succeeded in getting their P-36 Hawk and P-40 Warhawk aircraft off the ground, engaged the Japanese in furious dogfights, and scored some of the first American victories of World War II.

2nd Lieutenant Phil Rasmussen found an old, unscathed Curtiss P-36 Hawk and taxied it to a revetment where he had it loaded with ammunition. During a lull in the bombing, he took off with three other pilots. Lieutenant Rasmussen managed to shoot down a Mitsubishi A6M Zero and the American pilots subsequently engaged 11 Japanese aircraft.

The installation has a National Historic Landmark District in association with the attack on 7 December 1941. The 1941 Flightline, hangars and barracks survive today. [9]

Casualties at Wheeler totaled 33 killed and 75 wounded. Of the 233 aircraft assigned to the Hawaiian Air Force, 146 were in commission before the attack; afterward, only 83 were in commission (including 27 P-40s) and 76 had been totally destroyed. During World War II as part of the US Army Air Forces and until 1949 as part of the newly established United States Air Force, Wheeler was assigned to the Seventh Air Force (former Hawaiian Air Force) and successor commands.

With the establishment of the U.S. Air Force as a separate service in 1947, Wheeler Army Air Base was re-designated Wheeler Air Force Base under the operational control of Pacific Air Forces ( PACAF). The following year, the installation was placed on minimum caretaker status; however, with expansion of the Air Force during the Korean War, Wheeler AFB was restored to fully operational status in 1952.

On 24 February 1952, the 1508th Support Squadron was organized to provide administrative and logistical support to activities at Wheeler AFB. The unit was redesignated the 6487th Support Squadron on 1 April 1955, then inactivated on 1 November 1971, concurrent with activation of the 15th Air Base Squadron.

A subordinate unit of the 15th Air Base Wing, the 15 ABS served as the host organization at Wheeler AFB, which consisted of approximately 1,389 acres of land and facilities valued at over $37 million. Responsibilities of the 15 ABS included providing munitions service and support to all Air Force activities within the Hawaiian area, in addition to operating a small arms firing range where personnel of the Air Force, U.S. Customs and local law enforcement agencies were certified. During the 1960s, 1970s and 1980s, the installation hosted a number of Army and Air Force activities, including Army rotary-wing and fixed-wing aviation units and USAF fixed-wing air support / forward air control units flying the O-2 Skymaster and OV-10 Bronco.

In August 1987, the Secretary of the Interior designated Wheeler AFB as a National Historic Landmark, recognizing it as a site of national significance in the history of the United States and, in particular, World War II in the Pacific.

The 15th Air Base Squadron inactivated at Wheeler on 31 October 1991, one day before the U.S. Army assumed operational control of the installation in accordance with a memorandum of understanding signed by the Commander in Chief, Pacific Air Forces, and the Commander, US Army Western Command.

On 1 November 1991, the Army held a simple ceremony to signify their takeover of the base, then changed the sign at the main gate to Wheeler Army Airfield. The installation, however, remained on the real property records of the 15th Air Base Wing until 15 March 1993 when an Action Memorandum signed by the Deputy Assistant Secretary of the Air Force (Environment, Safety and Occupational Health) and the Deputy Assistant Secretary of the Army (Installations and Housing) authorized the exchange of Wheeler AFB for Fort Kamehameha Military Reservation.

Wheeler Army Airfield was constructed in the pattern of the Garden City. These type of neighborhoods are the inspiration of Sir Ebenezer Howard of England, who designed these type neighborhoods in re-action to the industrial company towns that had blighted his nation. The neighborhoods are designed in loops with ample green spaces that were to be shared in common among the residents. The homes within the loops are of the Spanish Colonial Revival style that was flourishing in the 1920s and 1930s.

Today, Wheeler Army Airfield comprises approximately 1,389 acres (5.6 km²) of land returned to the Department of the Army on 1 November 1991. As of the 2000 Census, the base had a total population of 2,829 military personnel and families.

Wheeler is directly adjacent to Schofield Barracks across Kunia Road and to Wahiawā on the central plateau of the Island of O'ahu. The U.S. postal code for Wheeler Army Airfield is 96786.

Wheeler AFB-cum-Wheeler AAF is delineated for statistical purposes as a census-designated place (CDP). At the 2010 Census, the CDP had a resident population of 1,634. [11]

There are 739 households out of which 77.9% have children under the age of 18 living with them, 89.7% are married couples living together, 6.4% have a female householder with no husband present, and 2.0% are non-families. 1.9% of all households are made up of individuals and 0.0% have someone living alone who is 65 years of age or older. The average household size is 3.36 and the average family size is 3.38.