From Wikipedia, the free encyclopedia
(Redirected from Western black widow)

Latrodectus hesperus, the western black widow spider or western widow, is a venomous spider species found in western regions of North America. The female's body is 14–16 mm (1/2 in) in length and is black, often with an hourglass-shaped red mark on the lower abdomen. This "hourglass" mark can be yellow, and on rare occasions, white. The male of the species is around half this length and generally a tan color with lighter striping on the abdomen. The population was previously described as a subspecies of Latrodectus mactans and it is closely related to the northern species Latrodectus variolus. The species, as with others of the genus, build irregular or "messy" webs: Unlike the spiral webs or the tunnel-shaped webs of other spiders, the strands of a Latrodectus web have no apparent organization.

Female black widows have potent venom containing a neurotoxin active against a range of mammals. (See latrodectism.) Symptoms are pain, nausea, goosebumps, and localized sweating. In historical literature, fatalities were reported at anywhere between 0.5% and 12% [2], but studies within the past several decades have been unable to confirm any fatalities from this or any of the other U.S. species of Latrodectus (e.g. zero fatalities among 23,409 documented Latrodectus bites from 2000 through 2008). [3] The female's consumption of the male after courtship, a cannibalistic and suicidal behavior observed in Latrodectus hasseltii (Australia's redback), [4] is rare in this species. Male western widows may breed several times during their relatively short lifespans. [5] Males are known to show preference for mating with well-fed females over starved ones, taking cues from the females' webs. [6]

Latrodectus hesperus can be found in western regions of North America. In Canada it can be found from British Columbia to Manitoba. They are most commonly found near the Canada-US border, as well less commonly throughout prairies regions of the Canadian Prairies in Western Canada. [7] [8]

The female is stimulated by contact with a male's web, and vice versa. Male and female Latrodectus hesperus produce sexually specific scents which are combined with their silk; each sex responds by initiating mating when it comes in contact with a web of the opposite sex. [9] 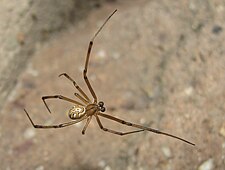 Male western black widow: This image shows the enlarged palpal organs (large dark disks) at the tip of the pedipalps and the spider's eight eyes when the image is expanded.

Latrodectus hesperus frequently hangs upside down near center of the web and waits for any insects to enter the web to attack. It bites its victim then wraps it in silk.[ citation needed]

Only female spiders have venom glands large enough for a bite to be harmful and require medical treatment.[ citation needed]