The Western Athletic Conference (WAC) is an NCAA Division I conference. The WAC covers a broad expanse of the western United States with member institutions located in Arizona, California, New Mexico, Utah and Washington along with the Midwest state of Illinois and the Southwest state of Texas.

Due to most of the conference's football-playing members leaving the WAC for other affiliations, the conference discontinued football as a sponsored sport after the 2012–13 season and left the NCAA's Football Bowl Subdivision (formerly known as Division I-A). The WAC thus became the first Division I conference to drop football since the Big West in 2000. The WAC then added men's soccer and became one of the NCAA's eleven Division I non-football conferences. [1]

The following institutions are the full members of the Western Athletic Conference.

The following 10 schools field programs in the WAC for sports not sponsored by their primary conferences.

The WAC has 29 former full members. 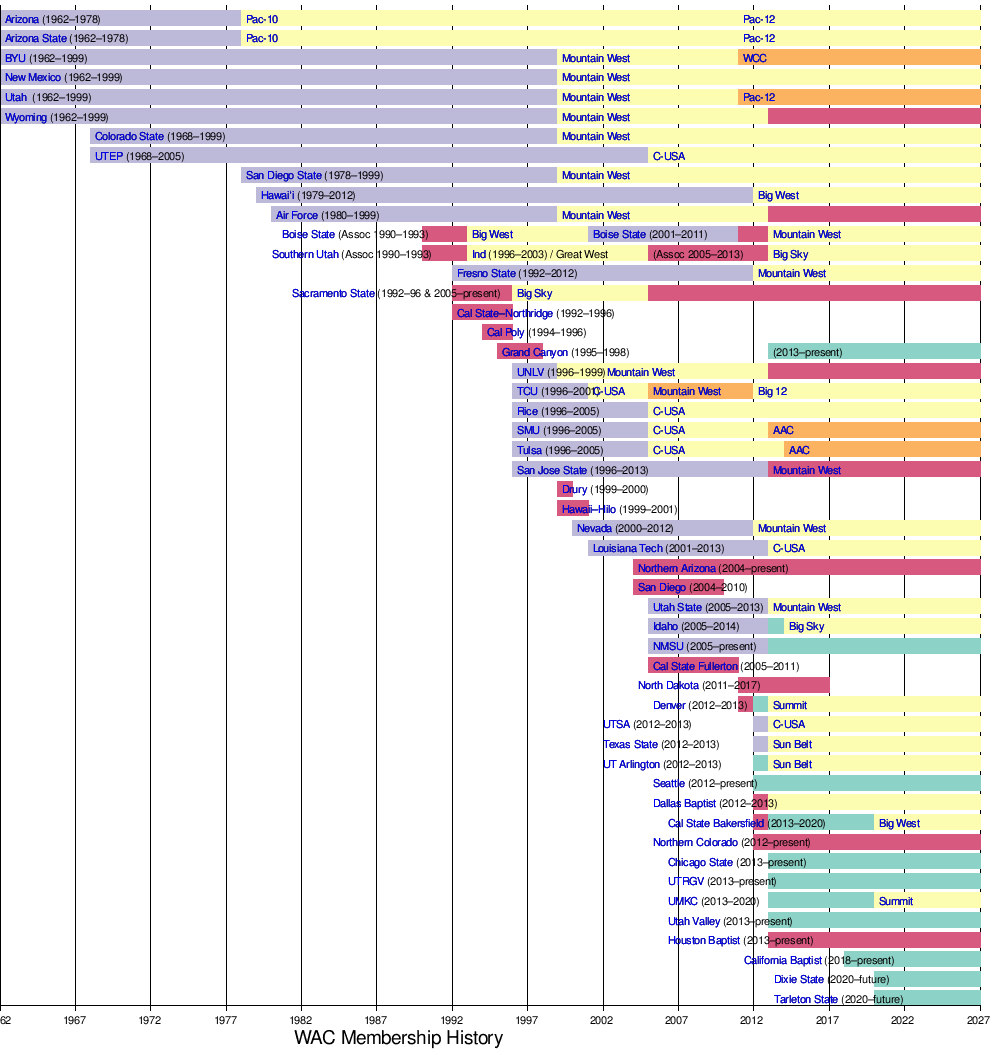 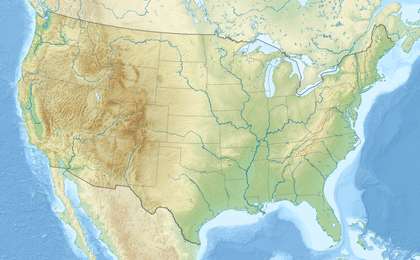 The WAC formed out of a series of talks between Brigham Young University athletic director Eddie Kimball and other university administrators from 1958 to 1961 to form a new athletic conference that would better fit the needs and situations of certain universities which were at the time members of the Border, Skyline, and Pacific Coast Conferences. Potential member universities who were represented at the meetings included BYU, Washington State, Oregon, Oregon State, Utah, New Mexico, Arizona, Arizona State, and Wyoming. While the three Washington and Oregon schools elected to stay in a revamped Pac-8 Conference that replaced the scandal-plagued PCC, the remaining six schools formed the WAC. The Border and Skyline conferences, having each lost three of their stronger members, dissolved at the end of the 1961–62 season. The charter members of the WAC were Arizona, Arizona State, BYU, New Mexico, Utah, and Wyoming. New Mexico State and Utah State applied for charter membership and were turned down; they would eventually become WAC members 43 years later.

The conference proved to be an almost perfect fit for the six schools from both a competitive and financial standpoint. Arizona and Arizona State, in particular, experienced success in baseball with Arizona garnering the 1963 College World Series (CWS) runner-up trophy and ASU winning the CWS in 1965, 1967, and 1969. Colorado State and Texas-El Paso (UTEP), at that time just renamed from Texas Western College, were accepted in September 1967 (joined in July 1968) to bring membership up to eight. [8] [9]

With massive growth in the state of Arizona, the balance of WAC play in the 1970s became increasingly skewed in favor of the Arizona schools, who won or tied for all but two WAC football titles from 1969 onward. In the summer of 1978, the two schools left the WAC for the Pac-8, which became the Pac-10, and were replaced in the WAC by San Diego State and, one year later, Hawaii. The WAC further expanded by adding Air Force in the summer of 1980. A college football national championship won by Brigham Young in 1984 added to the WAC's reputation as one of the best NCAA Division I conferences. This nine-team line-up of the WAC defined the conference for nearly 15 years.

Fresno State expanded its athletic program in the early 1990s and was granted membership in 1992 as the nationwide trend against major college programs independent of conferences accelerated. The WAC merged with the High Country Athletic Conference, a parallel organization to the WAC for women's athletics, in 1990 to unify both men's and women's athletics under one administrative structure.

In 1996, the WAC expanded again, adding six schools to its ranks for a total of sixteen. Rice, TCU, and SMU joined the league from the Southwest Conference, which had disbanded. Big West Conference members San Jose State and UNLV were also admitted, as well as Tulsa from the Missouri Valley Conference. [10] Also, two WAC members for men's sports at the time, Air Force and Hawaiʻi, brought their women's sports into the WAC. With the expansion, the WAC was divided into two divisions, the Mountain and the Pacific.

To help in organizing schedules and travel for the far-flung league, the members were divided into four quadrants of four teams each, as follows: [10]

The division champions in football met from 1996 to 1998 in the WAC Championship Game, held at Sam Boyd Stadium (also known as the Silver Bowl) in the Las Vegas Valley.

Turbulence at the turn of the millennium

Increasingly, most of the older, pre-1996 members —particularly Air Force, BYU, Colorado State, Utah, and Wyoming— felt chagrin at this new arrangement. Additional concerns centered around finances, as the expanded league stretched approximately 3,900 miles (6,300 km) from Hawaiʻi to Oklahoma and covered nine states and four time zones. With such a far-flung league, travel costs became a concern. The presidents of Air Force, BYU, Colorado State, Utah, and Wyoming met in 1998 at Denver International Airport and agreed to split off to form a new league. The breakaway group invited old-line WAC schools New Mexico and San Diego State and newcomer UNLV to join them in the new Mountain West Conference, which began competition in 1999. [10]

A USA Today article summed up the reasons behind the split. "With Hawaii and the Texas schools separated by about 3,900 miles and four time zones, travel costs were a tremendous burden for WAC teams. The costs, coupled with lagging revenue and a proposed realignment that would have separated rivals such as Colorado State and Air Force, created unrest among the eight defecting schools." [11] [12]

BYU and Utah would later leave the MWC for the West Coast Conference and Pac-12 Conference, respectively; BYU football is an FBS independent.

Nevada
Locations of WAC full members from 2005 through 2011

In 2000, the University of Nevada, Reno (Nevada) of the Big West joined as part of its plan to upgrade its athletic program.

The Big West announced that it would drop football after the 2000 season, but four of its football-playing members ( Boise State, Idaho, New Mexico State, and Utah State) were unwilling to drop football. Boise State was invited to join the WAC and promptly departed the Big West, while New Mexico State and Idaho joined the Sun Belt Conference (NMSU as a full member, Idaho as a "football only" member) and Utah State operated as an independent D-IA program. At the same time, Louisiana Tech (LA Tech) ended its independent D-IA status and also accepted an invitation to join the WAC with Boise State.

In 2005, Conference USA sought new members to replenish its ranks after losing members to the Big East, which had lost members to the ACC. Four WAC schools, former SWC schools Rice and SMU, as well as Tulsa and UTEP, joined Conference USA. In response, the WAC added Idaho, New Mexico State, and Utah State – all former Big West schools which left the conference in 2000 along with Boise State when that conference dropped football. The three new schools were all land grant universities, bringing the conference total to five (Nevada and Hawaiʻi).

Membership changes and the elimination of football

The decade of the 2010s began with a series of conference realignment moves that would have trickle-down effects throughout Division I football, and profoundly change the membership of the WAC. Boise State decided to move to the Mountain West Conference (MWC) for the 2011–12 season, [13] and to replace departing BYU, the MWC also recruited WAC members Fresno State and Nevada for 2012–13. [14] [15] WAC commissioner Karl Benson courted several schools to replace those leaving, including the University of Montana, which declined, [16] [17] as well as the University of Denver, University of Texas at San Antonio (UTSA), and Texas State University-San Marcos, which all accepted effective 2012–13. [18]

But the resulting eastward shift of the conference's geographic center led Hawaiʻi to reduce travel expenses by becoming a football-only member of the MWC and joining the California-based Big West Conference for all other sports. [19] [20] Further invitations were then issued by the WAC to Seattle University [21] and the University of Texas at Arlington. [22] These changes meant that the conference would have 10 members for 2012–13, [23] seven of which sponsored football, and Benson announced that the WAC planned to add two additional football-playing members to begin competition in 2013. [24] A further boost came when Boise State decided to join the Big East in football, and return to the WAC in most other sports, as of the 2013–14 academic year. [25] So by the end of 2011, the WAC seemed to have weathered the latest round of conference changes, and once again reinvented itself for the future.

But from this seemingly strong position, early 2012 brought forth a series of moves that shook the conference to its very core, beginning with Utah State and San Jose State accepting offers to join the MWC. [26] Four similar announcements followed with UTSA and Louisiana Tech jumping to Conference USA, plus Texas State and UT Arlington heading to the Sun Belt Conference, all as of 2013–14. [27] [28] [29] [30] [31] [32] Boise State also canceled plans to rejoin the WAC, instead opting to place its non-football sports in the Big West Conference, before eventually deciding to simply remain in the MWC. [33] [34] These changes left the WAC's viability as a Division I football conference in grave doubt. The two remaining football-playing members, New Mexico State and Idaho, began making plans to compete in future seasons as FBS Independents; [35] [36] they ultimately spent only the 2013 season as independents, rejoining their one-time football home of the Sun Belt as football-only members in 2014. [37]

In order to rebuild, as well as forestall further defections, the conference was forced to add two schools— Utah Valley University and CSU Bakersfield—which were invited in October 2012 to join the WAC in 2013–14, [38] but this did not prevent two more members from leaving. Denver decided to take most of its athletic teams to The Summit League as of the 2013–14 season, [39] shortly after Idaho opted to return all of its non-football sports to the Big Sky Conference in 2014–15. [40] The conference responded over the next two months by adding Grand Canyon University, [41] Chicago State University, [42] and the University of Texas-Pan American. [43] [44] Then, in February 2013, the WAC announced the University of Missouri–Kansas City would join in the summer of 2013 as well. [45] These changes would put the conference's membership at eight members by 2014 with only one, New Mexico State, having been in the WAC just three years earlier. Due to losing the majority of its football-playing members, the WAC would stop sponsoring the sport after the 2012–13 season, thereby becoming a non-football conference. [1]

In January 2017, California Baptist University announced it would transition from NCAA Division II and join the WAC in 2018. [46]

In November 2017, Cal State Bakersfield announced it would accept an invitation to the Big West and join its new conference in 2020.

In January 2019, Dixie State University announced it would move its athletics to Division I and join the WAC in 2020.

In June 2019, the University of Missouri–Kansas City announced it would leave the WAC to join the Summit League in 2020; [47] this announcement came shortly before the rebranding of its athletic program as the Kansas City Roos. [48]

In September 2019, Tarleton State University of Division II announced that it would move to Division I and join the WAC in 2020. [49]

The WAC sponsored football from its founding in 1962 through the 2012 season. However, the defection of all but two football-playing schools to other conferences caused the conference to drop sponsorship after fifty-one years. [52]

The following teams have won NCAA national championships while being a member of the WAC:

The WAC has also produced one AP national champion in football:

The following teams won AIAW (and forerunner DGWS) women's national championships while their universities were members of the WAC:

The WAC awards its Commissioner's Cup to the school that performs the best in each of the conference's 19 men's and women's championships.

The award is named in honor of former WAC Commissioner Stan Bates and honors the WAC's top male and female scholar-athletes, recognizing the recipients’ athletic and academic accomplishments. In addition, the awards carry a $3,000 postgraduate scholarship.

In 2014–15, the WAC initiated a new digital network to give fans high quality streaming internet access to many of its regular season games and postseason championships including volleyball, soccer, swimming and diving, basketball, softball and baseball. [72]