The West Coast Conference (WCC) is a collegiate athletic conference affiliated in NCAA Division I consisting of ten member schools across the states of California, Oregon, Utah and Washington.

All of the current members are private, faith-based institutions. Seven members are Catholic Church affiliates, with four of these schools being Jesuit institutions. Pepperdine is an affiliate of the Churches of Christ. Brigham Young University is an affiliate of The Church of Jesus Christ of Latter-day Saints (LDS). The conference's newest member, the University of the Pacific (which re-joined in 2013 after a 42-year absence), is affiliated with the United Methodist Church, although it has been financially independent of the church since 1969. [1]

During the massive upheaval of conference affiliations in the 1990s, the WCC remained very stable. Before the 2010 realignment that eventually led to Brigham Young joining the conference, the last change of membership was in 1980, when Seattle University left the conference. At the time, only the Ivy League and Pac-10 (now Pac-12) had remained unchanged for a longer period. 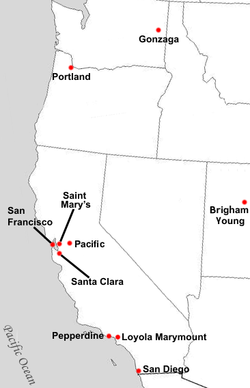 The league was chartered by five northern California institutions, four from the Bay Area ( San Francisco, Saint Mary's, Santa Clara, San Jose State) and one, Pacific, from Stockton. It began as the California Basketball Association, playing its first game on January 2, 1953. After two seasons under that name, the conference expanded to include Los Angeles-area schools Loyola (now Loyola Marymount) and Pepperdine in 1955 and became the "West Coast Athletic Conference" in 1956. After more than three decades as the WCAC, the name was shortened in the summer of 1989, dropping the word "Athletic." [2] [3] [4]

The WCC participates at the NCAA Division I level and is considered to be a mid-major athletic conference. The conference sponsors 15 sports but does not include football as one of them. San Diego ( Pioneer Football League) and Brigham Young ( FBS independent) are the only schools fielding a football team. The rest have all dropped the sport, some as early as the 1940s, before the conference existed ( Gonzaga and Portland), and one as late as 2003 ( Saint Mary's).

Historically, the WCC's strongest sports have been soccer (nine national champions, including back-to-back women's soccer titles in 2001 and 2002) and tennis (five individual champions and one team champion). The conference has also made its presence felt nationally in men's basketball. San Francisco won two consecutive national titles in the 1950s with all-time great Bill Russell. Although the WCAC's stature declined in the 1960s, San Francisco was reckoned as a "major" basketball power until the early 1980s. Also of note was Loyola Marymount's inspired run to the Elite Eight in 1990 following the death of Hank Gathers during that season's WCC championship tournament.

More recently, Gonzaga's rise to national prominence after being invited to the NCAA Tournament every year since their Cinderella run to the "Elite Eight" in 1999 has helped make the WCC a household name. As San Francisco was from the 1940s to the early 1980s, Gonzaga has gained recognition as a major basketball power, despite the WCC being a mid-major conference. Gonzaga has been to 19 consecutive NCAA Tournaments--the longest streak for any school in the Western United States, tied for the fourth longest active streak, and the seventh longest streak in history. They have also been to all but one WCC Tournament final since 1995, and have played for the conference title every year since 1998. In 2016–17, the Bulldogs advanced all the way to the national championship game—the deepest run by a WC(A)C team since San Francisco went to three consecutive Final Fours from 1955 to 1957.

Eventually, with the 2010 realignment opening up new avenues for expansion, the WCC decided to revisit expansion plans. The conference decided that it would only seek out private schools, but would not limit its search to faith-based institutions. Even so, the two additions, Brigham Young University and University of the Pacific are both faith based institutions, although Pacific has not been financially sponsored by the United Methodist Church since 1969.

On August 31, 2010, Brigham Young University (BYU) announced plans to join the WCC for the 2011–12 season in all sports the conference offers. BYU joined the conference on July 1, 2011. [5] [6] BYU's arrival gave the WCC another school with a rich basketball tradition. The Cougars made the NCAA Tournament six straight times before failing to do so in 2013, and had made 26 NCAA Tournament appearances before joining the conference.

On March 27, 2012, the University of the Pacific (UOP), a charter member of the conference in 1952, announced that it accepted an invitation to re-join the WCC on July 1, 2013. The move removed Pacific from the Big West Conference back to the WCC, which Pacific left in 1971 in order to pursue its interests in football, which it later abandoned in 1995. [7]

^ - USIU dropped its athletics program following the end of the 1990–91 school year.

The West Coast Conference sponsors championship competition in six men's and nine women's NCAA sanctioned sports, with the newest addition being softball in 2013-14. [10]

Some of the famous athletes who played collegiately for WCC schools and coaches and executives that attended WCC schools, include: