Washington Week—previously Washington Week in Review—is an American public affairs television program, which has aired on PBS and its predecessor, National Educational Television, since 1967. Unlike other panel discussion shows which encourage informal (sometimes vociferous) debates as a means of presentation, Washington Week consistently follows a path of civility and moderation. Its format is that of a roundtable featuring the show's moderator between two and four Washington-based journalists. Its current weekly moderator is Robert Costa.

Washington Week in Review was first broadcast on February 23, 1967, on NET and was picked up by PBS in 1970. Since moving to PBS, Washington Week has used a panel discussion format moderated by a host. Washington Week is on PBS's national primetime lineup. Because of the subscriber nature of PBS, local presentation of Washington Week is scheduled by individual stations, and air times vary by market. The most common airing pattern is the show leading off primetime on Friday evenings with weekend afternoon encores on most PBS member stations, and several airings per week on the affiliated network, World Channel. The program is produced by WETA-TV in Washington, D.C.

In 2006, Washington Week made an agreement with National Journal which ensured that at least one National Journal reporter would be on the show. [2] This agreement is no longer in effect. Panelists come from various national media organizations.

On January 8, 2010, Washington Week began broadcasting in high definition, with broadcasts presented in a letterboxed format for viewers with standard-definition television sets watching either through cable or satellite television. The program also introduced a new set and upconverted its existing graphics package to HD. [3][ failed verification]

Gwen Ifill was the host from the time Ken Bode was fired in 1999 [4] until her death on November 14, 2016. A successor was not announced immediately. It was Ifill who shortened the name of the program when she took over, as a sign that "the show would spend more time looking forward." [5] On April 20, 2017, WETA announced that Robert Costa of the Washington Post would become the next moderator of Washington Week. [6] Since its first episode in 1967, the program's announcer has been Paul Anthony. [7] 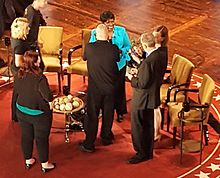 This film, television or video-related list is incomplete; you can help by expanding it with reliably sourced additions.