The Wabash Avenue Bridge (officially, Irv Kupcinet Bridge) over the Chicago River was built in 1930. Standing west of the Michigan Avenue Bridge and east of Marina City, the bascule bridge connects the Near North Side with " The Loop" area.

The single-deck, double-leaf bascule bridge was designed by Thomas Pihlfeldt and built by the Ketler and Elliot Company. [2] The American Institute of Steel Construction awarded it the "Most Beautiful" bridge in 1930. [2] 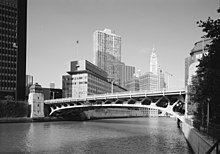