The station began operations on September 19, 1953, on UHF channel 15 as an NBC affiliate. [1] It was signed on by Peninsula Broadcasting Corporation, [2] co-owned by Hampton businessman Thomas P. Chisman and several other stockholders, along with WVEC radio (1490 AM, now WXTG; and 101.3 FM, now WWDE-FM). The station switched its affiliations to ABC in 1959, when WAVY-TV (channel 10) took the NBC affiliation two years after signing on. During the late 1950s, WVEC-TV was also briefly affiliated with the NTA Film Network. [3]

In those days, UHF stations were not as successful as VHF stations, and the Federal Communications Commission (FCC) did not yet make requirements for television sets to have UHF tuners. So on November 14, 1958, [4] WVEC-TV moved to its current location on VHF channel 13. Two years later, the channel 15 position would be occupied by current PBS member station WHRO-TV.

In 1980, Chisman sold the station to Corinthian Broadcasting, [5] a unit of Dun & Bradstreet. At the time of the sale, it was the last locally owned and operated "Big Three" station in Hampton Roads. Four years later, Dun sold Corinthian to Belo, which owned the Dallas Morning News and WFAA-TV in its home city.

In 1997, WVEC (along with The Virginian-Pilot and Cox Communications) launched LNC4 (later LNC5), a 24-hour local cable news television channel, featuring repeats of WVEC newscasts and a live 10:00 p.m. newscast which began airing on WPEN-LP back in 1995. It was carried by Cox Communications on channel 5 within Hampton Roads. Pilot 13 News at 10 ceased production on January 30, 2009, however, the partnership with the Virginian-Pilot was expected to continue on a lesser level. LNC5 was closed on December 31, 2010.

On June 13, 2013, the Gannett Company announced that it would acquire Belo. [7] The sale was completed on December 23. [8] Later on in August 2014, Gannett announced it would split its broadcast and digital holdings into a new company, Tegna; the split became official on June 29, 2015. WVEC was retained by the latter company. After the acquisition, the station was standardized on air as 13 News Now though still using the ABC logo on screen.

in February 2018, the logo for WVEC was updated along with a new theme curated by Sixième Son entitled "C Clarity" used for the newscasts.

WVEC discontinued regular programming on its analog signal, over VHF channel 13, on June 12, 2009, as part of the federally mandated transition from analog to digital television. [11] The station's digital signal relocated from its pre-transition UHF channel 41 to VHF channel 13.

There is one low-powered translator of WVEC that is located in the Eastern Shore of Virginia and is municipally-owned by Accomack County rather than Gannett. [12] WVEC and Tegna Media does not own and operate any translators in the Greater Hampton Roads area. 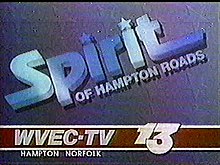 In the late 1980s, WVEC-TV introduced its most well-known promotional campaign, "The Spirit of Hampton Roads" – a campaign which has been customized and used by several other Belo Corporation stations (most notably the originator, WFAA-TV's "Spirit of Texas" campaign and the extremely successful "Spirit of Louisiana" from New Orleans' WWL-TV). The campaign was revamped in September 1992 with a new logo and song composed by Nashville-based 615 Music. WVEC originally dropped it in 1996 and replaced it with another slogan, "Working for You". "The Spirit of Hampton Roads" would finally return in 2003 on New Year's Eve. WVEC phased out the "Spirit" image for the second time in 2008.

In 1978, upon the resignation of news anchor Tony Burden, WVEC-TV hired ABC News correspondent Jim Kincaid as its main news anchor. [13] Kincaid's signature became his "Jim's notes", short commentaries which ended the station's nightly newscasts. Compilations of these essays were published in several books authored by Kincaid, including Notes from Elam, referring to the small town in Prince Edward County, Virginia, where his farm was located. During the Vietnam War, Kincaid was a war correspondent for ABC. He returned to Vietnam in 1994 and reported from the same locations he had covered in the 1960s, producing an award-winning documentary and series of news stories. Kincaid retired from channel 13 in 1997; he died in July 2011. [14]

Another well-known news anchor for WVEC-TV was Terry Zahn, who was hired from WAVY-TV in 1994. [15] Zahn was very active with the American Cancer Society and helped establish the Relay for Life in the area. He produced two videos about Relay for Life which were distributed nationally, and served as chairman of the local Relay, which at the time was the largest in the U.S. Zahn was diagnosed with bone cancer in 1997, but remained with channel 13 until his death in January 2000. [15] Each year, the American Cancer Society presents the Terry Zahn Award to a supporter of the Relay for Life. He was inducted into the National Relay Hall of Fame in 1999.

Hampton Roads TV news veteran Barbara Ciara began her career in the market at WVEC-TV, before joining WAVY-TV in 1983. Ciara rejoined channel 13 in 1989 and anchored evening newscasts for the station until defecting to rival CBS affiliate WTKR (channel 3) in 2000.

On March 7, 2003, former investigative reporter Craig Civale and former general assignment reporter Michelle Louie were engaged during a live segment of "Joe's Job" on 13News Daybreak. Louie was filling in for fellow reporter Joe Flanagan, when she was to visit a jewelry shop. During a live shot, out came Civale with ring in hand, where he proposes to Michelle. They both, at the time, had been dating for five years. They were married in September 2004. [16]

WVEC began using Gannett's graphics and "This Is Home" package on July 24, 2014. The conversion happened during storms and debuted in "Storm Mode". [17]