WFMY-TV, virtual channel 2 ( UHF digital channel 35), is a CBS- affiliated television station licensed to Greensboro, North Carolina, United States and serving the Piedmont Triad region (Greensboro– Winston-Salem– High Point). The station is owned by Tegna Inc. WFMY's studios are located on Phillips Avenue in Greensboro, and its transmitter is located in Randleman. The station is carried on cable channel 9 in most parts of the market. 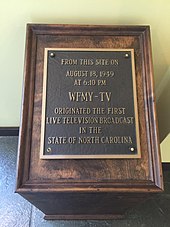 WFMY's facility was the site of the first live television broadcast in the state of North Carolina on August 18, 1949 at 6:10 pm and officially signed on the air on September 22, 1949 as the second television station in North Carolina, debuting just a few months after fellow CBS affiliate WBTV in Charlotte. It was originally owned by the Greensboro News Company, publishers of the Greensboro Daily News and Daily Record (now merged as the Greensboro News & Record). The News Company had put WFMY-FM on the air in 1947, but it shut the radio station down in the early part of the 1950s, eventually selling the license in 1955. The new owner brought it back on-the-air as WQMG-FM (97.1).

WFMY-TV has been a primary CBS affiliate from its sign-on, but also initially carried secondary affiliations with NBC, ABC and DuMont. NBC programming moved to WSJS-TV (channel 12, now WXII-TV) when it signed on in September 1953. WFMY also shared the ABC affiliation with WSJS until October 1963 when WGHP (channel 8, now a Fox affiliate) signed on. WFMY lost the DuMont affiliation when that network ceased operations in 1956. By the late 1950s, the station had moved to its current studio facility on Phillips Avenue, and also built a new transmitter there. In 1980, it built its current tower in Randleman.

In October 2012, Gannett entered a dispute against Dish Network regarding compensation fees and Dish's AutoHop commercial-skip feature on its Hopper digital video recorders. Gannett ordered that Dish discontinue AutoHop on the account that it is affecting advertising revenues for WFMY. Gannett threatened to pull all of its stations (such as WFMY) should the skirmish continue beyond October 7 and Dish and Gannett fail to reach an agreement. [1] [2] The two parties eventually reached an agreement after extending the deadline for a few hours. [3]

During the analog television era, WFMY boasted one of the largest signal coverage areas in the Southeastern United States. It provided grade B coverage as far south as Charlotte and as far east as Raleigh; its transmitter is located almost halfway between the two cities. The channel 2 signal traveled a very long distance under normal conditions. It appeared in The Charlotte Observer television listings well into the 1990s, in part because it frequently aired network shows that were preempted by Charlotte's WBTV–mainly game shows and cartoons. It appeared in The News & Observer television listings well into the turn of the millennium.

WFMY-TV shut down its analog signal on June 12, 2009, as part of the FCC-mandated transition to digital television for full-power stations. [6] The station's digital signal remained on its pre-transition UHF channel 51, using PSIP to display WFMY-TV's virtual channel as 2 on digital television receivers. On May 15, 2020, under the provisions of the FCC's spectrum reallocation program, WFMY's transmissions moved to channel 35, while continuing to display channel 2 as its virtual channel.

WFMY's local programming, which includes the long-running news program The Good Morning Show with Lee Kinard and children's program The Old Rebel Show, preempted CBS' various attempts at morning programming from 1957 through the 1980s. WGGT (channel 48, now WMYV) aired the CBS Morning News until 1985; WFMY then began to run the program on tape delay from 8 to 10 a.m. following The Good Morning Show. Lee Kinard later moved to the station's weeknight newscasts until he retired in the 1990s. Another important local daytime program from the 1970s was Sandra and Friends, hosted by longtime news anchor Sandra Hughes. This was one of the first television programs in the region to be hosted by an African-American female.

Since March 2013, WFMY has also carried Let's Make a Deal at 10 a.m., following CBS This Morning. Prior to then, the program aired on WFMY at its recommended 3 p.m. slot, where a double-run of The Andy Griffith Show relocated after the scheduling change. In September 2016, Andy Griffith was moved to 4 p.m., switching timeslots with Ellen.

On December 2, 2019, WFMY instituted a number of changes to its daytime schedule, moving CBS This Morning to its recommended time of 7 a.m., followed by Ellen at 9 a.m. This meant dropping the last hour of The Good Morning Show, which had been airing from 4:30 to 8 a.m. Ellen was replaced at 3 p.m. by Daily Blast Live and the daytime episode of Jeopardy!. Finally, WFMY joined WGHP and WXII with a 4 p.m. newscast, as well as replacing its 2 Wants to Know at 5:30 with another half-hour of news. All this meant that Andy Griffith is being seen only on weekends. The station also added the Saturday edition of CBS This Morning at 7 a.m. effective December 7, with the Saturday edition of The Good Morning Show airing from 5 to 7 a.m. [7] Also in December 2019, WFMY began clearing the full hour of Face the Nation from 10:30 to 11:30 a.m. on Sundays, with In Touch following at 11:30.[ citation needed]

WFMY-TV presently broadcasts 38 hours of locally produced newscasts each week (with six hours each weekday, three hours on Saturdays and five hours on Sundays). On January 5, 2010, beginning with its noon newscast, WFMY began broadcasting its local newscasts in widescreen standard definition; pre-recorded stories and live remote video were also presented in the format.[ citation needed] On July 27, 2011, WFMY aired a news story claiming there had been a "series" of "violent flash mob" attacks at a downtown Greensboro park. [8] The report made numerous allegations that were not substantiated and were subsequently refuted by the Greensboro Police Department. [9]

On the evening of September 25, 1984, the station's Bell JetRanger news helicopter, "Sky 2", crashed while attempting to assist in the rescue of a construction worker trapped atop a water tower in Kernersville (near Winston-Salem). The tower was being dismantled when a piece of steel snapped and trapped the worker for hours, causing him to bleed profusely; "Sky 2" was called in to assist in the rescue. Pilot Tom Haroski began lowering the chopper above the tower, as an EMS worker on board was preparing to rescue the man. The chopper's tail rotor hit one of the steel beams as it hovered over the tower, sending it spiraling nose first into the ground, killing Haroski and the rescue worker instantly (it was later determined that the construction worker had bled to death before the chopper ever took off). Video of the accident was captured by competitor WXII-TV and was broadcast around the country. [10] WFMY began using a new version of "Sky 2" (painted black) after the accident, but eventually retired the chopper altogether.

On November 13, 2011 beginning with its 11 p.m. newscast, WFMY began broadcasting its newscasts in high definition. The station also introduced a new format for its newscasts titled News 2.0. [11] On April 25, 2013, WFMY debuted a news/investigative program, 2 Wants To Know; it replaced a third daily airing of The Andy Griffith Show in that program's longtime 5:30 p.m. slot, a move which has angered some viewers, as indicated in stories in the Greensboro News & Record and the Winston-Salem Journal.

During the 1970s and 1980s through CATV, WFMY was once carried in Rockingham, Southern Pines and Henderson in North Carolina, and Rocky Mount and Clifton Forge in Virginia. [13]