From Wikipedia, the free encyclopedia
‹ The template Infobox company is being considered for merging. ›

Volcom is a lifestyle brand that designs, markets, and distributes boardsports-oriented products. Volcom is headquartered in Costa Mesa, California, United States (U.S.). Volcom is known for its trademark stone logo, its slogan True to This, and the Let the Kids Ride Free campaign. [3] Todd Hymel is the CEO of Volcom. [4]

Volcom was founded in 1991 by Richard "Wooly" Woolcott and Tucker "T-Dawg" Hall, who based the ethos of the company on their own experiences with boardsports. [5] In March 1991, the two friends went on a snowboarding trip to Tahoe, U.S., and afterward, they decided to start a clothing company for women. [6]

Chet Thomas was the first professional skateboarder to be sponsored by the brand. [7] In 1995, Volcom was the first action sports company to create a record label, Volcom Entertainment. [8]

In April 2005, the company adopted its current name, "Volcom, Inc." Volcom became a publicly traded entity on June 29, 2005, when Wachovia Securities, D.A. Davidson and Piper Jaffray underwrote an initial public offering on NASDAQ. They priced 4.69 million shares at US$19 a share, raising a total of US$89 million.[ citation needed]

In early 2008, Volcom made its first acquisition, taking ownership of Electric Visual Evolution LLC for US$25.3 million. [9] In early 2016, Kering announced Eric Crane had acquired the brand from Volcom for an undisclosed amount. [10]

On May 2, 2011, French luxury, sport, and lifestyle group Kering (previously known as Pinault-Printemps-Redoute and PPR until 18 June 2013) launched a friendly takeover offer to buy Volcom Inc. for US$24.50 a share, valuing the company at US$608 million. [11] Volcom's board unanimously backed the Kering offer, and shareholders were advised to tender their shares to the French company.[ citation needed]

Since the takeover, Kering has sought to expand and diversify the Volcom brand. [12] The support from Kering allowed Volcom to launch its first ever closed-toe footwear line in July 2013. [13]

On April 3, 2019, Authentic Brands Group had announced it acquired Volcom from Kering. [14]

Volcom's first retail store was opened on November 23, 2002, in Los Angeles. [15] Since then, seven more Volcom stores have opened in the United States, and six more in Canada. [16] 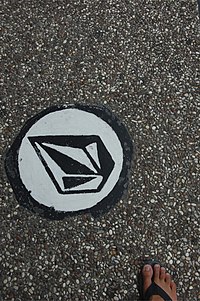 In 2012, Volcom collaborated with Volcom ambassadors POSSO for the second time. POSSO is described by the brand as "2 best friends from Northern California with a love for art, design, fashion, and music." The collection included dresses and a bikini outfit. [30]

The 2013 Volcom Pipe Pro surf competition that took place between January 27 and February 7, 2013, has been designated as a Deep Blue Surfing Event as it completed the ASP ( Association of Surfing Professionals) Green Guidelines Recommendations. The event strove to reduce the environmental impacts of a professional surfing contest and to provide social benefits for the local community. [31]

The 2014 Volcom Pipe Pro surf competition took place between January 26 and February 7, 2014, at the Banzai Pipeline with waves at 8–12 feet, and was televised on Saturday, June 7, 2014, on NBC. The competition is an ASP, WQS (World Qualifying Series) 5-Star Event with a $130,000 prize purse, and once again has been designated as a Deep Blue Surfing Event, working with Sustainable Surf, a waste diversion company. [32]

Volcom created the "V.Co-logical Series" collection, whereby one percent of sales are donated to environmentally focused non-profit organizations. The company is a member of the "1% for the Planet" initiative. [33]

In 2010, Volcom won the TransWorld Business Industry and Retail Award: “Brand of the Year”. [36] Also in 2010, Woolcott was nominated for the Entrepreneur of the Year Award at Chapman University by the Leatherby Entrepreneurship Center. [35]