Vineland was formed on July 1, 1952, through the merger of Landis Township and Vineland Borough, based on the results of a referendum held on February 5, 1952. [3] [24] [25] Festivities on July 1, 1952, when the merger took effect, included a parade and speeches from such notables as Senator Estes Kefauver. [26] The name is derived from the plans of its founder to use the land to grow grapes. [27] [28]

Vineland was established as a temperance town, where the sale of alcohol was prohibited. Landis required that purchasers of land in Vineland build a house on the purchased property within a year of purchase, that 2 1⁄2 acres (10,000 m2) of the often heavily wooded land be cleared and farmed each year, and that adequate space be placed between houses and roads to allow for planting of flowers and shade trees along the routes through town. Landis Avenue was constructed as a 100-foot (30 m) wide and about 1-mile (2 km) long road running east–west through the center of the community, with other, narrower roads connecting at right angles to each other. [31]

After determining that the Vineland soil was well-suited for growing grapes (hence the name), Landis started advertising to attract Italian grape growers to Vineland, offering 20 acres (81,000 m2) of land that had to be cleared and used to grow grapes. Thomas Bramwell Welch founded Welch's Grape Juice, and purchased the locally grown grapes to make "unfermented wine" (or grape juice). [31] The fertile ground also attracted the glass-making industry and was home to the Progresso soup company. Throughout the first half of the 20th century, most of the city was involved in the poultry industry, which led to the city being dubbed "The Egg Basket of America." [32]

Vineland Poultry Laboratories (operations were closed by Lohmann Animal Health in 2007) was started by Arthur Goldhaft. Dr. Goldhaft is credited with putting "a chicken in every pot" after developing the fowl pox chicken vaccine that saved millions of chickens from death. Dr. Goldhaft's work at Vineland Poultry Laboratories in Vineland helped protect the world's chicken supply from the fowl pox disease. [33] 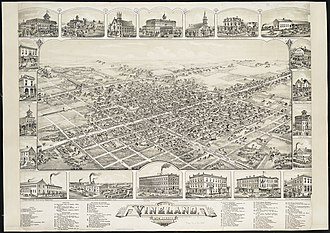 Vineland had New Jersey's first school for the intellectually disabled, the Vineland Developmental Center, which now has an east and west campus. These institutions housed mentally handicapped women in fully staffed cottages. Henry H. Goddard, an American psychologist, coined the term " Moron" while directing the Research Laboratory at the Training School for Backward and Feeble-minded Children in Vineland. This facility was so sufficiently well known that one American Prison Association pamphlet in 1955 heralded Vineland as "famous for its contributions to our knowledge of the feebleminded". [34]

The city of Vineland celebrated its 150th birthday in 2011. Mayor Robert Romano initially ordered a custom cake from Buddy Valastro of Carlo's Bake Shop in Hoboken; the business is featured in the TLC reality television series Cake Boss. After outcry from local business owners, the order was canceled and five Vineland bakeries were commissioned to create elaborate cakes for the event. [35]

Since the 1970s, the city has had an annual dandelion festival. Brought to the area by early Italian immigrants, the plant is grown as a crop by farms in Vineland. [36]

Unincorporated communities, localities and place names located partially or completely within the city include Clayville, Hances Bridge, Leamings Mill, Menantico, North Vineland, Parvins Branch, South Vineland, Willow Grove and Pleasantville. [39] That last community (adjacent to Newfield Boro) is not to be confused with the City of Pleasantville in Atlantic County.

Vineland has a diverse community composed of a variety of races. People of various backgrounds of Europe, Eurasia, Africa, and the Americas makeup the collective of the community.

The marquee of the Landis Theater

Portions of the city are part of a joint Urban Enterprise Zone (UEZ) with Millville, one of 32 zones covering 37 municipalities statewide. Millville was selected in 1983 as one of the initial group of 10 zones chosen to participate in the program. [57] In addition to other benefits to encourage employment and investment within the Zone, shoppers can take advantage of a reduced 3.3125% sales tax rate (half of the ​6 5⁄8% rate charged statewide) at eligible merchants. [58] Established in October 1988, the city's Urban Enterprise Zone status expires in December 2023. [59]

The main street in Vineland is Landis Avenue. The traditional downtown area is located several blocks east and west of the intersection of Landis Avenue and the Boulevard. The Boulevard is a pair of roads that flank the main north–south railroad, which connected Vineland with Cape May to the south and Camden/ Philadelphia to the north. After many years of decline, there has been much recent activity to restore the vitality of "The Avenue" and the center city area. New construction includes a new transportation center, courthouse, post office, elementary school / community center and sidewalk upgrades. In 2005, Vineland was designated a Main Street Community and, through the work of this group, money has been earmarked to continue this improvement through property and facade improvements, business retention and marketing. [60]

The City of Vineland is governed within the Faulkner Act, formally known as the Optional Municipal Charter Law, under the Mayor-Council (Plan A), implemented based on the recommendations of a Charter Study Commission as of July 1, 1952, months after the city's formation. [61] The city is one of 71 municipalities (of the 565) statewide that use this form of government. [62] The governing body is comprised of the Mayor and the five-member City Council. The mayor serves as the city's chief executive, while the City Council is its legislative branch. The mayor and council are elected at-large to serve concurrent four-year terms of office in non-partisan elections held in leap years as part of the November general election. [8] [4] An ordinance passed by the council in 2011 shifted elections from May to November, effectively extending the term of those members serving at the time by six months. [63]

As of 2020 [update], the Mayor of Vineland is Anthony Fanucci whose term of office ends on December 31, 2020, along with those of all members of the City Council. [64] Members of the Vineland City Council are Council President Paul F. Spinelli, Council Vice President David Acosta, Elizabeth Arthur (elected to serve an unexpired term), Ronald John Franceschini Jr. and Albert Vargas. [4] [65] [66] [67]

In November 2019, the City Council appointed Elizabeth Arthur to fill the seat vacated by Angela Calakos following her resignation after announcing that she was moving out of the city. Arthur served on an interim basis until the November 2019 general election, when she was elected to serve the balance of the term office. [68]

For the 2020–2021 session ( Senate, General Assembly), the 1st Legislative District of the New Jersey Legislature is represented in the State Senate by Mike Testa ( R, Vineland) and in the General Assembly by Antwan McClellan (R, Ocean City) and Erik K. Simonsen (R, Lower Township). [77] [78]

Students are also eligible to attend Cumberland County Technology Education Center in Vineland, serving students from the entire county in its full-time technical training programs, which are offered without charge to students who are county residents. [126] The school relocated starting in the 2016–17 school year to a 200,000 square feet (19,000 m2) campus in Vineland constructed at a cost of $70 million and located next to Cumberland County College. The school initiated a new full-time high school program that included 240 students who will be part of the initial graduating class of 2020. [127]

Cumberland Christian School is a private coeducational day school located in Vineland, serving students in pre-kindergarten through twelfth grade. The school, founded in 1946, has a total enrollment of over 1,000 students. [128]

The city is home to two Catholic elementary schools, Bishop Schad Regional School (combining St. Francis and Sacred Heart Schools) [129] and St. Mary Regional School [130] Both schools operate under the supervision of the Roman Catholic Diocese of Camden. [131] Sacred Heart High School served grades 9-12 from 1927 until its closure by the Camden Diocese in June 2013 due to declining enrollment. [132]

The Ellison School was a private, nonsectarian coeducational preK-8 day school located on South Spring Road in Vineland. The school was founded in 1959 as a grade 1-3 school, [133] and moved to its current site in 1968. [134] By 2016 enrollment had dropped to the point where closure was considered. By late 2019 the school had 11 instructors, three assistants to the instructors, and 76 students. [133] Ellison closed in December 2019. 25 of the students moved to the PreK-8 Christian school Edgarton Christian Academy, then in Newfield, which planned to move to Buena. [135]

Clear Communications owns two locally licensed radio stations; WVLT (92.1) and WMIZ (1270), with WPOV-LP (107.7) owned by the local branch of Calvary Chapel. Vineland is also the city of license for WUVP-DT (channel 65), Philadelphia's Univision station, which has studios in Franklin Township and their news operation and transmitter based in Philadelphia proper.

Route 47 (Delsea Drive) runs almost 9.5 miles (15.3 km) north-south in the western quarter of the city, connecting Millville in the south to Franklin Township in Gloucester County at the city's northern tip. [147] Route 55 enters the city from Millville for 1.4 miles (2.3 km), heads back into Millville and re-enters Vineland, running along the western border for 8.8 miles (14.2 km) and heads north into Pittsgrove Township in Salem County. [148] Route 56 (Landis Avenue) heads across the city from Pittsgrove Township to its eastern terminus at Route 47. [149]

People who were born in, residents of, or otherwise closely associated with Vineland include: