From Wikipedia, the free encyclopedia
(Redirected from Utah juniper)
Species of plant

The shoots are fairly thick compared to most junipers, 1.5–2 mm diameter. The leaves are arranged in opposite decussate pairs or whorls of three; the adult leaves are scale-like, 1–2 mm long (to 5 mm on lead shoots) and 1–1.5 millimetres (0.039–0.059 in) broad. The juvenile leaves (on young seedlings only) are needle-like, 5–10 mm long. The cones are berry-like, 8–13 millimetres (0.31–0.51 in) in diameter, blue-brown with a whitish waxy bloom, and contain a single seed (rarely two); they mature in about 18 months and are eaten by birds and small mammals. [2] The male cones are 2–4 millimetres (0.079–0.157 in) long, and shed their pollen in early spring. It is largely dioecious with both sexes on the same plant, but around 10% of plants are monoecious, producing cones of only one sex.

The plants frequently bear numerous galls caused by the Juniper Tip Midge Oligotrophus betheli ( Bibionomorpha: Cecidomyiidae); these are conspicuous pale violet-purple, produced in clusters of 5–20 together, each gall 1–2 centimetres (0.39–0.79 in) diameter, with dense modified spreading scale-leaves 6–10 millimetres (0.24–0.39 in) long and 2–3 millimetres (0.079–0.118 in) broad at the base.

Seeds are dispersed by a variety of mammals and birds. Mammals include jackrabbits (mostly the black-tailed jackrabbit Lepus californicus spp.) rodents and to a lesser extent by coyotes ( Canis latrans). [3] Most notable among the birds that disperse juniper berries is the Townsend's Solitaire (Myadestes townsendi). [4] 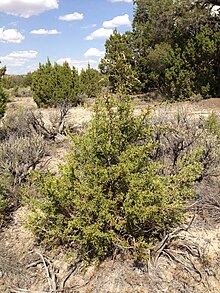 Juniperus osteosperma seedling along I-80 in northeastern Nevada

Native Americans such as the Havasupai used the bark for a variety of purposes, including beds, and ate the cones both fresh and in cakes. [5] The Havasupai used the gum to make a protective covering over wounds. Additionally, the Yavapai gave their women a tea made from the leaves to calm their contractions after giving birth, and fumigated them with smoke from the leaves placed over hot coals. The Navajo sweep their tracks with boughs from the trees so death will not follow them. [6]

A small quantity of ripe berries can be eaten as an emergency food or as a sage-like seasoning for meat. The dried berries can be roasted and ground into a coffee substitute. [7]